Day Deux of Joe Scarborough's campaign against public figures making the "hands up, don't shoot" gesture to falsely suggest that Michael Brown was doing the same during his confrontation with Ferguson police officer Darren Wilson.

As reported here, yesterday the Morning Joe host took to task the St. Louis Rams players who made the gesture, and the liberal media that has abetted their implicit allegation.  Today, while continuing his righteous rant against the Rams, Scarborough also castigated the three congressmen who took to the floor of the House yesterday to make the gesture.  No fewer than five times, Scarborough called the notion that Brown had his hands up a "lie."

Note: this Newsbuster is irked by the weaselly statement put out by a Rams exec claiming that it is possible to balance support for law enforcement with "our players' First Amendment rights."  Fact: private sector employees have very limited free speech rights, and certainly not the right to make highly controversial public gestures as they did.  How do you think the Rams and the NFL would react if players entered the field bearing signs reading "Goodell must go," "Rams ticket prices are a rip-off," or, heaven forbid, condemning the Ferguson arsonists and looters?

Note Segundo: Calling on Mika to have the gumption to take a stand, one way or the other, on the issue.  Once again today, Brzezinski contented herself with making a variety of facial gestures, adding only this enigmatic statement at segment's end: "It's definitely the other side of the story."

WILLIE GEIST: Conflicting accounts now whether a top official with the St. Louis Rams apologized for five players who five players who made the hands up don't shoot gesture before Sunday's game. County police chief Jon Belmar said he spoke with the executive vice president of football operations who apologized. The police chief said it was a heartfelt phone call with the official who regretted that the gestures may have minimized the work of the police departments and officers. The Rams official however now denies ever apologizing. He says in part, "in none of these conversations did I apologize for our players' actions. I did say in each conversation that I regretted any offense their officers may have taken. We do believe it's possible to both support our players' First Amendment rights and to support the efforts of local law enforcement." That's an executive vice president of football operations for the Rams.

JOE SCARBOROUGH: The NFL, don't they have the right tell players not to wear socks a certain way. I mean they get told everything  about them.

GEIST: Whether or not you think the Rams players should be punished, within the NFL if their socks are down, they are not the right height you get fined. If you dance too long in the end zone you get fined for it. They have these crazy rules to keep the brand uniform, to keep everybody on message.

GEIST: These are elected officials.

MIKA BRZEZINSKI: Hold on a second.

SCARBOROUGH: Like I said yesterday, why don't they put flying saucers on top of their heads and say if only Michael Brown had not been transported up to Venus -- it's just horrible. When will aliens stop coming down here and transporting people to Venus? This flying saucer on my head is an indication we can no longer stand for aliens -- come on! It's not the truth, and you know it's not the truth and you're going on the House floor suggesting that police officers who put their lives on the line are shooting people with their hands in the air when you know it's a lie. What's wrong with you? Let's move on.

BRZEZINSKI: It's definitely the other side of the story. 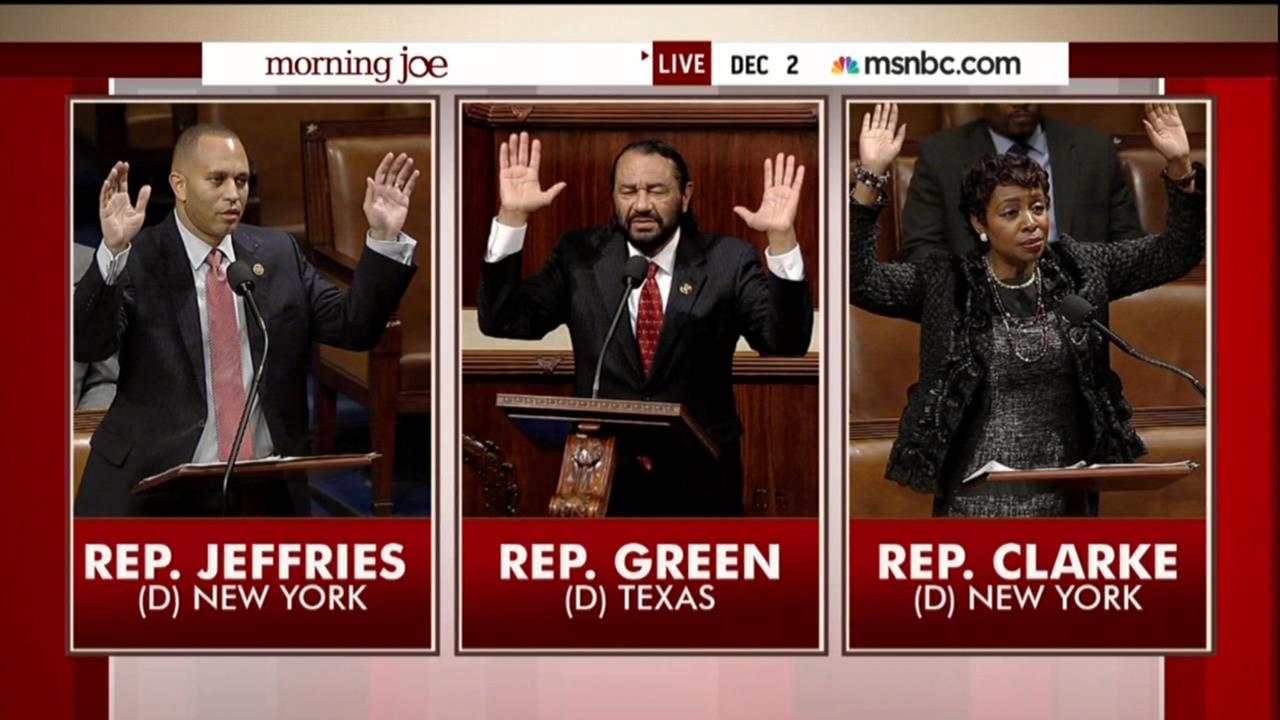