In covering Hillary Clinton’s recent rollout of her economic agenda for the country, the Spanish-language MundoFox network provided an uncritical platform for the leading Democratic candidate’s attack against Republican rival, Jeb Bush, for his comment about the need for people to work longer hours.

MundoFox, which so far has not provided a full report on major Clinton scandals like the controversy over foreign contributions to the Clinton Foundation, did not include any response from Bush, much less provide pertinent background on the former Florida Governor’s actual remarks. In his original remarks, Bush was making the point that ObamaCare has pushed some employers to cut workers’ hours from 40-hour to 30-hour workweeks. 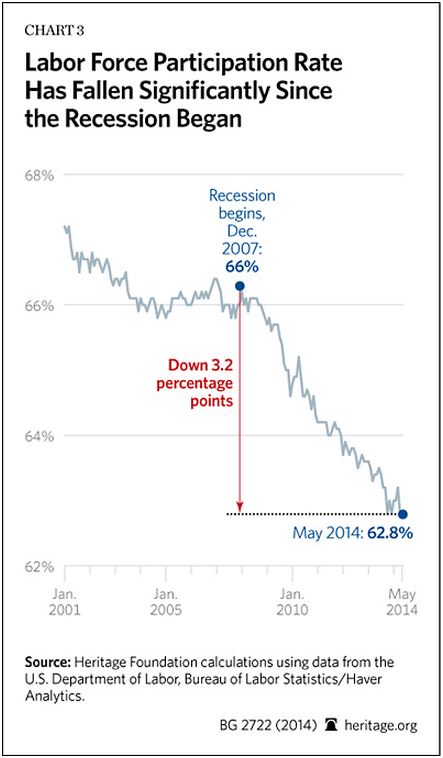 Under the Obama administration, the U.S. labor force participation rate has hit a low 62.8%, a rate not seen since 1978. The chart below from the Heritage Foundation illustrates this phenomenon in the U.S. workforce.

The complete transcript of the segment of the referenced national newscast appears below:

ROLANDO NICHOLS, ANCHOR: Democratic presidential hopeful Hillary Clinton lashed out against her Republican adversary, Jeb Bush, during the presentation of her economic agenda. She criticized the former Florida Governor for saying last week that people need to work longer hours. In addition to promising to increase middle class income, Clinton pledged to discipline the excesses of financial companies.