Pinocchio Test: Is Univision as 'Fair and Balanced' as Anchor Says?

During a recent interview on CNN, Univision anchor María Elena Salinas made the bold claim that her network’s news coverage is "fair and balanced." The credibility of Salinas’ claim, however, is seriously undermined by the network’s recent track record covering U.S. political news.

MRC Latino’s inaugural study of the nation’s two leading Spanish-language television newscasts, Noticiero Univision and Noticiero Telemundo, was released in April of 2014 and found that in some 667 stories about U.S. politics and policy, more than six times as many tilted left/liberal (300 or 45%) as slanted in a right/conservative direction (43, or 6%). The remaining 324 stories (49%) presented a balanced or neutral discussion.

The study determined the prevailing tilt of a story by tallying all statements from journalists and quoted sources that articulated either a recognizably liberal or conservative point of view on a given subject. If the total of these comments were tilted in either direction by a greater than three-to-two margin, then the story was scored as having either a “liberal” or “conservative” spin. Otherwise, the story was classified as “neutral” or “balanced.”

The prevailing leftward tilt of the news was actually more pronounced on Univision than Telemundo, with 168 (50%) of 339 U.S. political/policy stories on Univision tilting leftward, compared with 146 (43%) neutral/balanced and 25 (7%) right/conservative.

Overall, Democratic politicians - led by President Obama, Obama administration officials and congressional Democrats - along with spokespeople for left-leaning advocacy organizations - were quoted nearly three times as often as their Republican and conservative counterparts (1,011 to 370 appearances and/or direct quotations) on Univision and Telemundo.

Not exactly the kind of results you would expect of a network that is such a stickler for honest journalism, as Salinas vehemently maintained in her interview with CNN’s Brian Stelter.

How about more recent examples? Could it be that Univision has corrected course since last year?

In April of this year, Univision News President Isaac Lee actually explicitly stated that the network’s approach to journalism is not centered on being “fair and balanced,” but rather on promoting a particular agenda. Speaking of the role of Salinas’ co-anchor, Jorge Ramos, Lee said the following.

ISAAC LEE, PRESIDENT, UNIVISION NEWS: Univision’s audience knows that Jorge is representing them. That he is not asking the questions to be celebrated as a fair and balanced journalist. He’s asking the questions to represent them. He’s going to ask the person whatever is necessary to push the agenda for a more fair society, for a more inclusive society and for the Hispanic community to be better [emphasis added].

Since the launch of MRC Latino, blatant liberal bias has continued to rear its ugly head in the network’s news coverage, on a regular basis. Below is a sampling, of seven egregious examples: 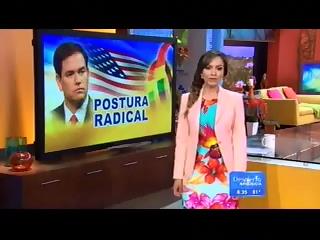 Talking about a “cautious” use of graphics, here’s a news segment on the network’s morning show, Despierta América, which flashes a “Radical Posture” headline next to a picture of Senator Marco Rubio as the newscaster describes Rubio’s far from radical, standard conservative position on the constitutional question before the United States Supreme Court on the subject of same-sex marriage (a posture so “radical” that it was also held, until just a few months ago, by none other than Hillary Clinton).

Brazen cheerleading was the order of the day as Hillary Clinton announced her support of U.S. citizenship for millions of unauthorized immigrants in the country, in addition to the expansion of the Obama administration’s current policies of amnesty and non-enforcement of federal immigration law. In addition to the entirely celebratory coverage of Clinton’s announcement on Univision’s flagship newscast - with critical voices nowhere to be found, the network featured Clinton’s newly-minted national political director, Amanda Rentería, tasking Univision with questions to ask of Republican rivals Jeb Bush and Marco Rubio.

AMANDA RENTERÍA, CLINTON POLITICAL DIRECTOR: Please, ask Jeb Bush or Senator Rubio, where are they on citizenship for people who will be covered by immigration reform, if it passes? 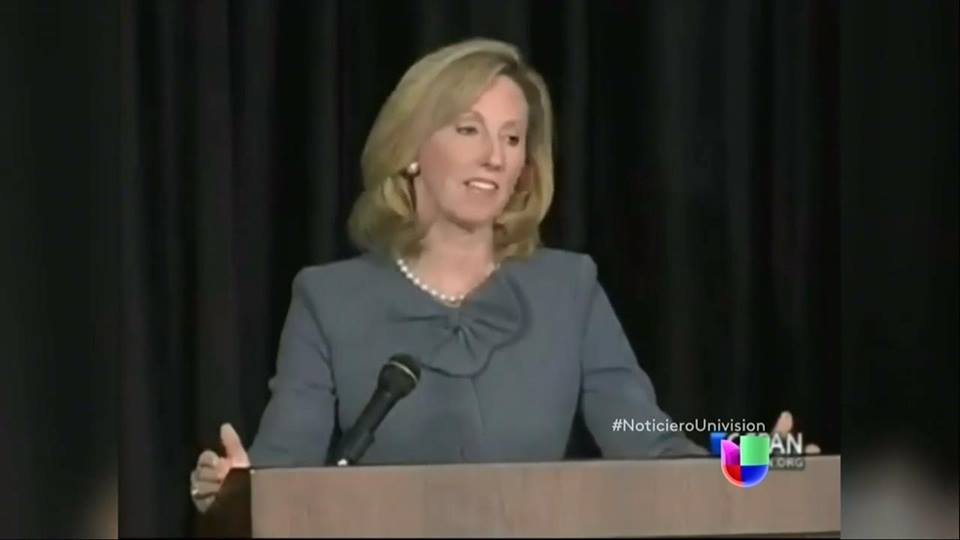 Univision continued its long, storied history of depicting border-security conservatives in an unfavorable light, regardless of the soundness of their proposals or the reasoning behind them. Here’s an example from the network’s coverage of an October 2014 debate between the candidates for an open congressional seat in Northern Virginia.

In keeping with its long record of anti-law enforcement news coverage, the nation’s largest Spanish-language network, Univision, failed to include the United States Border Patrol’s perspective about the findings of a new internal agency investigation that exonerated 64 of 67 Border Patrol agents involved in shooting incidents while in the line of duty between 2010 and 2012.

The opening rally of Hillary Clinton’s presidential campaign was the subject of fawning coverage on the nation’s top Spanish-language network, Univision. The network failed to include a single critical voice in its report on Clinton’s speech at the rally.

New polling showing high levels of dissatisfaction with the Obama administration’s handling of federal immigration policy, as well as majority support for doing “a lot” more to reduce illegal immigration, has been ignored by the nation’s top Spanish-language television networks. According to the latest Pew Research Center survey, 56% of adults disapprove of President Obama’s handling of the nation’s immigration policy. Even among Hispanics, disapproval of the President’s handling of the issue (48%) exceeds approval (44%).

Univision edited and condensed an interview done by its sister network, Fusion, in such manner as to cast Senator Ted Cruz in an unfavorable light with the network’s viewership. It did so by omitting segments highly relevant to its audience.