President Biden's approval among Hispanics continues to plummet, and the networks that cater to the nation's largest minority are doing the near-impossible to avoid covering it.

Willow the cat, Queen Elizabeth seeking a new maid, a Mexican anchor losing it on-air over vaccine hesitancy, and even Mexican President AMLO's second bout with COVID, all garnered more time and attention than Biden's polling crater with Hispanics. Only Univision – and on New Year’s Eve while nobody was watching – offered their audience a brief flash of the bad news. 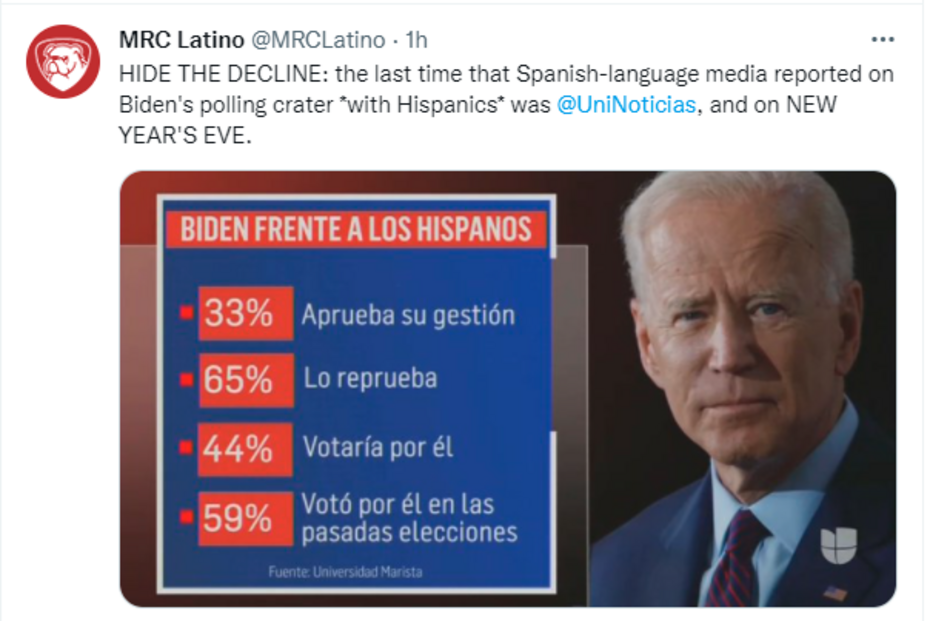 According to the PBS/Marist mid-December 2021 poll, 65% of Latinos disapprove of Biden's performance. And while 59% of those registered as Hispanics voted for Biden, at the one-year mark, the change is drastic: now, 56% would NOT vote for him.

In January, another damaging survey, this time from Quinnipiac University and released on January 12, 2022, has 51% of Hispanics disapproving “the way Joe Biden is handling his job a president"; again, the networks looked the other way.

As the Hispanic demographic continues to grow and become a vital part of the nation´s political scenario, those who watch Spanish-language television, and follow them on other platforms, deserve frank, open access to information directly relating to their well-being as American citizens.

At MRC Latino, we look forward to that.

The evident cancelling of important information for Hispanics on Spanish-speaking media is brought to you by advertisers like Honda. Call them out here.