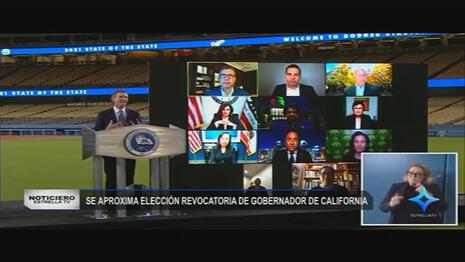 Hispanics in California are the only racial group in favor of recalling (54%) Democrat governor Gavin Newsom, per the most recent Emerson/Nexstar poll. But this new data may come as a shock to viewers of the nation´s Spanish-speaking media, which has gone silent on the recall after initially boosting Newsom and pushing his campaign talking points.

California is the state with the nation´s largest Hispanic population, one that represent the biggest chunk of viewership for the Latino corporate media, and the Los Angeles market is its crown jewel. It is to this cherished audience that the networks promote their liberal darling- with reports that portray the struggling governor as a messiah for Spanish-speaking undocumented immigrants.

We noted the effort to save Newsom as early as January of this year, when the networks reported on his loosening of draconian COVID measures without ever mentioning the effort to gather signatures for the recall. The networks hyped his lockdowns, and downplayed his flouting of the rules (remember the French Laundry scandal?). Clearly, they have shown themselves to have a vested interest in Newsom's survival.

But despite the media´s adulation, California Hispanics by and large disapprove of Newsom and want him OUT. The networks don't seem to have as much sway as they think they do. Other important findings from the poll show that the race is tightening, with 46% of voters in general in favor, and 48% against the recall election.

Likewise, a majority of Republicans (80%) and Independents (54%) are in favor of the recall. Democrats are largely in favor of keeping Newsom, but almost a quarter plan to vote to recall the Governor (23% recall/73% keep).

Help the MRC call out bias in the Spanish-speaking news. Take action here.