When it comes to coverage of the serious allegations levied against then-Senator Joe Biden by former staffer Tara Reade, the nation’s Spanish-language national news media have been conspicuously absent. MRC Latino’s most recent study shows that, predictably, this wasn’t always the case.

MRC Latino has completed a study that compares the time accorded to the allegations of sexual abuse levied against then-Judge Brett Kavanaugh during his confirmation as Associate Justice of the United States Supreme Court to the time accorded to Reade’s allegations against Biden, and across four Spanish-language networks: Univision, Telemundo, CNN En Español (CNNEE), and Estrella TV. The results are staggering. 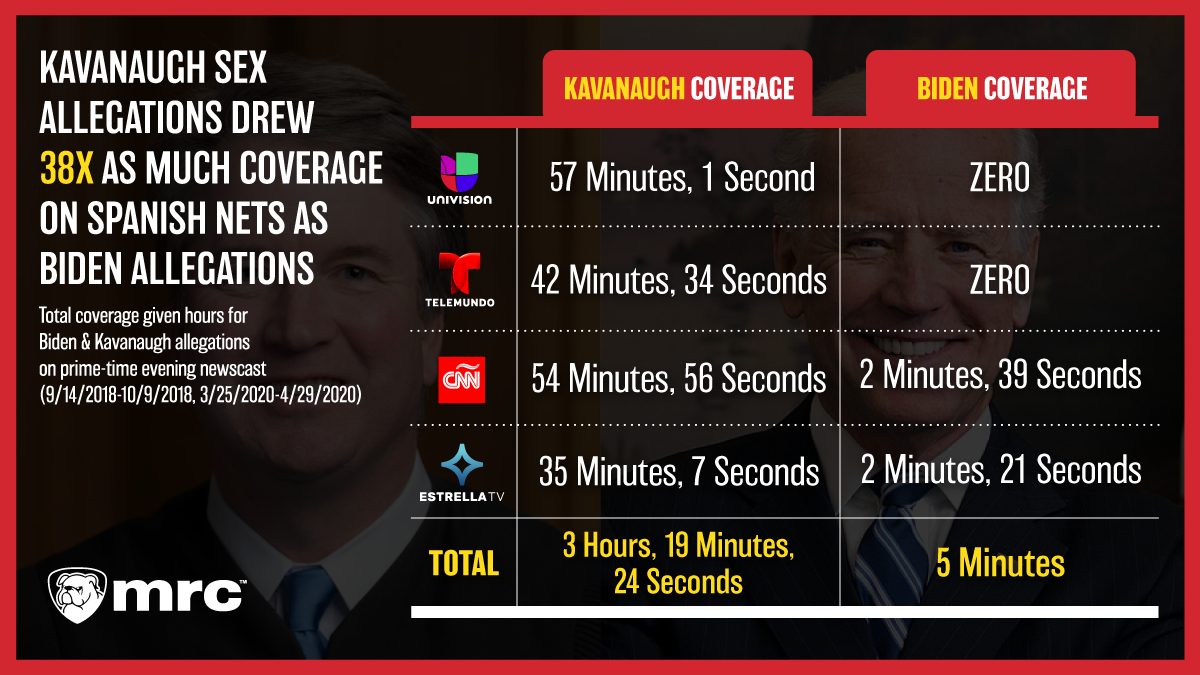 Coverage related to allegations against Kavanaugh across the four networks began immediately after the allegations were made public (with Univision and CNNEE leading the way on September 14th, 2018), and extended three days past Kavanaugh’s confirmation to the Supreme Court on October 6th, 2018. The total coverage -3 hours, 19 minutes, and 24 seconds- accrued over a period of 26 days.

None of the networks broke their collective blackout to cover the corroborative evidence that aired on CNN's Larry King Live in 1993, which was uncovered here at the Media Research Center.

Given that Biden has now begun to address these allegations, it is likely that these networks will follow suit and primarily cover Biden's response as opposed to the allegations themselves which, as we indicated earlier, was not the case in 2018 when the target of the allegations was a Supreme Court nominee appointed by a Republican president.

Today's study further confirms the findings of MRC Latino's five-year study, which documented and quantified the leftward drift of the nation's Spanish-language news media. Today's study also quantifies that there are two distinct scandals at play: there are the very serious allegations of sexual abuse against Joe Biden, and there is the Spanish-language media's shameful and willful blackout of these allegations in their prime-time newscasts- which further erode these networks' credibility in the eyes of the public they claim to champion.

[Methodology note: This study looked at the prime-time evening newscasts on Univision, Telemundo and Estrella TV, as well as "Directo USA" on CNN En Español. Many thanks to MRC Latino intern Asun Weninger for her contributions to this study.]