Jeb Bush, a convert to the faith, is a bad Catholic who all but denies the dogma of papal infallibility. That's an argument put forward by that eminent Catholic scholar... Jonathan Alter?! Yup, Alter made that argument on the June 19 edition of Now with Alex Wagner as he reacted to the former Florida governor's dismissal of Pope Francis's views on climate change as promulgated in his latest encyclical.

Of course, Catholic doctrine holds that the pope is only infallible when he pronounces ex cathedra on matters of faith and morals, whereas the pope's views on "prudential matters," such as, well, any number of social and political issues, or matters of governmental policy, are NOT binding on the consciences of the faithful.

What's more, of course, ex cathedra pronouncements are incredibly rare. But why let accuracy and precision of language get in the way of a boilerplate left-wing talking point? 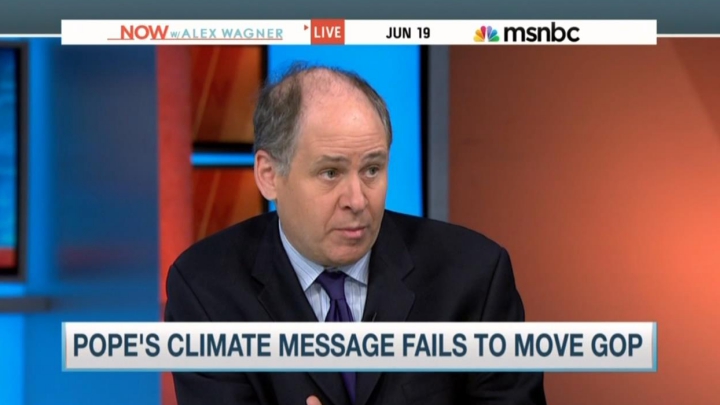 ALEX WAGNER, host: I want to go to another topic that is proving fraught in this particular moment. Pope Francis's encyclical on climate change is causing headaches for Republican presidential candidates. Jeb Bush told New Hampshire voters this week, "I don't get economic policy from my bishops or my cardinals or my pope." OK, so here's -- but, OK, but he does get some other policy from his cardinals and bishops including social and cultural policy. Reproductive policy.

JONATHAN ALTER, Daily Beast columnist: And, as a relatively new, you know, Catholic convert, they do believe in a form of papal infallibility. So what he's doing here is actually against the tenets of his new faith.

And, by the way, this was not an economic message that the pope delivered, it was a moral message. And so what he's basically saying is that he is rejecting is the moral message of the pope. This was about our planet, our Earth, and our moral obligation to the Earth. It doesn't get any more moral than that.

A few things for the sake of accuracy: Jeb Bush was received into the Catholic Church at Easter of 1995, 20 years ago. So he's hardly a "relatively new convert." Secondly, conservative Catholic politicians are not so much following Church "policy" as being guided in matters of legislation by Church teaching on the sanctity of life, promoting policies meant to safeguard innocent life that work within the political and judicial constraints of a country where Roe v. Wade is law of the land.

Thirdly and finally, the papal encyclical in question, Laudato Si, does NOT attempt to define dogma, although it does touch on the moral implications of many environmental policies. Even so, it is NOT the pope saying that Catholics are duty-bound to pursue one particular course of action to thwart climate change over another. Additionally, there are plenty of elements of Laudato Si which the liberal media are NOT telling you about, like affirming Church teaching on the unborn, eviscerating the push for population control, etc. For that, you might want to take a look at this excellent piece at Stream.org, headlined, "11 Things You Probably Won’t Hear about Pope Francis’ Encyclical" (h/t Ryan Ellis of Americans for Tax Reform).