On February 5, former New York City Mayor Michael Bloomberg told nearly 400 people at an event in Aspen, Colorado that in order to save lives, police should actively take guns away from all male minorities between the ages of 15 and 25.

The full audio was released on February 17, but the “big three” (ABC, CBS, and NBC) networks, who repeatedly promote Bloomberg’s anti-gun activism, have yet to report on his controversial anti-gun comments.

From the Daily Caller audio of Bloomberg's comments :

It’s controversial, but first thing is all of your — 95 percent of your murders, and murderers, and murder victims fit one [unintelligible]. You can just take the description, Xerox it, and pass it out to all of the cops. They are male, minorities, 15 to 25. That’s true in New York, it’s true in virtually every city in America. You’ve got to get the guns out of the hands of the people getting killed. First thing you can do to help that group is to keep them alive.

Would the “big three” have remained silent if a member of the NRA or a pro-gun politician had said that all minorities aged 15-25 should be banned from obtaining a firearm, or would they claim that such remarks were discriminatory and racist? 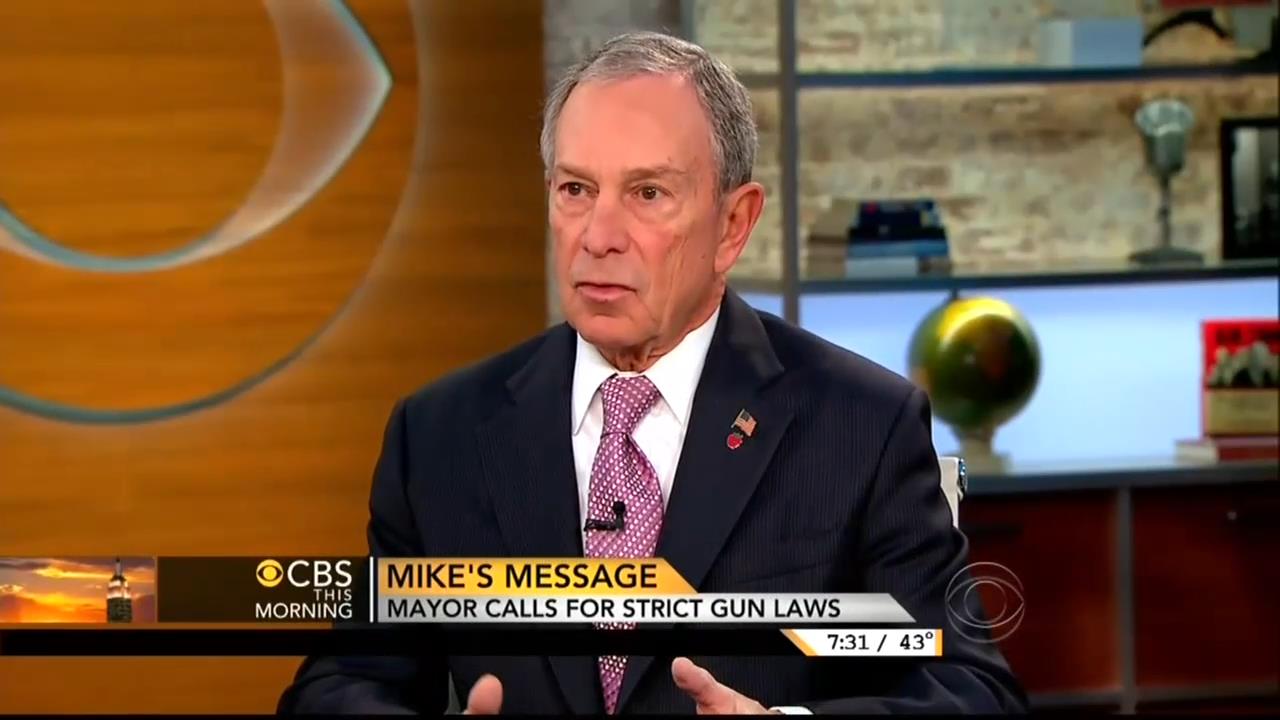 The networks’ decision to ignore Bloomberg’s divisive comments is in stark contrast to the numerous promotional segments they have given his anti-gun activities over the years.

On April 16, 2014, NBC’s Today was thrilled to learn that Bloomberg was using his fortune to push gun control, even though the network had complained in the past about excessive money in politics. Co-host Savannah Guthrie spoke to Bloomberg and touted how “[y]ou're putting $50 million into the effort....saying essentially this new group is going to borrow a page from the NRA's playbook. The NRA has been very successful in frightening lawmakers who oppose them....You're quoted in The New York Times this morning saying, 'We have to make them afraid of us.'"

On August 20, 2014, CBS This Morning rushed to defend Bloomberg from the NRA after the group ran ads criticizing his anti-gun stance. CBS reporter Ben Tracy insisted that the NRA was “getting personal" by going after the former New York City mayor.

In fact, CBS has a long history of giving the former New York City mayor a platform to push his anti-gun crusade. On four other separate occasions, May 3, 2010, March 29, 2012, July 23, 2012, and January 17, 2013, CBS gave Bloomberg an unchallenged platform to spout his controversial views on guns, but so far the "big three" have remained silent on his suggestion that police should seize guns from minorities.