Talk about a conflict of interest. Meet the Press moderator Chuck Todd sat down with former Senator Jim Webb (D-V.A.) for an interview Sunday morning and set up the discussion by declaring how his wife worked on the Democrat’s 2006 Senate campaign.

The NBC News Political Director introduced the Virginia Democrat by highlighting how Webb is “a successful author and screenwriter and has written eight books over the years. And I do want to mention that my wife helped Jim Webb in his 2006 Senate campaign.”

While Todd should be commended for revealing his wife’s work helping to elect Senator Webb, one wonders if the NBC host should even be interviewing someone with close ties to his family. Furthermore, Todd got his start in politics working for Senator Tom Harkin’s (D-IA) 1992 presidential campaign so his support for Democratic politicians is nothing new for the Meet the Press moderator.

NBC News seems to have a conflict of interest problem as it routinely allows Morning Joe co-host Mika Brzezinski to interview her father, Zbigniew Brzezinski, who served as Jimmy Carter's National Security advisor.

After discussing several foreign policy issues with Webb, Todd put his former MSNBC hat back on and proceeded to ask his guest numerous lefty questions that could have come right out of the “Lean Forward” network’s playbook.

The NBC host hyped the Virginia Democrat’s potential 2016 presidential aspirations and suggested that he may be the liberal alternative to Hillary Clinton who some Democrats don’t view as liberal enough:

Let me move to your potential political ambitions. Is there anybody else thinking about running for president, that if they got in, you'd say, you know what? They're going to touch on these issues better than I am… You're inevitably going to be compared to Hillary Clinton here. What's the contrast that you think's fairest between you and Hillary Clinton?... : If people describe you as running to her left, what do you say?

Todd then hit his liberal guest from the left over gay marriage and pressed him over not fully supporting gay marriage for the entire country:

Very quickly, a few key issues. Gay marriage. You were for civil unions, but not for legalized gay marriage when you ran in 2006. Have you changed?... So you're not ready, so legal in some places, but not legal in others?

Despite Chuck Todd admitting to having a conflict of interest, the Meet the Press host’s decision to interview the Virginia Democrat is unfortunate given NBC’s attempts to revamp the liberal Sunday news show. 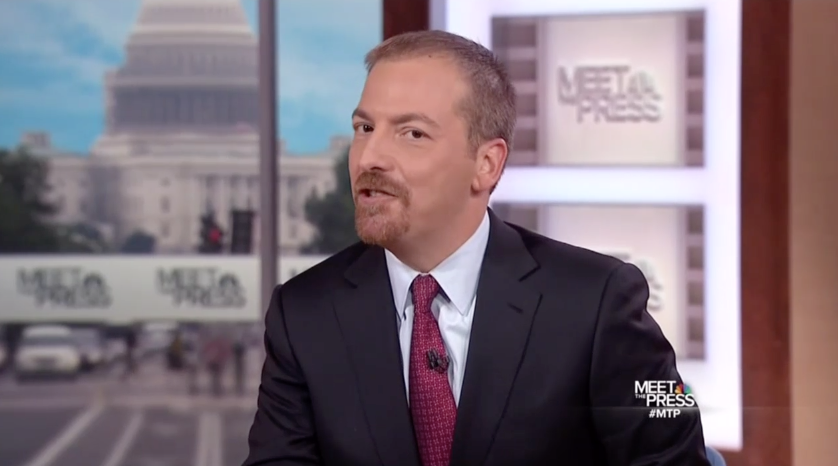 CHUCK TODD: And welcome back, now to our Meet the Candidate series, sort of, this week I'm joined by Jim Webb, who points out he's just a potential candidate for president in 2016. He certainly has a unique resume. Webb is a former Marine and served in Vietnam where he won a Navy Cross for extraordinary heroism as well as the Silver Star, two Bronze Stars, and two Purple Hearts.

In the '80s, he served in the Reagan administration, as an Assistant Secretary of Defense and Secretary of the Navy. In 2006, he switched parties and was elected as a Democratic senator from Virginia and served just one term before opting not to seek reelection. He's also a successful author and screenwriter and has written eight books over the years. And I do want to mention that my wife helped Jim Webb in his 2006 Senate campaign. Senator Webb, welcome back to Meet the Press.

JIM WEBB: Good to be with you.

TODD: I want to actually begin with any reaction you have to Clay Hanna, because how politicians use phrases like "boots on the ground," and politicize the issues of combat troops, that does have an impact on soldiers, doesn't it?

WEBB: Well, it doesn't. And actually, just having watched the beginning of your show, I think it's fair to say right now that we are at a crossroads as a nation in terms of how we view ourselves, how we say these things to ourselves. And the way that these issues are going to be resolved in the next couple of years will affect us for a very long time. And this is true in domestic policy as well. When you see the arguments here about economic fairness, the truth is that it really depends on where you're sitting in this country. We've got a stock market that has almost tripled since March of 2009.

WEBB: Yeah, exactly. If you've got capital, you're feeling pretty good. But average salaries have gone down, loans to small businesses have actually decreased. And we have a criminal justice system that's embarrassing. And all of the country should be focusing on that too. And in foreign policy, what you're hearing from this former soldier is something that we're seeing a lot of countrywide. And that is that we have not had a clear articulation of what American foreign policy is, basically since the end of the Cold War. So when you're looking at places like Iraq and Syria, you're seeing policies that can't be clearly articulated.

TODD: You're basically saying that the president--

WEBB: I'm saying that in terms of a clear doctrine, we have been lacking that for a very long time. And it particularly impacts the Middle East. If you look at what's going on right now, there are two data points I think that are critical. The first was the decision by the Bush administration to invade and occupy Iraq. Which empowered Iran and unleashed all the sectarian violence. And then it was what I thought was a strategic, the inadvisable strategy of the Arab Spring. And what has happened in Libya as well as Syria as a result.

WEBB: I think what you were seeing in Egypt and I was talking about it when it began was the first rule of wing walking is make sure you've got a clear grasp on where you're going before you leave where you are. This was accentuated in Libya. I spoke very strongly against the notion that a president could unilaterally conduct military operations in an area where we had no treaties at work, we had no Americans under attack or at risk.

And you take a look at the end result of Libya, are an enormous number of weapons that are unaccountable, which are probably in Syria, and can you get to the Tripoli airport today? And who's talking about that? Now if you take a look at Syria, which is Syria and these other parts of Iraq, which is what the former soldier was talking about, we now have a situation where we're asking these freedom fighters, or whatever you want to call them, who were going after Assad, to help us go after ISIS.

TODD: And it's not clear to you that they're going to do that. Is it?

WEBB: And the elements that are fighting there are very fluid in terms of the people who declare their alliances. I would be willing to bet that we had people at the top of ISIS who actually have been trained by Americans at some point.

TODD: Let me move to your potential political ambitions. Is there anybody else thinking about running for president, that if they got in, you'd say, "You know what? They're going to touch on these issues better than I am."

WEBB: You know, I'm really not looking at that. What I'm trying to do is exactly the same thing that I did when I was thinking about running for the Senate. And that is to identify the issues that America needs to focus on and in order to regain the trust of the American people. And if you look at these polls that you were showing, I think the people are way ahead of their leaders. And they know we have these problems, that we're at a crossroads. And they're very disappointed in the fact that the top leaders in both parties have not been able to come together for the good of the country to work to solve them.

WEBB: I'll leave that to other people to answer.

TODD: If people describe you as running to her left, what do you say?

WEBB: I believe in certain principles that I put out. And whether they are to the left or to the right doesn't matter to me. I don't change what I believe. This is what I did when I ran for the Senate. And I'm very concerned about issues of economic fairness, social justice. We worked on criminal justice reform. Eight years ago we put two and a half years of hearings in it in the Senate. I don't know whether that's to the left or to the right. It's a leadership issue. It's not a political issue.

TODD: Is she a qualified president?

TODD: Do you think she's a qualified candidate to be president?

WEBB: We led on this to Asia, which people talked about a lot for the Obama administration. We began that two years before President Obama was elected. And I've been very strong on different ways to deal with foreign policy.

TODD: You're smiling here. You don't want to talk about Hillary Clinton yet. Is that fair to say? You're not ready to talk about her?

WEBB: I don't think it's for me to talk about Hillary Clinton. I enjoyed working with her when I was in the Senate. I don't know what she's going to do, if she runs, what she will run on. I'm just very concerned about these issues for the country.

TODD: Very quickly, a few key issues. Gay marriage. You were for civil unions, but not for legalized gay marriage when you ran in 2006. Have you changed?

TODD: So you're not ready, so legal in some places, but not legal in others?

WEBB: I think this has been a good thing for the country.

CHUCK TODD: Okay. Well, Jim Webb, I'm going to leave it there. Former Democrat Senator from Virginia, we'll be watching. Are you going to announce before the end of the year?

JIM: Taking it one day at a time.