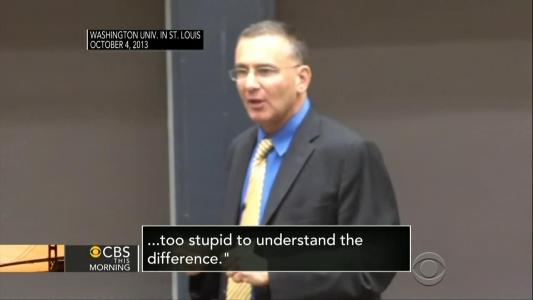 Just imagine the reaction of the liberal media if a video had surfaced of a George W. Bush administration official admitting that “lack of transparency” was “a huge political advantage” in selling the Iraq war and that they relied on the “stupidity of the American voter” to launch an attack on Iraq? That video would be everywhere.

However, the clip of ObamaCare architect Jonathan Gruber using those exact phrases in talking about the passage of the Affordable Care Act has yet to be reported on ABC or NBC’s evening or morning shows. The sum total of Big Three (ABC, CBS, NBC) network coverage was a 2 minute, 50 second segment on Thursday’s CBS This Morning - six days after the tape was first discovered. On the print side the Washington Post offered a front page story on Gruber on Thursday. But the Gruber comment has yet to show up in the pages of The New York Times, USA Today, the Los Angeles Times or even the Associated Press. 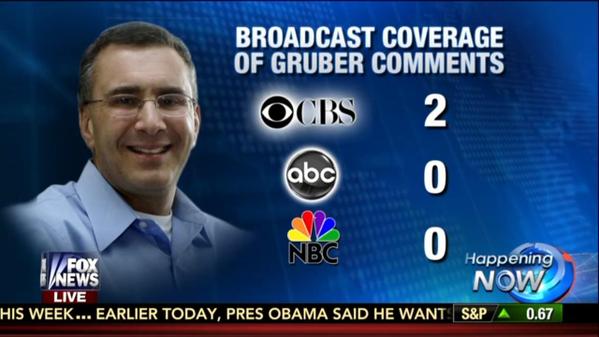 Public broadcasting has been a no-show as well, with no Gruber mentions on PBS or NPR.

The media have been too busy bemoaning new Republican attempts to repeal ObamaCare. On the November 6 Today show, NBC’s Chris Jansing whined: “Well, what looked to be at least a temporary truce between President Obama and Congress lasted less than 24 hours. Republican leaders now say the focus of the new Congress will be to repeal the President’s signature accomplishment, ObamaCare.” On the November 6 Nightly News Brian Williams complained: “Digging in, how’s that cooperation going that everybody promised after the election results? Tonight, we have a reality check.” He then threw it to Jansing who reported “Republican leaders doubled down on getting rid of the President’s signature accomplishment, making a commitment to repeal ObamaCare.”

Since AmericanCommitment uploaded the video on November 7, the clip has gone viral thanks to major news outlets like the Drudge Report and Fox News picking up on it. FNC’s Megyn Kelly, on Tuesday night announced: “Breaking tonight, a scandal over what looks like an intentional effort to mislead voters explodes, with new video of a key White House advisor underscoring just how stupid he thinks Americans are...In the last 24 hours, a scandal involving a key White House advisor has blown up. And now we are waiting for some sort of on the record explanation from the administration. It started when video surfaced yesterday of MIT economist Jonathan Gruber, one of the key architects of ObamaCare. Speaking at a healthcare forum last year, describing on camera the effort to hoodwink what he called ‘stupid American voters.’”

Kelly noted that while Gruber ducked an invitation to appear on The Kelly File, he did show up on MSNBC’s Ronan Farrow to defend himself:

KELLY: And today, Mr. Gruber, who declined our invitation to explain his remarks here on The Kelly File, went on a little watched daytime broadcast on MSNBC to say his remarks were “spontaneous” and, “careless?”

GRUBER (earlier today on MSNBC): The comments in the video were made at an academic conference. I was speaking, speaking off-the-cuff, and I basically spoke inappropriately, and uh, I regret having made those comments.

KELLY: It was off the cuff. He didn’t mean it. But now tonight, more video has surfaced, showing that this was not the first time Mr. Gruber called the American people “stupid” in an off-the-cuff remark. In this next clip, from, also last year, Mr. Gruber explains how Democrats played with the language of the Obama care law, so that it achieved their goals by, again, fooling the stupid public.

Even the liberal Mika Brzezinski, on Wednesday’s edition of MSNBC’s Morning Joe, was astounded by the double-standard: “This ObamaCare story, which I saw yesterday and I’m surprised it didn’t emerge...Nobody covered it except for some right-wing outlets. Had this been a Republican, what do you think would have happened?...That was a huge gaffe, right? We can all agree on that. I do think had it been a Republican, the media would be exploding.”

(Update: The New York Times ran a blog on Gruber in their November 12 online edition)