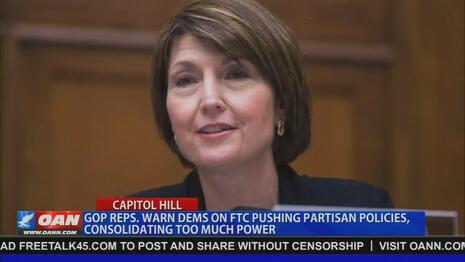 House Republicans launched an effort to rein in Big Tech’s growing tyranny with an onslaught of new bills in a massive push to fight back against online censorship.

Republicans in the House Energy and Commerce Committee unveiled a package of 32 bills to hold Big Tech accountable by reforming Section 230 of the Communications Decency Act, protecting children and improving transparency, among other goals. “Big Tech has broken our trust that they can be good and responsible stewards of their platforms,” said Ranking Member Cathy McMorris Rodgers (R-WA).

McMorris Rodgers did note that “the goal is for these drafts is to lead to concrete legislation and reforms. The Committee is asking for stakeholder and public engagement on these draft bills as part of their thoughtful process in their Big Tech Accountability platform to drive meaningful change.”

Twelve of the bills aimed to reform Section 230. The proposed reforms were directed at “Preserving Constitutionally Protected Speech,” and removing liability protections in cases involving child exploitation, doxxing and terrorism.

Other bills aimed to protect the mental health of children online and provide additional accountability for Big Tech companies. The “Mental Health Impact Disclosure” bill, for example, would “require companies to disclose the mental health impact [of] their products and services [] on children.”

Republicans in the Energy and Commerce Committee understand the dangers that Big Tech censorship poses for Americans. “Guided by our Big Tech Accountability Platform, we are releasing discussion draft bills for Big Tech to be transparent, uphold American values for free speech, and stop their abuse of power that is harming our children,” said McMorris Rodgers in a press release. “Our goal is for these drafts to lead to concrete legislation. Every Republican member of the Energy and Commerce Committee is leading on solutions, and I’m grateful for their hard work to drive meaningful and needed change.”