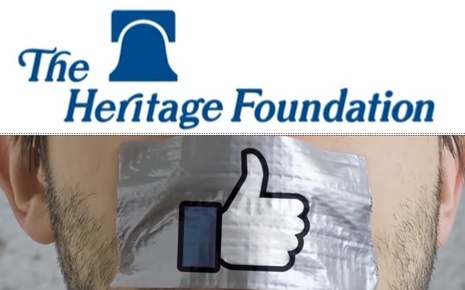 Heritage Foundation President Kevin Roberts didn’t mince words about his organization’s commitment against Big Tech efforts to silence conservatives: “Big Tech is the enemy of the people,” he said in a statement on the report's release.

The list of nearly two dozen proposals, outlined by Heritage Research Fellow in Technology Policy Kara Frederick, included everything from federal to state action, to internal reforms by the Big Tech companies themselves.

At the federal level, Heritage proposed removing Section 230 liability protections if the companies censor content based on views guarded by the U.S. Constitution and holding Big Tech companies accountable for ties to communist China. Frederick also specifically called for independent investigations into “state and local policies that provide special treatment to Big Tech firms” at the state level.

Frederick railed against Big Tech for exercising “pervasive control of information and access to the digital space in ways that undermine freedom and a functioning republic.” Heritage, founded in 1973, greatly influenced late President Ronald Reagan on policies including taxes, regulation, trade and national defense. Heritage’s declared involvement in the Big Tech free speech war is a seismic occurrence of epic proportions.

In a follow-up statement headlined “Heritage Calls for Sweeping Reforms to Hold Big Tech Accountable,” Heritage said its proposed reforms “counter the grave threat Big Tech poses to Americans’ basic rights and the health of our republic.” Roberts proceeded to throw down the gauntlet against companies like Facebook, YouTube, Twitter and Amazon:

These powerful corporations’ undeniable service to leftist ideology eerily mirrors oppressive behavior by totalitarian governments to silence opposition and relegate those with whom they disagree to second-class citizens. Every single American should be concerned by Big Tech’s manipulation of the free market to exploit consumers, censor conservatives, target children, expand chilling surveillance programs, and selectively limit access to the modern public square. It’s going to take all of us to fight back against Big Tech and ensure these companies are held to account for their unchecked, flagrant abuses of power and undermining of the common good.

Frederick slammed the growing “symbiosis” between Big Tech and Big Government. “The Biden Administration is attempting to circumvent the Constitution by pressuring private tech companies to take down content under a broad and politically biased definition of misinformation,” the report stated. “When Big Tech companies do the government’s bidding by removing users and content that the government tells them are objectionable, they are essentially acting as government agents—a potential violation of the First Amendment.”

The proposals Heritage is endorsing are fundamental, and include nuking Section 230 of the Communications Decency Act, which allows social media platforms to avoid legal liability: