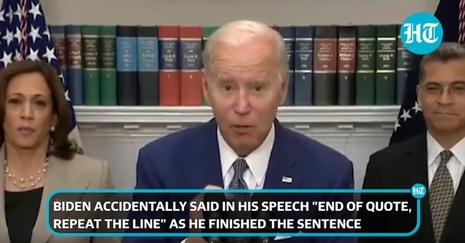 President Joe Biden's clumsy flub lit up the internet last week after he read the teleprompter's private instructions to “repeat the line” during a White House speech on pro-abortion tactics.

But one Facebook-supported “fact-checker,” FactCheck.org, tried to tell a different story.

Biden clearly said “repeat the line” with nothing before it.

But the White House, released a transcript of Biden’s July 8 speech adding the words, “Let me” before “repeat the line,” apparently to cast the president in a more positive light.

Days after the White House’s damage control, FactCheck.org released a July 14 blog in its “Debunking Viral Claims” section. The blog alleged that users were “falsely” claiming that Biden misspoke to insinuate he is “becoming senile.”

FactCheck.org’s evidence that conservatives were pouncing in bad faith was none other than the embellished transcript.

Do you see how this works? Biden makes a gaffe, the White House deflects using a bogus transcript, and when someone calls out the White House, the fact-checkers point to that transcript as “fact.”

Then the White House can tout the so-called “fact-check” as proof, as White House Assistant Press Secretary Emilie Simons did in this tweet.

About a week after Biden’s July 8 gaffe, the White House released another transcript – since revised – to apparently make it seem like Biden said something he didn’t. This time it was his supposed conversation with the leader of Saudi Arabia about the killing of a journalist, which Washington Examiner reporter Jerry Dunleavy highlighted.

Maybe instead of fact-checking memes and random Facebook posts, these wannabe Truth Police should focus their attention on the Biden administration’s myriad exaggerations.