Tim Pool Tells Dan Bongino NewsGuard is a ‘Joke,’ ‘Not a Legitimate Agency’

Fox News “Unfiltered” host Dan Bongino asked podcast host Tim Pool about his website’s recent clash with NewsGuard. “I think it’s a joke,” Pool said. “They gave us a good rating, but it is not a legitimate agency.” 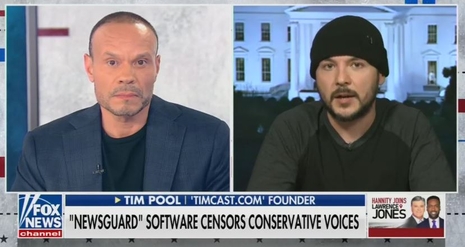 NewsGuard is a browser extension that rates news supposedly on the basis of “credibility and transparency,” but Pool said he caught the website breaking its own criteria and basic journalistic ethics.

Pool said that NewsGuard misquoted him in its nutrition label for his website Timcast.com. “They inserted words into my quote on their rating to change the context of what I said,” Pool told Bongino. “It took me three tries of saying, ‘You have to remove those words.’ And they finally said ‘oh, oh, fine we’ll remove them.’”

Timcast.com fell short in the “Gathers and presents information responsibly” section of NewsGuard’s credibility nutrition label, which scored Timcast an 82 out of 100.

“They gave us one strike for irresponsibility,” Pool told Bongino. “They first emailed me questioning why I reported on the Hunter Biden laptop emails and my response was, ’Your agency certified two outlets that claimed the emails are verified. And they immediately said ‘oh, oh, whoops, whoopsy.’”

NewsGuard complained of multiple issues in several different Timcast.com articles when it rated the site. Pool said in one case, NewsGuard penalized Timcast for accurately reporting something that former President Donald Trump said. “They came and claimed that because we quoted Donald Trump in a factual news article on our website, Timcast.com, that it was irresponsible because Donald Trump is a liar and they said his quotes are provably false.”

Pool told Bongino that he responded by saying, “We are not fact-checking what he said. We’re reporting he responded with a statement.” Pool also said he told NewsGuard he and his colleagues would “implement a new policy moving forward on all quotes to fact-check them all so we’re not being irresponsible.”

Pool noted his website has a “very good rating from NewsGuard” despite Timcast’s slightly tarnished score. He also tweeted that NewsGuard lowered Timcast’s score based on five articles which is concerning because wildly biased and openly inaccurate news sites–like BuzzFeedNews, USA Today, and The Nation–have perfect or near-perfect scores.

“NewsGuard says we are not responsible because out of 3,892 articles around 5 either were too similar to other outlets reporting or did not provide fact checks on quotes,” Pool tweeted. “They refuse to say USA Today, which admitted to fabricating 23 stories, is irresponsible.”