Big Tech companies have shown that science is only relevant when it’s not confirming biological facts about sex and gender, and they don’t hesitate to censor anybody who wields science against them. 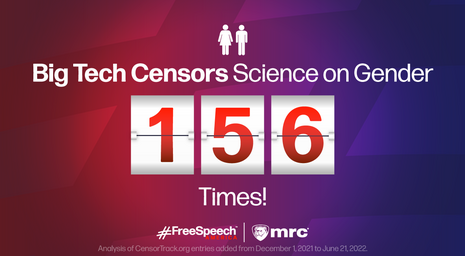 MRC Free Speech America found and recorded 156 examples of Big Tech censoring users who oppose the transgender narrative over the last 6 1/2 months in its unique CensorTrack database. That’s an average of about five cases of censorship attacking biological truth per week — more than double the weekly average that MRC found when it previously reviewed CensorTrack entries involving gender from January through November 2021.

Big Tech is clearly flexing its woke muscles. Over the last six months, transgender content exploded and the left began targeting children and young people. Those attempting to expose the lies and filth that the transgender movement pushes on young people have been silenced, restricted, deleted and locked out of their social media accounts.

Big Tech censors left no stone unturned. Facebook and Twitter went after Sen. Marsha Blackburn (R-TN), The Babylon Bee, Fox News host Tucker Carlson, and Turning Point USA founder Charlie Kirk for saying or endorsing that only women belong in women’s sports and women of the year lists. Platforms even silenced Libs of TikTok, Blaze TV podcaster Allie Beth Stuckey, and Daily Wire commentator Matt Walsh when they expressed concerns and pushed back against the transgender lobby. “They say it’s innocent,”  Libs of TikTok tweeted. “They say it’s just about inclusion and acceptance. They say no one is trying to confuse, corrupt, or sexualize kids. They lie.”

When it came to enforcing Big Tech’s gendered speech controls, Congressional members trying to communicate with constituents were no exception. The Big Tech censorship oligarchs targeted them too for defending girls' sports as a biological women-only activity.

Rep. Vicky Hartzler (R-MO) similarly tweeted in February that “Women’s Sports are for Women, not men pretending to be women,” according to a screenshot tweeted by her campaign manager Michael Haufner.  A Twitter spokesperson told MRC Free Speech America that Hartzler’s tweet violated the platform’s “hateful conduct” rules. The platform locked her account and required Hartzler to delete the tweet to regain access to her account.

Women of the year should be role models for young girls, and at the very least, they should be well … women. MRC’s CensorTrack database exposed that Big Tech can’t even take a joke about gender. 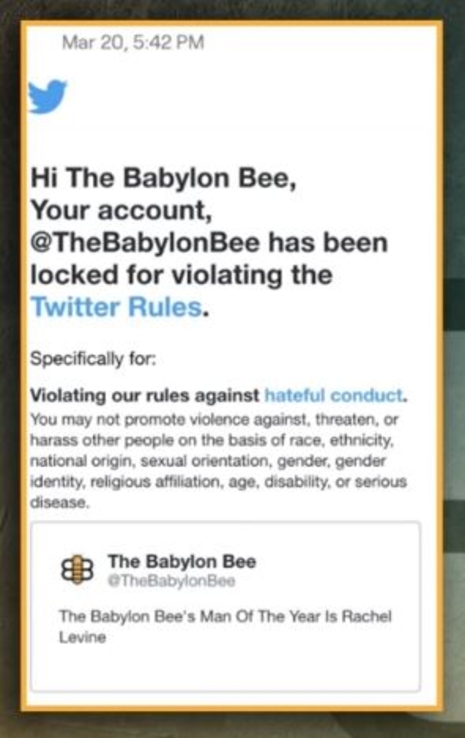 USA Today's 2022 "Women of the Year" list released in March spurred a mass censorship campaign on Twitter. The list featured no shortage of leftist women and none other than “transgender” U.S. Assistant Secretary of Health, Rachel Levine.

The Babylon Bee responded to the article with a satire piece giving Levine the title “man of the year.” Twitter locked the satire site’s account for violating its rules on hateful conduct. The Babylon Bee is a member of the Free Speech Alliance.

Screenshots indicate that the platform placed a warning over Texas Attorney General Ken Paxton’s Declaration that “Rachel Levine is a man” in response to the list. Turning Point USA founder and Free Speech America Advisory Board member Charlie Kirk apparently wasn’t so lucky. “‘Richard Levine,’ Kirk tweeted according to The Post Millenial, ‘spent 54 years of his life as a man. He had a wife and family. He “transitioned” to being a woman in 2011, Joe Biden appointed Levine to be a 4-Star Admiral, and now USA Today has named “Rachel” Levine as a “Woman of the Year”[.] Where are the feminists??’" Twitter reportedly removed Kirk’s tweet and locked his account for so-called “hateful conduct.”

The transgender movement has no shame in attempting to indoctrinate children for its cause, and Big Tech has no qualms aiding and abetting. One notorious case involved a popular Twitter account that exposed drag queen events for kids that were advertised as if they were a Wiggles concerts. Libs of TikTok tweeted a “MEGA DRAG THREAD” exposing the proverbial sewage leftists have been trying to feed American youths this June.

The thread featured pictures, videos and information highlighting events like drag queen story time at a Sudbury, Mass. preschool, a Dallas gay bar’s “Drag the Kids to Pride” event, Jasper, Ind.’s Pride in the Park event, which later canceled its “all ages” drag show, and many more similar school and library events.

Twitter removed the thread and locked the user’s account for allegedly “violating our rules against abuse and harassment,” according to a screenshot tweeted by The Babylon Bee CEO Seth Dillion.

The platform also locked BlazeTV commentator Allie Beth Stuckey’s account when she slammed Fox News for airing a segment featuring a 14-year-old who “transitioned” at age 5. “I’m stunned that Fox News ran a segment celebrating a girl whose parents ‘transitioned’ her into a boy when she was 5 because she apparently told them she was a boy ‘before [she] could talk.’ Absolutely maddening &... heartbreaking,” Stuckey tweeted, according to screenshots posted by Stuckey. The screenshots indicate that Twitter removed her tweet for so-called “hateful conduct” but later restored her account.

In December, the triggered censors at Twitter locked American Principles Project (APP) Policy and Government Affairs Director Jon Schweppe’s account after he encouraged governors to “be emboldened to continue the fight against the evil gender ideology being forced on America’s children,” according to APP’s screenshots. He urged them to join Arkansas and Tennessee “in banning the chemical castration and surgical mutilation of minors suffering from gender dysphoria.” Twitter locked Schweppe’s account for 12 hours and required him to delete his tweet to regain access to his account, according to the screenshots. APP is a member of the Free Speech Alliance.

But Twitter is not the only Big Tech giant trying to control the gender narrative to avoid offending the woke rage mob. 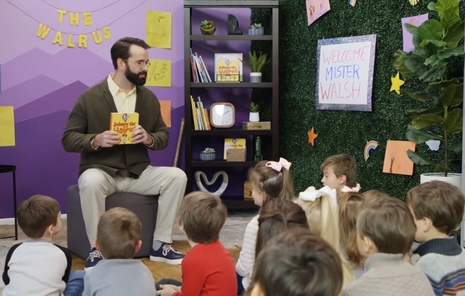 Amazon attacked Daily Wire host Matt Walsh’s children’s book “Johnny the Walrus” by going after its advertising. The fictional storybook mirrors a child’s gender “transition.” The book portrays the relationship between Johnny, who thinks he is a walrus and his mom who begins treating him as if he is a walrus. The book initially sold out on Amazon in December, but the platform restricted ads when it restocked the book in April. Walsh said that the online store also “removed it from the children's category and labeled it political commentary.”

Chinese Communist Party-affiliated TikTok removed a Young America's Foundation (YAF) video featuring Ethics and Public Policy Center President Ryan T. Anderson calling sex a “binary.” "There's not a spectrum between XX and XY, a spectrum between sperm and egg, nor is there a third gamete,” Anderson told students according to a YouTube version of the clip. “It's not like there's sperm, egg and the third gamete, nor is there a third genital. So this is neither a spectrum nor is it two of infinite possibilities. So sex is a bodily reality." TikTok removed the January video for alleged "hate speech," denied YAF's appeal and suspended the account for 7 days, according to screenshots the organization tweeted. YAF is a member of the Free Speech Alliance.