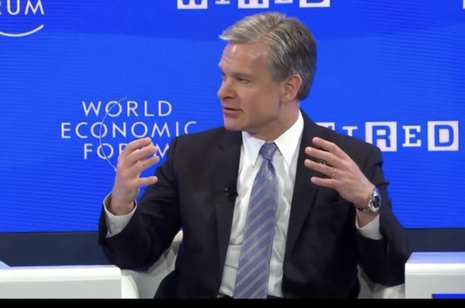 Federal Bureau of Intelligence (FBI) director Christopher Wray has no guilt about the pressure his agency put on Big Tech to censor Americans’ free speech, as revealed in the Twitter Files.

Speaking during a panel at the World Economic Forum’s (WEF) Davos 2023 conference Thursday called “In the Name of National Security,” Wray urged ever more tech-government collusion.

“Especially the FBI has I think made significant strides. We are focused on looking at cyber attacks.” He continued to explain how the FBI plans to get ahead of cyber risks, saying, “the name of the game” is to get “farther left of boom.” The phrase “left of boom” is used to mean “proactive” cybersecurity, according to Cisco Blogs.

“The first thing a tyrant does in trying to control people is try to censor their speech,” stated VP of MRC Free Speech America & MRC Business Dan Schneider. “The second thing they do is punish people for getting out of line. The Biden administration and the FBI are doing both.”

Two December drops of the ongoing Twitter Files revealed that the FBI and other government agencies pushed Twitter to censor. The first drop explained how the FBI tried to circumvent legal processes to get Twitter to share private user data. Then, “The files show the FBI acting as the doorman to a vast program of social media surveillance and censorship, encompassing agencies across the federal government - from the State Department to the Pentagon to the CIA,” independent journalist Matt Taibbi wrote in the second drop.

Wray condemned “increased effort by the Russian intelligence services” and Chinese artificial intelligence (AI) and hackers, but the U.S. intelligence community head seemed not at all concerned about the FBI’s secretive activity targeting Americans’ online speech. Wray claimed the FBI had conducted a “significant technical operation” against a GRU Botnet early on in the Ukraine conflict, “because we didn’t want to wait around to find out what they were up to.”

Wray’s fellow WEF panelist and Gecko Robotics CEO Jake Loosarian, who spoke about robotics and conflict, agreed with Wray. “This is our moment," he said, according to The Post Millennial. "And I think it's also a moment for Silicon Valley tech companies to understand the importance of national security and working with governments to help protect western ideals.” Isn’t free speech a Western ideal?

Perhaps someone should tell Loosarian and Wray.