Senate Majority Leader Chuck Schumer decides what bills come up for a Senate vote. But with Schumer’s daughters employed by Facebook and Amazon, antitrust legislation may go the way of President Joe Biden’s popularity: down into oblivion. 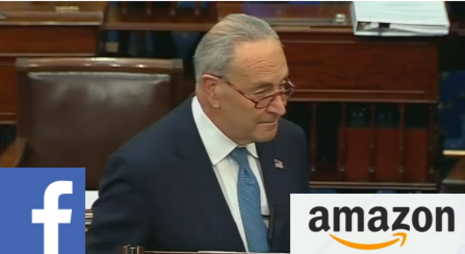 As majority leader of the U.S. Senate, Schumer (D-NY) controls the vote timing and selection of legislation that moves through the chamber, according to the New York Post.

The Senate Judiciary Committee is reviewing Big Tech legislation that would prevent platforms from favoring their own products over competitors’, and that legislation may come up for a vote soon. Schumer reportedly has not said where he stands on the legislation. Might that stem from the fact that his two daughters work for Big Tech companies?

Jessica Schumer is a registered lobbyist for e-commerce giant Amazon, per New York state records. Alison Schumer works for Facebook as a product marketing manager, the New York Post wrote. The two sisters’ employment, it would seem, poses a potential conflict of interest for Schumer around antitrust legislation.

“When they are on opposite sides of the divide it can make the public servant member of the family too sympathetic to the company that employs their child or family member,” Jeff Hauser of Revolving Door Project, which studies money in politics, reportedly told the New York Post.

Schumer is not the only lawmaker with a potential tech-related conflict of interest. “When you put together the amount of money Speaker [Nancy] Pelosi made off tech with the fact that leader Schumer’s two kids work for giant tech companies, Democrats are going to have a very hard time explaining if major legislation doesn’t move forward this session,” a “progressive operative” reportedly told the New York Post.

The publication also has reported that the daughter of Rep. Zoe Lofgren (D-CA), “one of the most vocal opponents of antitrust bills,” works for Google’s legal team.

Open Secrets records revealed that for “all federal candidates,” by October 2020, both Facebook and Twitter gave over 90 percent of their political contributions to Democrats for the 2020 election cycle, particularly to then-presidential candidate Joe Biden. Hundreds of Amazon employees demanded the platform stop selling a book that challenged the woke left’s narratives on gender identity in July 2021.