The battle against Big Tech and woke corporations took another dramatic turn in June as conservatives confronted another hard truth. Not only must Americans face the fear that Big Tech can censor them at a moment’s notice, but now woke corporations are monitoring their social lives to determine if people are safe to keep as customers.

American banks have now entered the political fray and are beginning to lock conservatives out of their savings accounts. Wells Fargo reportedly shut down the bank account of former 2020 Senate candidate Lauren Witzke (R-DE), and she is unfortunately not the first conservative that an American bank targeted for her beliefs. Chase Bank terminated the bank account of then-Rebel Media host Martina Markota in 2019. In what also appears to be resistance to the Second Amendment, banks have increasingly severed their ties with the firearms industry. Chase Bank has notably limited its business dealings with gunmakers.

Big Tech also continued its war against the First Amendment in June. YouTube censored the conservative news platform Real America's Voice on more than one occasion. The Real America’s Voice channel was reportedly suspended for a week after posting an interview with former President Donald Trump. YouTube then reportedly removed another video from the channel that featured an interview with former Missouri Governor Eric Greitens (R).

Woke corporations are at war with the principles that have made America so great for the past two and a half centuries, and they made their goal to silence conservatives by any means necessary clear last month. Here are the five most egregious examples of their censorship in June:

American bank Wells Fargo shut down the account of former GOP Senate candidate Lauren Witzke (R-DE). She claimed on the messaging app Telegram: “Wells Fargo has shut down my bank account, taking all of my money and leaving me with a zero balance.” Witzke added that she called Wells Fargo regarding her account and that the bank responded by calling the termination a “business decision.” 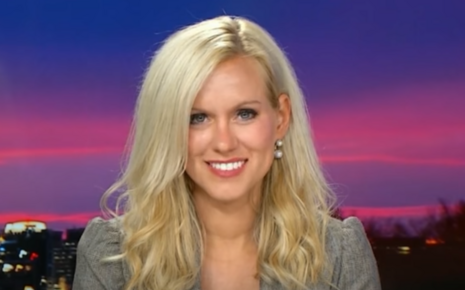 Conservative firebrand Michelle Malkin wrote in a commentary on CNSNews that Witzke’s “entire life savings of roughly $15,500 had been transferred to ‘loss prevention.’” Malkin further asserted that “[Witzke] would be barred from retrieving her funds at any branch office and that they would ‘mail a check.’” Witzke reportedly told Malkin: “The current weaponization of corporations and banks against conservatives and Christians is terrifying.”

MRC Free Speech America reached out to Wells Fargo, but the bank refused to give the specific reason why it terminated Witzke’s account: “Wells Fargo does not consider political views or affiliations in making account decisions. An account may be closed for a number of reasons based on individual facts and circumstances. While we cannot discuss customer accounts because they involve confidential customer information, we can report that we have reviewed this situation, gave ample notice of our decision and it was handled appropriately.”

YouTube suspended the account of the conservative news platform Real America’s Voice for hosting an interview that CBN News Chief Political Analyst David Brody had with former President Donald Trump. The ban reportedly lasted for one week, and Brody said YouTube also deleted the video from the channel’s page along with the suspension.

The interview included Trump saying “I never admitted defeat” in reference to the 2020 presidential election. He also discussed his thoughts on the election’s integrity with Brody: “There is a tremendous percentage [of the public] that thinks the election was rigged and stolen.” However, Big Tech — and more specifically YouTube — prohibits users from questioning the validity of last year’s presidential election.

YouTube then reportedly removed another video from the channel that featured Brody interviewing former Missouri Governor Eric Greitens (R), according to Reclaim The Net. The former governor praised Brody’s previous interview with Trump in the video. YouTube originally banned Trump’s account from the platform in January and has refused to allow him back on. As a result, the former president joined the alternative video sharing platform Rumble in June.

YouTube suspended Senator Ron Johnson (R-WI) from the platform for a week after he posted content featuring experimental treatments for COVID-19. He uploaded two videos of hearings from the Senate Committee on Homeland Security and Governmental Affairs that reportedly mentioned hydroxychloroquine and ivermectin as possible treatments. YouTube subsequently suspended the senator’s account.

Johnson reportedly told Fox News that “YouTube's ongoing COVID censorship proves they have accumulated too much unaccountable power.” He continued: “Big Tech and mainstream media believe they are smarter than medical doctors who have devoted their lives to science and use their skills to save lives. They have decided there is only one medical viewpoint allowed, and it is the viewpoint dictated by government agencies. How many lives will be lost as a result? How many lives could have been saved with a free exchange of medical ideas?”

A YouTube spokesperson reportedly explained to Fox News that the platform censored Johnson’s account “in accordance with our COVID-19 medical misinformation policies, which don’t allow content that encourages people to use Hydroxychloroquine or Ivermectin to treat or prevent the virus.” The platform’s “COVID-19 medical misinformation policy” states that it prohibits content “that contradicts local health authorities’ or the World Health Organization’s (WHO) medical information about COVID-19.”

TikTok is subservient to the genocidal Chinese government and has no problem bringing the Chinese Communist Party’s censorship practices to the United States. The platform reportedly purged conservative commentator Steven Crowder, and his ban appears to be the result of the efforts of a far-left organization that prides itself on censoring conservative viewpoints.

The extreme far-left organization Media Matters celebrated Crowder’s ban from TikTok after attacking the conservative commentator’s content: “Far-right internet personality Steven Crowder has been banned from TikTok following a June 8 Media Matters report highlighting his bigotry on the platform. A TikTok spokesperson confirmed to Media Matters that Crowder’s account had been removed for violating its community guidelines.”

The leftist group released a report earlier in June attacking Crowder for “using TikTok to spread hate to a younger audience.” Media Matters used the report to spread fearmongering rhetoric about Crowder’s popularity: “Crowder’s TikTok follower count and video views have been steadily growing since he began consistently using the platform in April. Despite being relatively new to the site, Crowder has already used TikTok to post transphobic rants, attack transgender actor Elliot Page, and claim that Derek Chauvin didn’t get a fair trial. All of this content seems to violate TikTok’s hateful behavior or misinformation policies.”

Ngo’s podcast was reportedly inactive for a while. The Post Millennial added: “However, the latest episode of the podcast was uploaded more than one year ago and there was no option in the notification email for Ngo to appeal or even seek further information.” SoundCloud appeared to go out of its way to purge an inactive podcast that Ngo had not bothered to update in over a year. Headlines of his podcast included “Ilhan Omar's Strongest Critic ft. Imam Tawhidi” and “Disturbing Truth Revealed About Downfall of Portland Antifa Pub, Cider Riot.”

The Post Millennial recounted that SoundCloud’s reasoning for the permanent ban was “vague and did not specify an exact reason.” SoundCloud’s email reportedly included the statement: “We take the security of our community very seriously. We hope that you can understand that SoundCloud is a place for people to share content which respects our Terms of Use and Community Guidelines.” Ngo said on Twitter that “@SoundCloud has permanently banned me & my podcast @YouShouldNgo.” He added that SoundCloud told him that he “violated its community guidelines without naming the alleged offending content.”