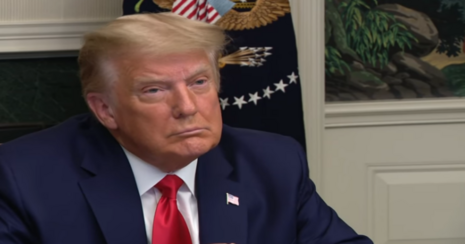 It appears Big Tech does not want former President Donald Trump back online — not yet, at least.

Tech platforms have cracked down tightly on the former president, banishing his presence from their networks. In Big Tech’s latest act of silencing Trump, the unverified account purporting to be CBN News Chief Political Analyst David Brody said YouTube deleted his interview with the former president. Brody, also host of “The Water Cooler” podcast with Real America’s Voice and Just the News, said the interview uploaded to YouTube via Real America’s Voice News’s channel was taken down and that the channel had received “one strike.”

The interview included Trump saying “I never admitted defeat,” in reference to the 2020 presidential election. It also included Trump discussing his thoughts on the fairness of the election, something Big Tech has forbidden him to do on its platforms. “There is a tremendous percentage [of the public] that thinks the election was rigged and stolen,” Trump told Brody during the interview.

YouTube has made it clear that interviews with Trump are not permitted on its platform. An interview with Newsmax that Trump did on Feb. 17 was taken down by YouTube “in accordance with [its] presidential election integrity policy,” the platform told The Epoch Times.

Facebook removed an interview the former president had with his daughter, Lara Trump, in March. A screenshot of the notice the former president’s daughter purportedly received from Facebook indicated that due to Trump’s ongoing ban from its platform, any “content posted in the voice of Donald Trump will be removed and result in additional limitations on the accounts.”

Trump’s attempts to circumvent Big Tech’s censors have not been a match for the authoritarian reach of Silicon Valley either. Trump set up a Twitter-like webpage on his official website called “From The Desk of Donald J. Trump.” Twitter suspended accounts that were posting the former president’s comments he was releasing from his website.

It has become clear the Left wishes to erase Trump from memory. Twitter even skewed from its tradition of allowing the archived tweets of public figures to remain on its platform when it announced it would not be doing so for Trump.

Conservatives are under attack. Contact YouTube at 650-253-0000 and demand that it not target conservatives. If you have been censored, contact us at the Media Research Center contact form, and help us hold Big Tech accountable.