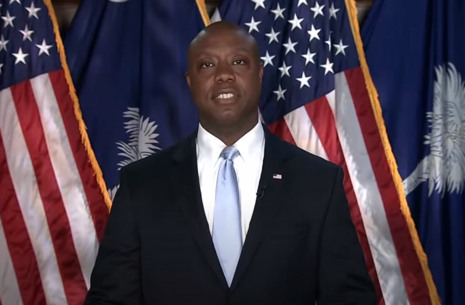 Biden unveiled his massive spending agenda April 28 to the nation in his first joint address to Congress. Scott delivered a rebuttal on behalf of Republicans following the president’s speech. Fox Business host Stuart Varney reported April 29 that Twitter allowed “Uncle Tim” to trend for hours following Scott’s response. “After Sen. Tim Scott’s rebuttal, Twitter let a racial slur against the senator trend on Twitter for hours before they finally blocked it,” Varney said. The trend appeared to be a play on “Uncle Tom.” Liberals have often used the racial slur to demean black Republicans. Twitter reportedly allowed the trend to remain active for about 11 hours before taking it down.

Fox Business General Assignment Reporter Edward Lawrence joined Varney to discuss the issue. “Twitter finally blocked that from trending, but it took about 11 hours for that action to be taken,” Lawrence said. A Twitter spokesperson reportedly said in a statement: “We want Trends to promote healthy conversations on Twitter. This means that at times, we may not allow or may temporarily prevent content from appearing in Trends until more context is available.”

Scott responded to the trend April 29 on Fox & Friends: “Last night what was trending in social media was ‘Uncle Tim.’ They doubled down on this concept of liberal oppression. It is stunning, in 2021, that those who speak about ending discrimination want to end it by more discrimination.”

Twitter’s record of bias against conservatives and Republicans has a well-documented history. The platform permanently banned former President Donald Trump after he called for “peace” following the Jan. 6 riot at the Capitol. Twitter also banned Project Veritas founder James O’Keefe after his investigative outlet released a video allegedly providing evidence that CNN helped Biden in the 2020 election. In another example of bias, Twitter refused to investigate a tweet from LeBron James that appeared to threaten an Ohio police officer.