Twitter refused to investigate an inflammatory tweet by LeBron James for potential violations after the NBA superstar threatened an Ohio police officer. James went after the officer who shot and killed a 16-year-old African-American girl who attacked another girl with a knife. 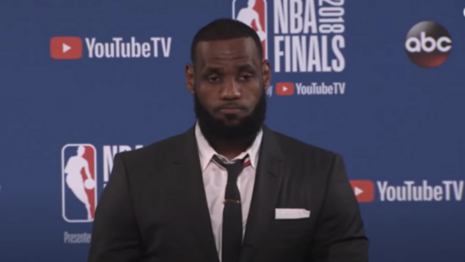 “Our teams are unable to evaluate Tweets that have been deleted since they no longer exist on our service,” a spokesperson for the platform told the Washington Examiner.

James’ tweet showed a photo of the Ohio police officer who shot Ma’Khia Bryant after she attacked two people with a knife. The tweet was captioned "YOU'RE NEXT #ACCOUNTABILITY."

The tweet, however, failed to acknowledge that video of the incident appears to show that the officer stopped Bryant seconds before she stabbed an unknown female.

Similarly, Senator Ted Cruz (R-TX) called James’ tweet a "grossly irresponsible message for LeBron James to send out. In this instance, 'you're next' could certainly be interpreted by some, even, as a call for violence.”

James tried to defend his rush to judgment late Wednesday evening in a follow-up tweet, adding that he deleted his first comment because it was "being used to create more hate."

“I’m so damn tired of seeing Black people killed by police. I took the tweet down because [it’s] being used to create more hate -This isn’t about one officer. it’s about the entire system and they always use our words to create more racism. I am so desperate for more ACCOUNTABILITY,” the tweet read.

Twitter’s argument that it cannot evaluate deleted tweets stands in stark contrast to the standard it has applied against conservatives for years.

At the beginning of the year, Twitter suspended President Trump after he called for peace in the wake of the January 6th riots at the Capitol.

Trump’s video tweet was labeled with the following warning immediately after its posting: “This claim of election fraud is disputed, and this Tweet can’t be replied to, Retweeted, or liked due to a risk of violence.”

The “risk of violence” claim was strangely far-fetched since the president made it clear that he was calling for “peace,” and urged the protestors to go home.

Prior to Trump’s leaving office, a study from NewsBusters found that the platform censored Trump and his campaign over 600 times, whereas the Biden campaign had been censored zero times.