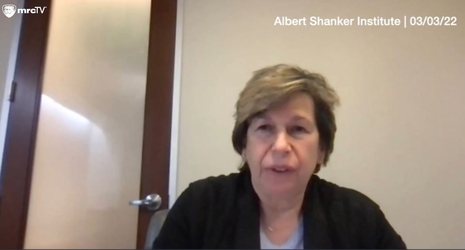 American Federation of Teachers President Randi Weingarten said she’s happy that NewsGuard highly rates some news outlets that have been critical of her. And her group’s new partner was right by her side.

During a webinar Thursday, she and NewsGuard CEO Steven Brill weren’t even willing to answer a question about their clear left-skewed political leanings.

Brill and Weingarten touted their new partnership. The partnership aims to “help” K-12 students “navigate a sea of online disinformation,” according to an announcement. They portrayed the partnership as credible and nonpartisan, even though Weingarten appeared on stage with Virginia Democratic gubernatorial candidate Terry McAuliffe the night before Republican Virginia Gov. Glenn Youngkin won the election in November.

Appearing on C-SPAN last week, Brill said, “I am not in favor of banning anything.”

Given Weingarten’s transparent partisanship and the formation of the new partnership, MRC asked the two executives how anyone can take NewsGuard’s claims of neutrality seriously. They totally ignored the question, even as they answered several questions posted in the Zoom Q&A chat.

Weingarten has voraciously called for schools to require K-12 students to get COVID-19 vaccines to return to school in person. She also encouraged schools to close for an extended period after the pandemic started.

When NewsGuard started in 2018, “we thought most of what we were going to do had to do with political, uh, misinformation,” Brill said. “We didn’t know about ‘Stop the Steal’ then, but there was all this political misinformation, Russian propaganda, and yeah, there’s a lot of that stuff as we’re seeing in spades today. But by far the largest category of misinformation, and arguably the most dangerous, has to do with health care.”

On its website, NewsGuard brags that it feeds the World Health Organization reports highlighting “top COVID and vaccine myths circulating across the major social platforms.”

The post links to marketing materials that note the health division of Publicis Groupe, a major early funder for NewsGuard in 2018, boasted “13 of the top 20 global pharmaceutical companies” as clients. However, it’s also worth noting that Publicis Groupe divested its health care division in 2019.

“If there’s anyone who has been viewed as an enemy of Big Pharma, it’s you,” Weingarten hailed Brill.

Brill then pivoted the conversation to talk about alleged health “misinformation,” “anti-vaxx decisions plaguing the world,” and so-called 5G conspiracy theories. He lauded U.S. Surgeon General Vivek Murthy for calling out alleged health care “misinformation” as a big obstacle, and he complained that programmatic ad revenue had contributed to alternative COVID-19 narratives. Then Brill used rhetoric to lash into Kennedy.

Weingarten flimsily attempted to distinguish NewsGuard’s role from her and Brill’s politics earlier in the discussion.

“There’s lots of journals who have actually criticized me quite a bit that get a [positive rating] on NewsGuard, and I’m glad that, um, that there’s a tool that actually does this,” Weingarten said. “That question is precisely one of the reasons why we are trying to separate out political ideology from what is and isn’t factual.”

The problem is that politics is embedded in NewsGuard’s framework and in AFT’s leadership.