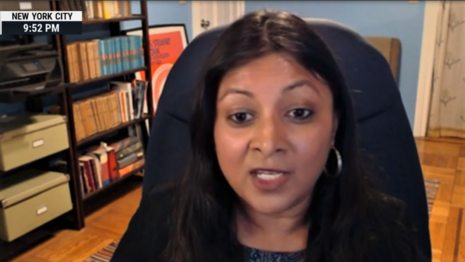 Tuesday’s New York Times lead story by Apoorva Mandavilli on Pfizer pushing to get its coronavirus vaccine approved for children was filled with the reporter’s typical coronavirus scaremongering. This time, it was about the dangers it posed to children: “Pfizer Says Shot Safely Benefits Children 5 to 11 – Seeking F.D.A. Approval – Urgency as Cases Rise in Young – Trial Review May Take Weeks.”

The Pfizer-BioNTech coronavirus vaccine has been shown to be safe and highly effective in young children aged 5 to 11 years, the companies announced early Monday morning. The news sets the stage for authorization of the vaccine for younger children, possibly before the end of October.

The need is urgent: Children now account for more than one in five new cases, and the highly contagious Delta variant has sent more children into hospitals and intensive care units in the past few weeks than at any other time in the pandemic.

Pfizer and BioNTech announced the results in a statement that did not include detailed data from the trial. The findings have not yet been peer-reviewed nor published in a scientific journal.

But the new results dovetail with those seen in older children and in adults, experts said.

Nearly 30,000 children were hospitalized for Covid in August; the least vaccinated states reported the highest rates. At Seattle Children’s hospital, about half of the children who are admitted for Covid are older than 12, according to Dr. Danielle Zerr, a pediatric infectious diseases expert at the hospital.

“For Covid” or “with Covid”? The wording is significant. As Kelley K pointed out on Twitter, Mandavilli apparently got the 30,000 figure from this Times piece, but the wording there was “with Covid,” which includes children admitted with other illnesses, who also test for Covid. Kelley K also noted the Times caveat “Data includes hospital admissions of those with either confirmed or suspected Covid-19.” (Emphasis added.)

As ideological battles over masking and vaccine mandates play out in communities, the reopening of schools has fueled the surge. In Mississippi, among the states without a mask mandate, nearly 6,000 students tested positive for the virus in one week, and more than 30,000 students, teachers and staff had to be quarantined.

To that, Karen Vaites rejoined on Twitter, “I could point you to the data in Denmark, Scotland, France, the UK, the US, the state of Florida, that show no sign that school reopening increased COVID rates....”

Even in Mississippi, Apoorva’s example of a place where school reopening caused a case surge, Vaites noted that Mississippi case numbers started declining in early September -- after schools had reopened.

Apoorva quoted a member of her fan club, influential teachers union head Randi Weingarten, who had previously used Mandavilli’s alarmist reporting as a guide to help keep schools shut for a year.

“This is one huge step toward beating Covid and returning to normalcy. I don’t think it changes the conversation around vaccine requirements for kids,” said Randi Weingarten, president of the American Federation of Teachers, a national union.

An important admission was tucked deep inside.

Given how rarely children become severely ill, the trial was not designed to draw meaningful conclusions about the vaccine’s ability to prevent Covid or hospitalization.

Severe illness is so rare in children they can’t work up a proper study for it -- but it’s still “urgent” to vaccinate children?

Also note how the pro-government New York Times is suddenly all about shedding bureaucracy and dismissing (some) parental concerns in the name of getting shots in children’s arms immediately.

Parents and some public health experts have clamored for the F.D.A. to expedite its review process….

Then Mandavilli arrogantly suggested that parents concerned about vaccine safety for children “may be influenced by misinformation circulating on social media.”