Project Veritas founder James O'Keefe filed a defamation lawsuit against CNN after an anchor purportedly made a false claim about Twitter’s decision to permanently suspend his account. 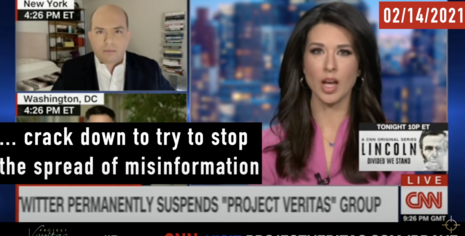 O’Keefe claimed that CNN anchor Ana Cabrera defamed his character while reporting on Twitter's crackdown on users to "try to stop the spread of misinformation" and mentioned the suspension of Project Veritas as an example. O’Keefe alleged that contrary to Cabrera’s claim, however, Project Veritas was suspended by Twitter over an alleged Terms of Service violation involving the sharing of private information.

Defamation of a public figure is more difficult to prove than the standard cause of action. O'Keefe argued that he can prove malice using tweets from the anchor that referred to the private information policy that resulted in the permanent suspension of his account. O’Keefe said he will also rely on a report from CNN that correctly identified the reason for the suspension.

"Project Veritas is an investigative journalism organization whose reputation depends on its ethical and transparent conduct, and its production of reliable and accurate news reporting. By claiming Project Veritas was 'spreading misinformation,' CNN directly damaged and impugned Project Veritas’s reputation," the complaint reads. "CNN’s factual claim that Project Veritas was banned for "promoting misinformation," instead of truthful reporting of private facts, is patently and demonstrably false, and CNN maliciously made its claims with knowledge they were false or with reckless disregard for their falsity."

This latest lawsuit comes after O’Keefe filed suit against Twitter for defamation. Twitter suspended his account for allegedly violating Twitter’s rules on “platform manipulation and spam.” At the time of his suspension, O’Keefe had nearly one million followers.

The purported violation came after O’Keefe’s posted a video of CNN technical director Charlie Chester discussing the network’s anti-Trump coverage. At the time, Twitter told the Media Research Center: “[a]s outlined in our policy on platform manipulation and spam, ‘You can’t mislead others on Twitter by operating fake accounts,’ and ‘you can’t artificially amplify or disrupt conversations through the use of multiple accounts.’”

O’Keefe’s lawsuit against Twitter alleged that the platform’s “published claim that Mr. O’Keefe “operat[ed] fake accounts” is patently and demonstrably false.” The suit also claimed that “Twitter was in a unique position to know that this claim was false.”