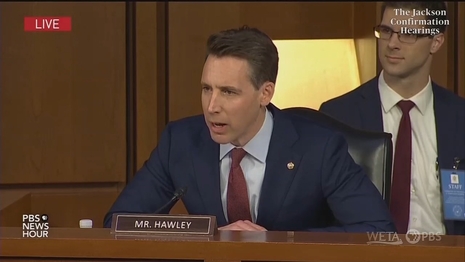 The Disinformation Governance Board (DGB) may be paused, but senators on Monday demanded the Biden administration release documents and communications from the entity many have nicknamed the “Ministry of Truth.”

Thanks to a group of inquisitive senators, the people behind one of the most dystopian government departments in history are in the hot seat.

The letter cited Mayorkas’s own testimony, scorching him for appointing the now-resigned disinformation czar Nina Jankowicz: “On May 4, 2022, you testified before the Senate Homeland Security and Governmental Affairs Committee about the creation of this new board and accepted sole responsibility for appointing Nina Jankowicz as its Executive Director. Surprisingly, you testified that you were not aware of her long history of partisan public statements.”

The letter then demanded that DHS turn over all records related to the DGB, including:

a. written or recorded communications concerning the formation of the Board;

b. the agenda or minutes from any meeting at which the Board’s formation was discussed;

c. any legal review to determine whether the activities of the Board would be authorized by the Constitution of the United States;

d. any communications or records about the individuals who would be recruited to serve on the Board;

e. any communications concerning the appointment of an executive director for the Board; and

f. any communications with the White House about the formation of the Board or appointment of officials to serve on the Board.

The senators who signed the letter have been some of the most prominent figures in the ongoing battle for free speech. Republican Sens. Josh Hawley (MO), Rick Scott (FL), Rand Paul (KY), Ron Johnson (WI) and James Lankford (OK) all signed the letter.

The Biden DHS released a Terrorism Advisory Bulletin in February claiming that “The United States remains in a heightened threat environment” due to “false or misleading narratives and conspiracy theories.” DHS also warned against “misleading narratives” that can “undermine public trust in U.S. government institutions.”