Comedian, actor and commentator Russell Brand wrecked the very idea of a Disinformation Governance Board and the war on disinformation itself: “Who gives a shit about disinformation? Sort out getting baby food!”

During an episode of his show released Sunday, Brand blasted the very concept of a board to police people’s free speech, noting it would be neither effective nor appropriate based on all the other crises in the world. Brand commented on how the Department of Homeland Security (DHS) has “paused” its Disinformation Governance Board.

“What I don't think we should be doing is controlling and regulating free speech in order to protect marginalized communities,” because people would inevitably find that “down the line that what we’ve just done is accidentally granted the government more power to control dissent,” he said.

Multiple clips of now-resigned disinformation czar Nina Jankowicz punctuated Brand’s video with cringeworthy humor. Brand observed that the rise of evil in the modern world looks remarkably different from what many people have been taught to watch out for: “We’ve been given such a clear vision of what evil looks like,” said Brand, citing past decades’ examples of terrorism or communism, saying that now, instead “tyranny looks like what’s happening now.”

Brand went on to suggest that freedom, by its very nature, is messy, but crucial to a thriving society: “Freedom is messy, people bang each other in the ribs by mistake with their elbows, tread on each other's toes, misspeak, mispronounce, miss-say stuff all the time. But misinformation and misinformation boards are not the solution to that problem.”

Instead, Brand envisioned a better world while warning that the United States government has a grim record for underhanded deeds:

“When people feel a little more fulfilled and connected, you might communicate with one another a little better. The fact is that the objective of not hurting one another is a beautiful objective, because why would we hurt each other if we could avoid it? But I simply do not trust that that has ever been an objective of the United States government. It doesn’t make sense.” 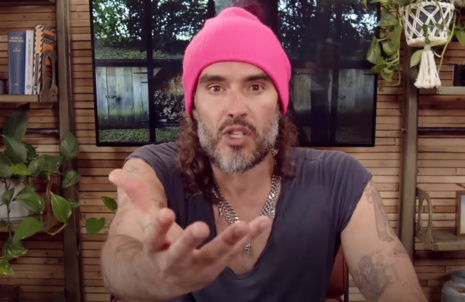 In the March clip, he shared a screenshot from the Feb. 7 Biden DHS Terrorism Advisory Bulletin. The bulletin proclaimed that “The United States remains in a heightened threat environment” due to “false or misleading narratives and conspiracy theories.”

DHS also warned against “misleading narratives” that could “undermine public trust in U.S. government institutions.” In other words, questioning the credibility of the powers that be is forbidden.