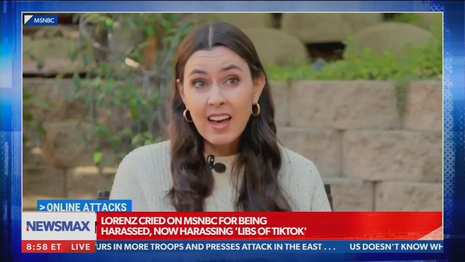 Washington Post tech reporter Taylor Lorenz released an article sharing the personal info of the creator behind the popular Libs Of Tik Tok Twitter account in a Post report. The internet wrecked her for it.

Political commentators across the political spectrum slammed infamous disgraced journalist Lorenz after she posted a piece lashing out at a woman behind a popular Twitter account. “We can confirm public records list the address Doxxed by Taylor Lorenz as the private personal residence of Libs of TikTok,” Popular podcaster Tim Pool revealed in an April 19 tweet. “Revealing the name of @LibsofTikTok is one thing but @TaylorLorenz went well beyond by publishing the private home address as well. WaPo appears to have removed the address after a backlash.”

Libs Of Tik Tok, much like Defiant L’s, gained fame as a social media account that collects cringeworthy or sinister content from liberals and exposes it to conservative audiences. Daily Wire founder Ben Shapiro commented in a Twitter thread how Lorenz beclowned herself for targeting such an innocuous content aggregator like Libs Of TikTok: “Taylor Lorenz is a terrible journalist and worse human. Targeting a Twitter account that literally just posts Leftists owning themselves because that account damages the Left is pure Lorenz.” He then added, “Now, after tracking down the Libs Of Tik Tok's relatives, Taylor Lorenz will whine that people are being meeeeeeean to her. F*** off, lady.”

Lorenz gained notoriety as a crybully for exposing conservatives’ private info, but acting as if it is a moral crime to be publicly scrutinized for doing so. “Wasn’t this psycho on tv 2 weeks ago actually crying about the exact type of behavior that seems to be her exact business model[?]” Donald Trump Jr. inquired in a tweet with a photo of what appears to be Lorenz looming in a doorway to ask questions. “If only she tried to report on real bad actors rather than a random personalities on social… but we know that won’t happen.”

Breaking Points co-host Saagar Enjeti suggested in a tweet that Lorenz’s form of journalism is becoming increasingly loathed even by some of her liberal allies, and is ultimately a sign of an industry flailing for relevance and credibility: “Taylor Lorenz’s rise is a proxy for death of US media credibility. *EVERYONE* in the business privately admits she is out of control and yet they say nothing OR defend in abstract. They are cowards and their inability to internally police is why they have no credibility.”

As if to prove Enjeti’s point, even pro-censorship liberal and former Facebook employee Alex Stamos addressed Lorenz’s tactics: “De-anonymizing somebody online in a major outlet is a form of doxxing, period. Even if done with public records. Even if done to somebody you dislike. That doesn't mean it's not justified by circumstances, but let's not mince words when justifying it.”

Conservatives are under attack. Contact your local representative and demand that they condemn the liberal media for doxxing, or the weaponizing of private information against common people. If you have been censored, contact us using CensorTrack’s contact form, and help us hold Big Tech accountable.