World-famous podcaster Joe Rogan stirred up controversy with Cancel Culture mobs by interviewing medical professionals who questioned shifting narratives of the COVID-19 pandemic. Since then, rocker Neil Young pulled his music from Spotify in protest, causing Spotify and Rogan himself to respond.

The Joe Rogan Experience host released a video that could be described as a “non-apology” to the people offended by so-called “misinformation” in his podcast interviews. “The problem I have with the term ‘misinformation,’ especially today, is that many of the things that we thought of as misinformation just a short while ago are now accepted as fact,” he explained in a video on his Instagram page.

He provided examples of claims that went from alleged “misinformation” to widely accepted facts after a few months. Then, he noted how he had discussed many of those exact, now acceptable, narratives with qualified professionals: “All of those theories that at one point in time were banned, were openly discussed by those two men that I had on my podcast that had been accused of dangerous misinformation.”

He listed a few major COVID-19 claims that were censored for being so-called “conspiracy theories,” but now are the predominant explanations for the course of the pandemic:

Rogan did say, however, that he would accept disclaimers on his podcasts about COVID-19 “saying that you should speak with your physician and that these people and the opinions that they express are contrary to the opinions of the consensus of experts.” 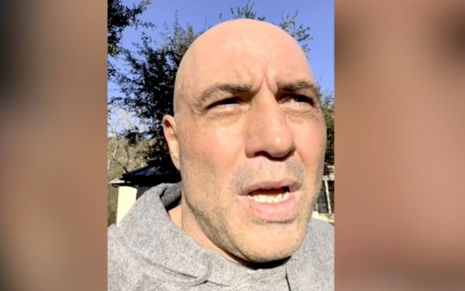 Spotify announced in a blog that it is “working to add a content advisory to any podcast episode that includes a discussion about COVID-19.” It further explained that “This advisory will direct listeners to our dedicated COVID-19 Hub, a resource that provides easy access to data-driven facts, up-to-date information as shared by scientists, physicians, academics and public health authorities around the world, as well as links to trusted sources.”

In late January, Young issued an ultimatum to Spotify. “Neil Young posted a since-deleted letter to his management team and record label demanding that they remove his music from Spotify,” Rolling Stone reported Jan. 24. “‘I want you to let Spotify know immediately TODAY that I want all my music off their platform...They can have [Joe] Rogan or Young. Not both.”

Young later accused Spotify of “‘spreading fake information about vaccines” and “potentially causing death to those who believe the disinformation,’” according to the magazine.

Conservatives are under attack. Contact your local representative and demand Big Tech mirror the First Amendment while providing transparency, clarity on “hate speech” and equal footing for conservatives. If you have been censored, contact us using CensorTrack’s contact form, and help us hold Big Tech accountable.