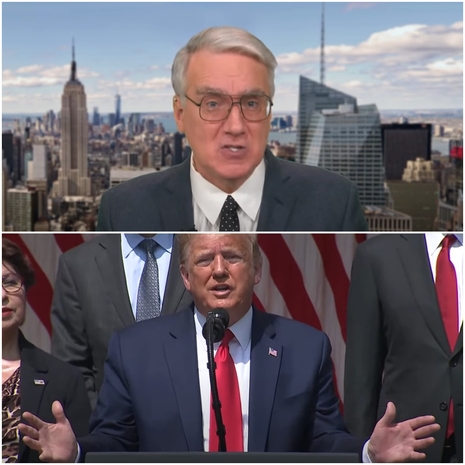 Liberal commentator Keith Olbermann said the president is undermining American democracy from his “toilet,” and he must be stopped.

While President Donald Trump remains in office until at least January 20, calls from the left to permanently ban him from Twitter have begun to sprout. Olbermann is even calling for Trump to be removed from the platform while the president is still in office.

Olbermann exclaimed on his nightly YouTube broadcast, “The Worst Person in the World,” that “Twitter must ban him. Today. Right now. Permanently. Ban Trump from Twitter for life.” Olbermann said Trump’s tweets were “direct stochastic calls for the violent overthrow of the democratically-elected new government of the United States.” Olbermann added that anyone else would “have already been investigated by the FBI for violation of 18 U.S. code 2385 – advocating overthrow of government. The prison term is 20 years.”

“Any other Twitter account would have already been permanently suspended,” Olbermann said. “[E]ven as reality closes off his other microscopic chances to destroy this country, Twitter gives him a bottomless pit of filth to throw against the wall.”

He continued, “Trump would take his snowflake-ass somewhere else, but this free megaphone the size of planet earth would be shut off.”

The president’s fears that the election has not been conducted fairly may undermine Olbermann’s reality, but it is very much a reality for many of the approximately 73.5 million American’s who voted for President Trump.

Olbermann often doesn’t seem very in touch with reality himself. In another one of his YouTube broadcasts, Olbermann said that in a best case electoral scenario a “Trump-led minority will continue to terrorize this country.” He then went on to say that conservatives like Sen. Mike Lee (R-UT), Attorney General William Barr, Fox News anchor Sean Hannity, Vice President Mike Pence and newly sworn Supreme Court justice Amy Coney Barrett “must be prosecuted and convicted and removed from our society while we try to rebuild it and to rebuild the world Trump has nearly destroyed by turning it over to a virus.”

Since May 31, 2018, President Trump and his campaign have been censored 194 times. During the week of the election, Trump’s personal account received 64 labels from Twitter marking a 77 percent increase in censorship over the previous week. Twitter announced in an Oct. 9 blog that labeled tweets are “de-amplified” through the platform’s own recommendation systems.

Conservatives are under attack. Contact Twitter and demand that the platform mirror the First Amendment: Tech giants should afford their users nothing less than the free speech and free exercise of religion embodied in the First Amendment as interpreted by the U.S. Supreme Court. If you have been censored, contact us at the Media Research Center contact form, and help us hold Big Tech accountable.