For the fifth straight night, the major broadcast networks used their evening newscasts to blast the State of Indiana on Tuesday for sparking an “uproar” and “national outcry” over its Religious Freedom Restoration Act (RFRA) while also choosing to heavily promote the arguments of opponents.

On the CBS Evening News, anchor Scott Pelley informed viewers in a tease that “Indiana’s governor responds to the national outcry over the so-called religious freedom law.” Prior to a report from correspondent Adriana Diaz, the liberal anchor exclusively touted the viewpoint of those against RFRA: “Critics say the law is not about freedom, it’s about legalizing discrimination against gays by allowing businesses to deny them service.”

Diaz then started with the latest from Indianapolis as “Indiana Governor Mike Pence bowed to public pressure today, saying his state’s new religious freedom law needs to be clarified.” Later, she provided more spin for opponents by cheering the “protests and boycotts” against the law “led by gay and lesbian groups” that “have gained steam all week.”

To enhance that side even further, Diaz included a soundbite from an owner of almost a dozen local restaurants in Indianapolis who Diaz said “the stakes are high, and she wants the law repealed.”

NBC Nightly News interim anchor Lester Holt declared in the program’s first tease that Pence was “bowing to pressure” in “promising to rework the law” as “a backlash threatens to hit the state’s bottom line.”

Before tossing to NBC News correspondent Gabe Gutierrez in Indianapolis, Holt added that Pence responded “to blaring headlines” after “[f]acing a growing opposition from inside and outside the state and a threat to its economy.”

Turning lastly to ABC’s World News Tonight, anchor David Muir also brought up the front-page editorial from The Indianapolis Star while correspondent Gio Benitez ruled that Pence “ask[ed] for a fix after days of protests and anger over that controversial new Indiana law.”

During his report, Benitez again promoted Pence’s interview with George Stephanopoulos from Sunday by saying that “pressure” had been “building” for Pence ever since it took place. Later, he promoted the reaction to the law from White House Press Secretary Josh Earnest, who stated the White House’s belief that the law is “not fair.”

In a study published on Tuesday afternoon, the Media Research Center’s Geoffrey Dickens documented the massive disparity in coverage when comparing the attention the Indiana law has received to the news that Hillary Clinton has wiped clean her private e-mail server.

The relevant portions of the transcript from the CBS Evening News with Scott Pelley on March 31 can be found below. 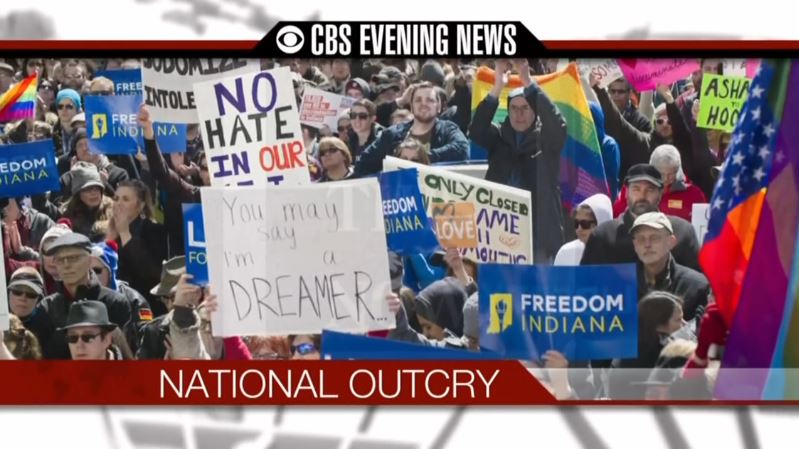 [ON-SCREEN HEADLINE CAPTION: “We Will Fix This”]

PELLEY: Today, Indiana’s governor vowed he will fix a controversial religious freedom law. Critics say the law is not about freedom, it’s about legalizing discrimination against gays by allowing businesses to deny them service.

INDIANA REPUBLICAN GOVERNOR MIKE PENCE: The smear here against this bill is that it created a license to discriminate or a license to deny services, and that's just completely false and baseless.

DIAZ: Pence asked his legislature for new language, making it clear that, while religious freedoms would be upheld, businesses cannot deny services to anyone. He wants it on his desk by the end of this week. [TO PENCE] Governor, were you expecting this type of backlash to the law?

PENCE: Was I expecting this kind of backlash? Heavens, no. 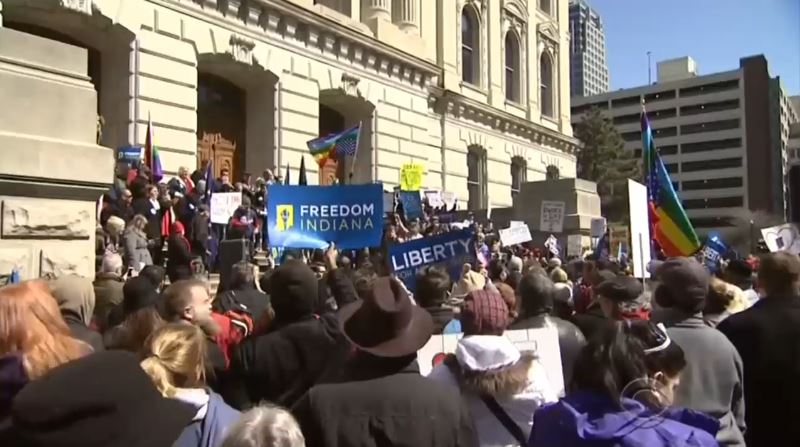 DIAZ: Protests and boycotts led by gay and lesbian groups, who feared the law would allow discrimination, have gained steam all week. Last night, the Indianapolis City Council voted to denounce the law. There are 19 other states with similar religious freedom laws, though several of them also have gay and lesbian anti-discrimination protections in place. Today, despite the uproar in Indiana, the Arkansas State Legislature voted to pass its own version of a religious freedom law. Governor Pence’s announcement comes four days before the Final Four tips off in Indianapolis. The tournament is expected to generate $70 million for the city and overall, visitors bring in $4.4 billion a year to the state. Martha Hoover owns 11 local restaurants. She says the stakes are high, and she wants the law repealed.

A partial transcript of the tease and segment from March 31's NBC Nightly News can be found below. 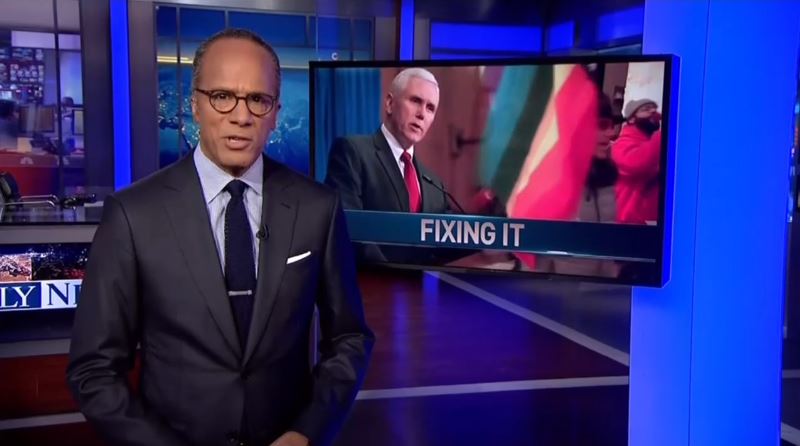 LESTER HOLT: On this Tuesday night, fixing it. Bowing to pressure, Indiana’s governor promising to rework the law that was billed as ensuring religious freedom, but viewed by many as a life to discriminate as a backlash threatens to hit the state's bottom line.

HOLT: Facing a growing opposition from inside and outside the state and a threat to its economy, Indiana’s governor, in a response to blaring headlines like this in The Indianapolis Star, has called for a change to the controversial law that some believe is worded in which a way opens the door to legalized discrimination. While arguing that critics and some in the media have gotten it wrong, Governor Mike Pence says he wants legislation on his desk this week that clearly spells out the religious freedom law does not allow businesses to discriminate and as Indiana rushes to calm the uproar tonight, another state may be about to step into the fray with its own law.

GABE GUTIERREZ: Today, Pence answered a question he had repeatedly dodged over the weekend. [TO PENCE] Under this law, as it’s written, is it legal for a florist to deny services to a same-sex couple citing their religious beliefs?

PENCE: This law does not give anyone a license to deny services to gay and lesbian couples.

GUTIERREZ: So why did this law pass in Indiana now? Well, the governor says it was on the heels of the recent Hobby Lobby Supreme Court decision that strengthened religious protections, but critics of the bill say that the timing was due to Indiana's same-sex marriage ban being overturned last year.