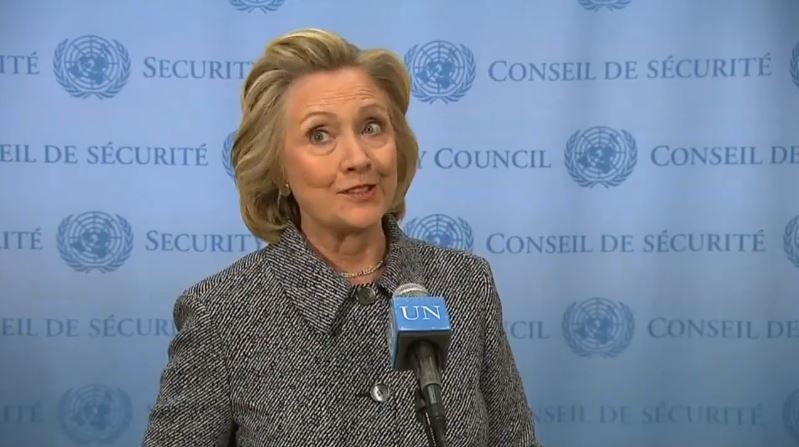 On Thursday night and Friday morning, the major broadcast networks neglected to cover a new poll from Reuters/Ipos showing support for likely Democratic presidential contender Hillary Clinton slipping among Democrats following the e-mail scandal as a majority of voters expressed support for an independent review of all her e-mails as well as the belief that she hasn’t entirely honest in her responses.

The poll found that Democratic support for Clinton has fallen below 50 percent to 45 percent with 15.5 percent stating that they are “less likely to vote for her” in the primaries after being at 10 percent back on March 10.

Among the many questions that Reuters themselves buried in an article about the poll, a full 90 percent replied that Clinton was fully aware of what she was doing by having a private e-mail server (as opposed to being unaware of federal rules) and just over 73 percent of respondents disagreed with the assumption that she had the private account just so she could “keep her communications more confidential and secure.”

Concerning whether she was honest in her March 10 press conference, the Reuters/Ipos poll had even more bad news for the former Secretary of State. 73.4 percent of all voters disagreed with the premise that she’s been honest with even 59 percent of Democrats stating that Clinton wasn’t truthful.

While on the topic of her press conference at the United Nations, a massive majority believed that she was not composed at all while commenting on the e-mail scandal as about 63.7 percent thought so compared to only 36.3 percent thinking that she had it all together.

When asked about whether “[t]here should be an independent review of all of Hillary Clinton’s emails from her personal account to ensure that she has turned over everything work-related,” the poll found that 55.2 percent either strongly or somewhat agree that Clinton should comply with such a request.

Turning to some ramifications from the scandal for Clinton, a combined 44.7 percent said that what’s transpired will hurt Clinton for 2016. In a other question their own article skipped, 42.5 percent believed strongly or somewhat so that Clinton broke the law by exclusively using and keeping under wraps her private e-mails.

As for what the networks covered on Thursday night and Friday morning instead of the poll, Thursday’s CBS Evening News with Scott Pelley devoted one tease and brief totaling 29 seconds to a high-speed chase in Ontario, California from the night before of a man on a motorcycle who, at one point in the chase, drove by standing on the seat of his bike.

Meanwhile, the Friday edition of ABC’s Good Morning America spent 51 seconds on video of a man from National Geographic being chased by a giant male tortoise for some 400 yards after he stumbled upon and disrupted the male mating with a female tortoise.

Finally, NBC’s Today found it more pertinent to use one minute and 17 seconds of airtime to discussing comments recently made by actress Eva Mendes to Extra where she joked that she's not a fan of women wearing “sweatpants at home” as it’s the “[n]umber one cause of divorce in America.”

In addition, Today reserved time for a six-minute-and-52-second segment on a new HBO documentary on Scientology with a large part of the report devoted to the role Scientology played in the erosion (and eventually divorce) of the marriage between Nicole Kidman and Tom Cruise