All three major broadcast networks took time during their post-Oscars stories on Monday night to mention actress Patricia Arquette’s calls for “wage equality” and “equal rights for women,” but it was the CBS Evening News that went one step further by devoting a whole segment to the topic and used loaded statistics to craft a one-sided argument to prop up Arquette’s rant.

Anchor Scott Pelley noted her as one example of how award winners “used the national stage as a soapbox” and gushed that “she has point” when it comes to the issue of what men and women earn.

“According to the Census Bureau, for every dollar a man makes, a woman earns just 78 cents for doing the same job,” said Pelley prior to Jericka Duncan’s equally supportive segment for Arquette.

Using a study by the far-left American Association of University Women, Duncan lamented that full-time female workers, women CEOs, legal professionals, actors, and college graduates all earn “less than their male counterparts.” Duncan also turned to the director research of a firm known as Catalyst to continue advancing this long-held liberal argument that the pay gap is “impacting our families and it's impacting our economy.”

Duncan ended her segment by worrying that “if this wage disparity continues at this rate, experts say we won't see equality for women until 2058.” Nowhere in the two-minute-and-17-second report was there even a mention of an opposing viewpoint.

As per the norm for many liberal arguments, there’s far more to this story. A CNN Money story from October 2014 reported that the “78 cents” statistic isn’t exactly encapsulating as “the wage gap isn’t that simple.” While it also brought up the same study as Duncan, the article did highlight how there’s more than meets the eye:

The stat we're all so familiar with “is an aggregate of all men and women in the workplace,”  said Christina Hoff Sommers, a resident scholar at the American Enterprise Institute. It doesn't take into account important variables like education level, total hours worked, type of work and job tenure, she said.

So, while Census Bureau data says the average woman working full time made nearly 22% less than her male counterpart in 2013, or 78.3 cents on every dollar, that doesn't mean that all women get paid less to do the exact same job as men.

In addition, such statistics on what women earn compared to men fail to consider a variety of other categories that, according to a Heritage Foundation study, include industry, “career interruptions,” levels of experience, and even how job benefits can be unique. For example, Census data from 2008 reported that single women living in a metropolitan areas without children and in the 20s earn eight percent more than their male counterparts.

Two other key facts that Duncan omitted from her report were that more women than men are attending college today and are growing richer at faster rates than men.

When former Georgia Democratic gubernatorial candidate Jason Carter brought up the previous Census statistic in April 2014 (77 cents for every $1), Politifact ruled that Carter’s claim was “mostly false” for many of the same reasons as cited above.

Meanwhile, ABC’s World News Tonight spun Arquette’s comments as addressing “the moms and families across this country” that had numerous audience members “cheering her on.” On NBC Nightly News, correspondent Joe Fryer included Arquette as one recipient that used the stage as “a megaphone” and “more of a soapbox.”

The relevant portions of the segment from the CBS Evening News with Scott Pelley on February 23 are transcribed below. 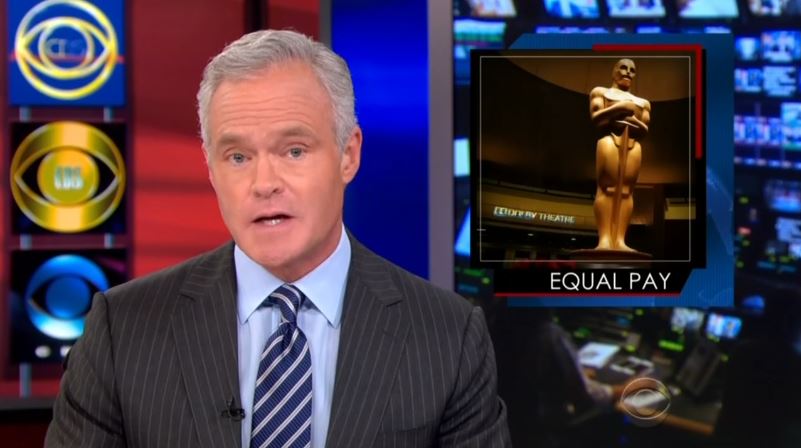 SCOTT PELLEY: As often, some actors used the national stage as a soapbox. This was supporting actress Patricia Arquette.

PATRICIA ARQUETTE: It's our time to have wage equality once and for all and equal rights for women in the United States of America.

PELLEY: And she has a point. According to the Census Bureau, for every dollar a man makes, a woman earns just 78 cents for doing the same job.

DUNCAN: Among full-time workers, women earn 18 percent less a week than men. Women CEOs make 20 percent less. In the legal procession, women make 43 percent less than their male counterparts. Hollywood is pointing out that divide where women in arts and entertainment are making 21 percent less. It's an uneven playing field from the start. A year after graduation, men are already earning 7 percent more than women according to a study by the American Association of University Women and once the salary is set, that gap widens over time.

ANNA BENINGER: What we found is that women are not getting paid equally for equal work with equal experience.

DUNCAN: Anna Beninger is a director of research at Catalyst, a non-profit that promotes more opportunities for women. 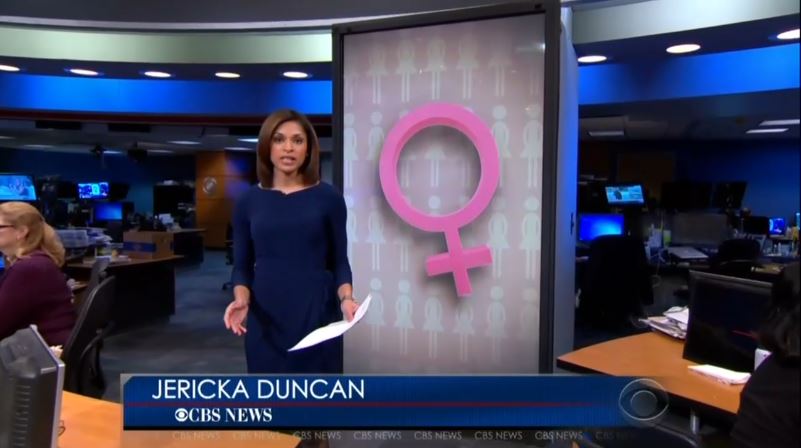 BENINGER: When you think about the impact that a gender wage gap has on someone's lifetime earnings, you know, with women being four out of ten breadwinners these days, it's having a huge impact beyond just the women themselves. It's impacting our families and it's impacting our economy.

DUNCAN: Scott, if this wage disparity continues at this rate, experts say we won't see equality for women until 2058.