While reporting on the aftermath of the weekend terrorist attacks in Copenhagen, ABC and CBS neglected to mention in their Monday evening reports that the man believed to have carried out the attack that killed two had pledged his allegiance to ISIS and its leader, Abu Bakr al-Baghdadi, just prior to the first attack at a free speech event.

Even though ABC’s Terry Moran referred to the attack as a “terror spree” and “terror” on World News Tonight with David Muir, he failed to go any further and mention Islamic extremism or that it was an Islamic terror attack.

CNN initially highlighted the story on CNN Newsroom with Brooke Baldwin Monday afternoon and then in an article on CNN.com that reported:

The man suspected of killing two people in Copenhagen swore fidelity to ISIS leader Abu Bakr al-Baghdadi in a posting made on what's apparently his Facebook page just before the weekend shooting spree.

The post pledges “allegiance to Abu Bakr in full obedience in the good and bad things. And I won't dispute with him unless it is an outrageous disbelief.”

The suspect in Saturday's attack has been named as Omar Abdel Hamid El-Hussein, a senior member of the Danish government said. Police have not formally identified the gunman, who opened fire at a free speech forum in Copenhagen on Saturday before shooting several people outside a synagogue and then firing at police. Police killed him in the shootout.

Moran simply concluded his report that included interviews with eyewitnesses and video from a vigil that took place in Copenhagen by noting that “police are confirming two arrests in the case, alleged accomplices, and investigators are asking, was el-Hussein radicalized in prison or online or was this terror purely home grown.”

The CBS Evening News was only a step up from Moran and ABC as anchor Scott Pelley noted in a news brief that the shooter, Omar el-Hussein, “may have been influenced by Islamic radicals while behind bars.”

In contrast, NBC Nightly News interim anchor Lester Holt described what took place as “terrorist shootings” and “terrorist violence” while foreign correspondent Keir Simmons brought up the fact that Saturday’s violence comes as “anti-Semitism in Europe is on the rise” and the desecration of “a Jewish cemetery in France” also happening over the weekend.

Simmons ended the segment by relaying the key point that “officials here will be investigating whether the gunmen had links to Jihadi groups amid reports he had pledged allegiance to ISIS before the attacks.”

A partial transcript of the segment from ABC’s World News Tonight with David Muir on February 16 is below.

DAVID MUIR: Overseas tonight to Denmark and a new development there this evening. Officials believe this man, 22 years old, was released from jail just weeks ago and they believe he was the gunman behind those horrific attacks over the weekend. Tonight, thousands gathering to mourn the victims, amid those flowers, the message, not afraid. 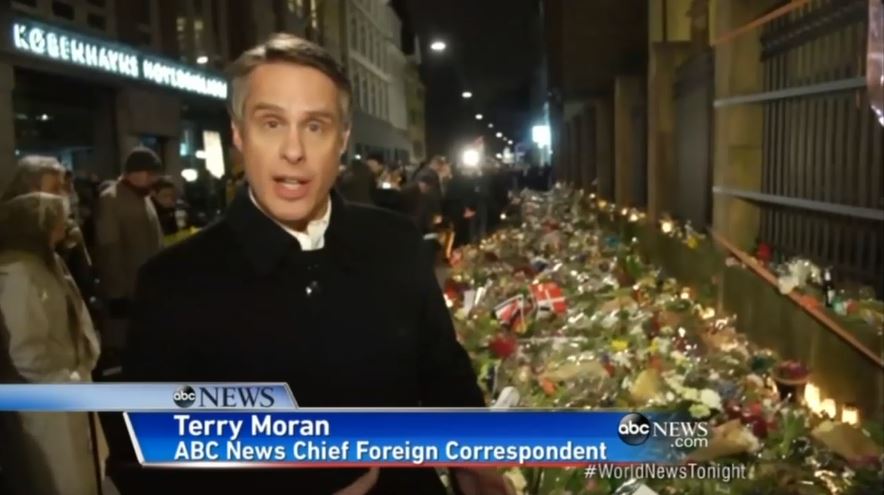 TERRY MORAN: Tonight, we've learned this is the man authorities believe is the gunman in this terror spree. 22-year-old Omar el-Hussein. Danish-born, a kickboxer and gang member, just released from prison two weeks ago for a 2013 knife attack on the subway. They say he launched the deadliest attack in Denmark in decades.

MORAN: Tonight, as Copenhagen mourns, police are confirming two arrests in the case, alleged accomplices, and investigators are asking, was el-Hussein radicalized in prison or online or was this terror purely home grown.

The transcript of the brief that aired on the CBS Evening News with Scott Pelley on February 16 is transcribed below.

SCOTT PELLEY: Tonight, the Associated Press is reporting that the man behind the deadly attacks in Denmark were released from jail just two weeks ago and may have been influenced by Islamic radicals while behind bars. Two people were shot to death. The police later shot and killed the gunman. Tonight, in Copenhagen, tens of thousands attended a candlelight vigil for the victims.

The relevant portions of the segment from February 16's NBC Nightly News are transcribed below. 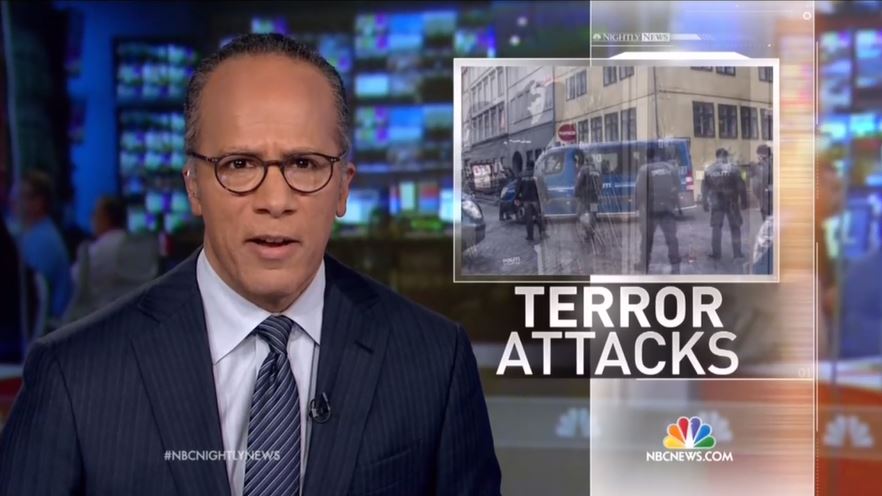 LESTER HOLT: In Denmark tonight, two men are under arrest suspected of aiding the gunmen in a pair of deadly terrorist shootings over the weekend and we're learning more about that man who carried out the worst terrorist violence in that country in decades.

KEIR SIMMONS: The shooter is said to be this man, Omar el-Hussein, 22, reportedly released from prison just two weeks ago. 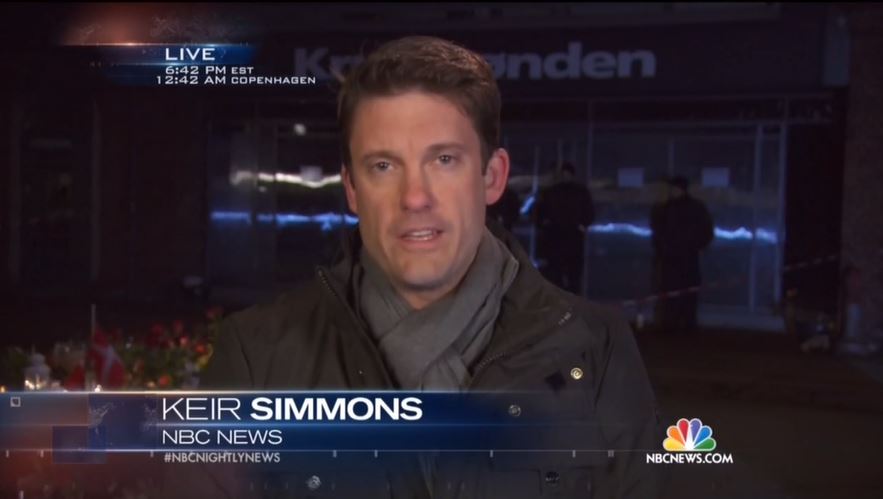 SIMMONS: But anti-Semitism in Europe is on the rise. This weekend, a Jewish cemetery in France was desecrated. Israel's Prime Minister Netanyahu has called on European Jews to immigrate to Israel. European leaders oppose that and in Copenhagen, grief and anger are tempered by tolerance.

SIMMONS: And, Lester, those two alleged accomplices appeared in court today charged with helping the gunmen hide the weapon after the attacks. Officials here will be investigating whether the gunmen had links to Jihadi groups amid reports he had pledged allegiance to ISIS before the attacks.