Update, 02/16, 8:50 p.m. Eastern: In the time span prior to Thursday evening, there was one additional story that aired on the networks regarding Kitzhaber in the form of a 22-second news brief on February 12's CBS This Morning. NewsBusters regrets the error, and the relevant portions story are amended below.

Update, 02/13, 3:57 p.m. Eastern: Oregon Governor John Kitzhaber (D) announced his resignation Friday afternoon and will be effective next Wednesday (February 18). His resignation follows a chorus of calls to do so that ranged from state officials to local and state press outlets. As per the state’s line of succession, Secretary of State Kate Brown (D) will succeed Kitzhaber (as Oregon is one of five states without a lieutenant governor).

Now that the news is official with Kitzhaber railing against the media in a statement for making him into someone “charged, tried, convicted and sentenced” in the public square and his allies for “accept[ing] this judgment at its face value,” we will find out soon enough whether the networks will acknowledge this scandal on their Friday evening newscasts or at any point over the next few days.

On Thursday, the numerous calls for the scandal-ridden and liberal Democratic Governor John Kitzhaber to resign grew even louder as the State Treasurer and top leaders in the Democratically-controlled legislature urged Kitzhaber to leave amid numerous investigations into both he and his fiancé, who had received paid state contracts while living in the governor’s mansion and inability to report over $100,000 on her tax returns.

With the Secretary of State referring to the Governor’s behavior Thursday as “strange” and “bizarre,” one would think that the media would devote time to a story that has dominated the Beaver State and could lead to a longtime Governor leaving office in disgrace.

Alas, the networks refused to cover it on both their Thursday evening and Friday morning broadcasts. The omission is arguably surprising, considering that reliably liberal oulets in MSNBC’s The Rachel Maddow Show and The New York Times have recently reported on it.

In fact, since serious questions began emerging about the behavior of Kitzhaber and his fiancé, Cylvia Hayes, prior to his reelection to a fourth term in November, the networks filed only two stories on the duo which appeared back on October 15 during NBC’s Today show and on Thursday's CBS This Morning.

While it can be argued that the no coverage can be blamed on an East Coast bias that the New York-centric networks may have, the bigger question that needs to be asked is this: Would the story be the same if a Republican Governor was facing calls for resignation from a Republican-dominated legislature?

In fact, one comparison can be made between Kitzhaber and Chris Christie. When the Bridgegate scandal broke in January 2014, the networks devoted a whopping 88 minutes of coverage between January 8 and the morning of January 10 of that year regarding allegations that surrounded the Republican New Jersey Governor. That stands in contrast to the two-minute-and-25-second Today segment on Kitzhaber from October and the 22-second brief during Thursday's CBS This Morning.

Over on the top three morning cable shows, only MSNBC’s Morning Joe mentioned the story by devoting roughly four minutes to the scandal that even has many of the predictably state’s liberal newspapers leading the requests for his resignation, including The Oregonian.

As the Morning Joe crew discussed, Kitzhaber contacted the Secretary of State and had her fly home from a conference in Washington D.C. to what co-host Mika Brzezinski noted was “ostensibly to tell her he was resigning and that she would replace him on the state's succession plan, but when she returned on Wednesday, he informed her that he was actually going to say in office.”

The Washington Post’s Reid Wilson also pointed out to the show’s panelists that Kitzhaber has “lost the support of the state Democrats,” “the media,” and “always had a really prickly relationship with other members of the political class down there and, hey, the moment that he needed their support, they all abandoned him.”

Wilson admitted that the indications Kitzhaber would resign followed by his insistence that he would stay in office was “one of the aggressive and strange, and sort of shocking statements I've seen in politics.”

The relevant portions of the transcript from MSNBC’s Morning Joe on February 13 are transcribed below. 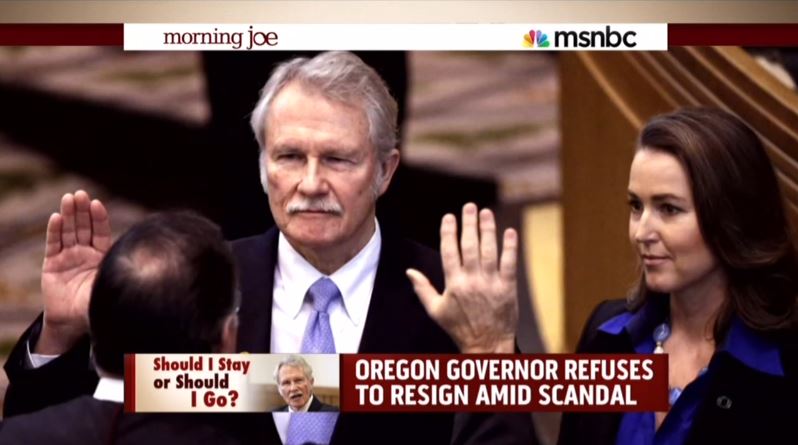 [ON-SCREEN HEADLINE: Should I Stay or Should I Go?; Change of Heart?; Oregon Gov. Resists Resignation]

BRZEZINSKI: The Governor's fiancé, Cylvia Hayes, is accused of using her influence to get consulting work on clean energy projects while living with the Governor. On Tuesday, the Governor recalled his Secretary of State, who was in Washington, ostensibly to tell her he was resigning and that she would replace him on the state's succession plan, but when she returned on Wednesday, he informed her that he was actually going to say in office.

BRZEZINSKI: The state's top Democrats say they were led to believe he would step down and AP reports Kitzhaber told aides he was going to resign, but changed his mind while Brown was returning to Oregon. So, joining us now staff writer at The Washington Post, Reid Wilson. Reed, what the – what the –

WASHINGTON POST ‘s REID WILSON: You know, it's funny this is happening in Oregon, which has fewer public corruption convictions and case than just about any other state in the country, but what's happened here is that the First Lady has been involved in private business for a very long time. She's a public policy consultant and she's been consulting on state business from the Mahonia Hall, which is what they call the governor's mansion out there. She’s been hosting meetings at the governor's mansion both with her own clients and with state officials, mixing the two and not necessarily reporting all of her income on IRS forms, so this is a –

WILLIE GEIST: It is. Reid, I don't know how he survives this. Is there a way out of it? Two recall petitions. Every newspaper in the state, effectively, is calling for his resignation. The Attorney General in Oregon now opening a criminal investigation, that was announced on Monday, I think. Is there any way he survives? 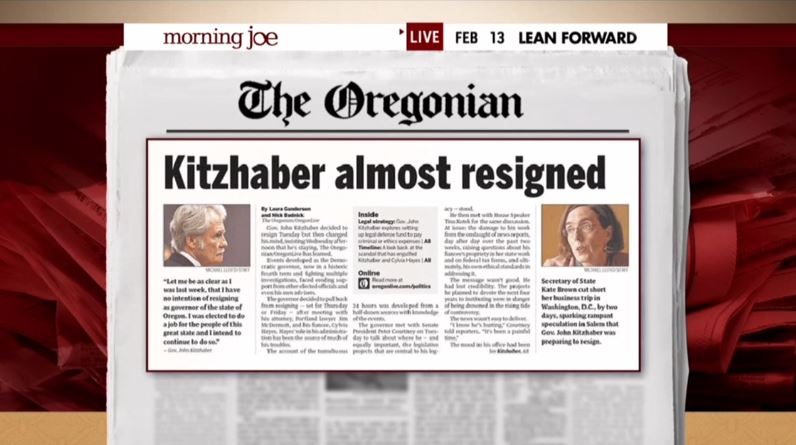 WILSON: Add in an FBI investigation, too, which has been going on for more than a month now.

SCARBOROUGH: [LAUGHTER] Is that bad?

WILSON: He's lost the support of the state Democrats. He’s lost the support of the media. He's always had a really prickly relationship with other members of the political class down there and, hey, the moment that he needed their support, they all abandoned him. So, you've seen the State Treasurer call for his resignation, the Secretary of State pretty much called for his resignation and, Joe, you mentioned that statement, I mean, that was one of the aggressive and strange, and sort of shocking statements I've seen in politics.