After making no mention of it on Wednesday evening or Thursday morning, NBC continued its streak, on Thursday's NBC Nightly News, of ignoring the militant atheism and liberalism of the North Carolina man accused of killing three Muslim-Americans.

While none of the three networks have alluded to Craig Stepehn Hicks’s liberal beliefs, what differed from each of the past two network news cycles was that CBS dropped any mention of Hicks’s atheism after correspondent Vicente Arenas had included it in reports on Wednesday’s CBS Evening News with Scott Pelley and Thursday’s CBS This Morning.

Over ABC, however, World News Tonight with David Muir did highlight Hicks’s atheism after having brought it up both the night before and on Thursday’s Good Morning America.

Correspondent Tom Llamas reported from Chapel Hill that Hicks' wife said “this may have started because of a dispute between her husband and the alleged victims over a parking space at the apartment complex.”

While it may have been the case, Llamas also made brought up Hicks’s atheism (even though it was only a brief mention: “But Hicks, who is being held without bond, openly posted on Facebook his proposed solution to the problems in the Middle East: atheism.”

On NBC Nightly News, interim anchor Lester Holt read a brief on the matter that, in part, brought up how the “father of two of the victims continued his call today for authorities to investigate their deaths as a potential hate crime” and that: “Islamic leaders also express concern about growing anti-Islamic sentiment in the U.S. They called on President Obama to address it. Investigators say their initial findings do not indicate a hate crime in this case.”

During his report on the CBS Evening News, Arenas stated at one point how “[t]he murders have exposed a feeling among some Muslims that they are facing racial intolerance” and then played a soundbite from a representative with the American Muslims for Palestine.

Relevant portions of the transcript from ABC’s World News Tonight with David Muir on February 12 can be found below. 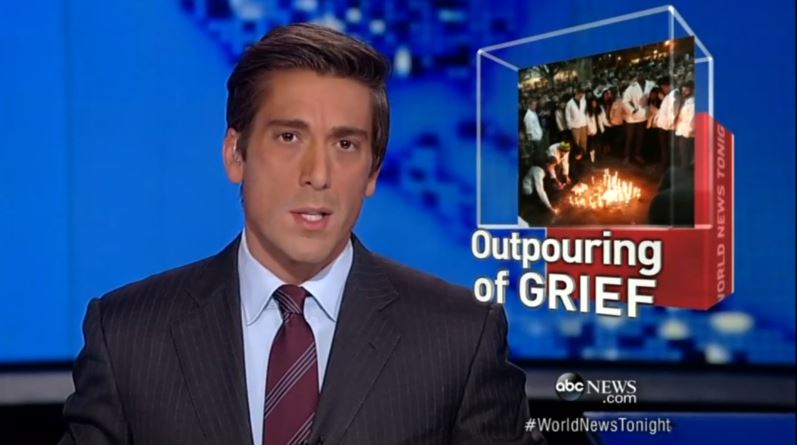 MUIR: Tonight, in Chapel Hill, North Carolina, three members of a young Muslim family gunned down by a neighbor are being remembered. More than 5,000 at the funeral today. Too many for the mosque, moved to a nearby field. So many offering their prayers.

Tonight, the FBI is helping with the case, opening their own inquiry. The families – the victim's family, I should say, calling on the President and telling Americans, this was a hate crime. ABC's Tom Llamas in North Carolina again tonight.

TOM LLAMAS: The family telling ABC News, they were each shot in the head. Hicks' wife saying this may have started because of a dispute between her husband and the alleged victims over a parking space at the apartment complex. 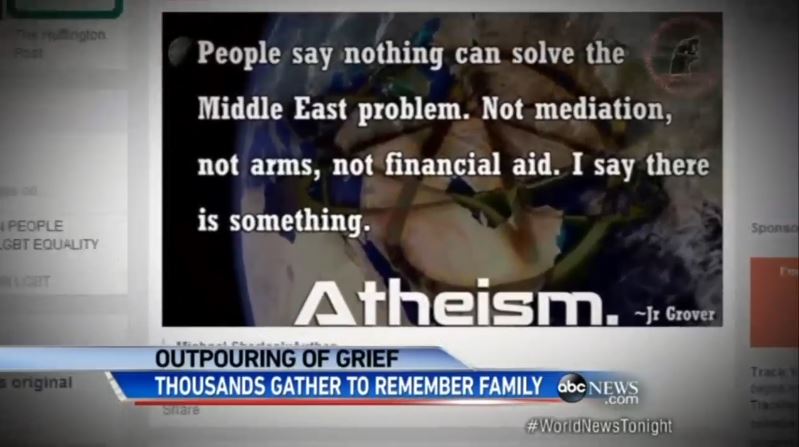 LLAMAS: But Hicks, who is being held without bond, openly posted on Facebook his proposed solution to the problems in the Middle East: atheism. CAIR, the Council on American-Islamic Relations, drafting a letter with other groups, calling for a federal hate crimes investigation. A sentiment echoed all over social media. The hashtags #MuslimLivesMatter and #ChapelHillShooting trending all over the world on Twitter and Facebook.