Ahead of President Obama’s State of the Union address on Tuesday, the networks offered previews of his speech during their Monday evening newscasts with ABC and NBC working particularly hard to paint a rosy picture for Obama with rising poll numbers and having “redefined” the “model of how to sell the State of the Union.”

ABC’s World News Tonight with David Muir began hyping the President’s upcoming speech by following their morning counterpart in promoting the latest ABC News/Washington Post poll that shows Obama’s approval rating at 50 percent and suggesting they are due to lower gas prices and an improved economy (in contrast to their coverage when his numbers were lower).

With an on-screen headline that read “[t]he Comeback; President’s Approval Ratings Soars,” chief White House correspondent Jonathan Karl stated that “the economic resurgence is real and if you look at our poll, Americans are starting to feel it.”

Karl also gushed that “the President is going to play a little Robin Hood” in that “[h]e's going to propose tax hikes on the rich” to provide “[h]elp for the poor and middle class.” While he mentioned that none of his proposals were likely to pass Congress, none of his initiatives were described as liberal or progressive.

On NBC Nightly News, senior White House correspondent Chris Jansing offered a similar pro-Obama infomercial regarding his speech without a single soundbite of criticism or price tag for Obama’s many programs that he has already unveiled. Jansing hailed Tuesday’s speech as the “finale of a redefined model of how to sell the State of the Union.”

While “the average household is making about $2,000 less than it was” before the recession, Jansing shrugged off that plus Republicans as presenting “a tricky balance for the President and his speechwriter, facing an uphill battle to persuade a skeptical audience with an hour-long speech.”

Only at the conclusion of her segment did Jansing mention Republican criticism of the President’s new policies, but lasted for only one sentence. Right after that, she fretted how “in spite of a new strategy, the political battles are familiar” between the two sides.

Unlike both the segments on ABC and NBC, the CBS Evening News with Scott Pelley offered at least some sort of opposing viewpoint as well as a price tag for Obama’s wish list of liberal policies.

During his report, chief White House correspondent Major Garrett was able to include both a quote from Republican Senator Marco Rubio (Fla.) denouncing the President’s tax hikes in addition to dollar amounts for his community college program ($60 billion) and tax increases on the wealthy ($320 billion).

As the Media Research Center’s Rich Noyes documented on Monday, the networks have gone out of their way to praise and become enthralled with Obama’s State of the Union speeches in each of his first six full years in office. Needless to say, it’s safe to say that the same can be expected on Tuesday night.

The relevant portions of the transcript from ABC’s World News Tonight with David Muir on January 19 can be found below. 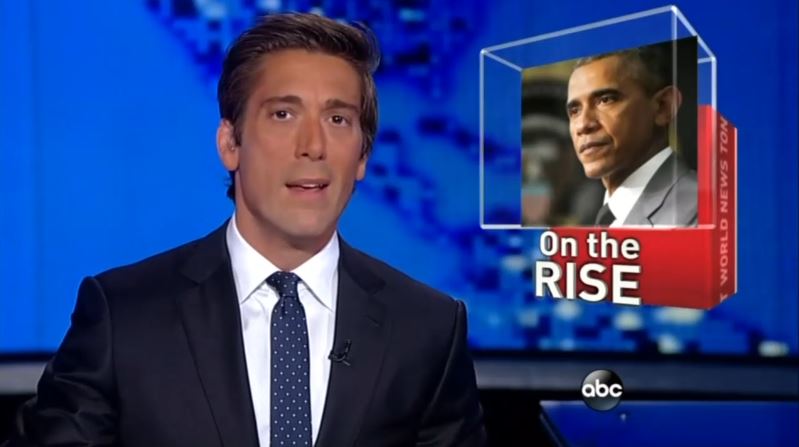 [ON-SCREEN HEADLINE CAPTION: On the Rise]

DAVID MUIR: Now, to another number tonight and many wondering if the two are related. The new approval ratings for President Obama on the eve of the State of the Union. Perhaps you'll remember, in the days before the mid-term elections, just this November, Republicans taking control of the Senate. The President had a 44 percent approval rating. It had been even lower. Tonight, that number up to 50 percent. I want to bring in ABC's chief White House correspondent Jonathan Karl and, Jon, is there any question these gas prices and the economy are playing right into this? 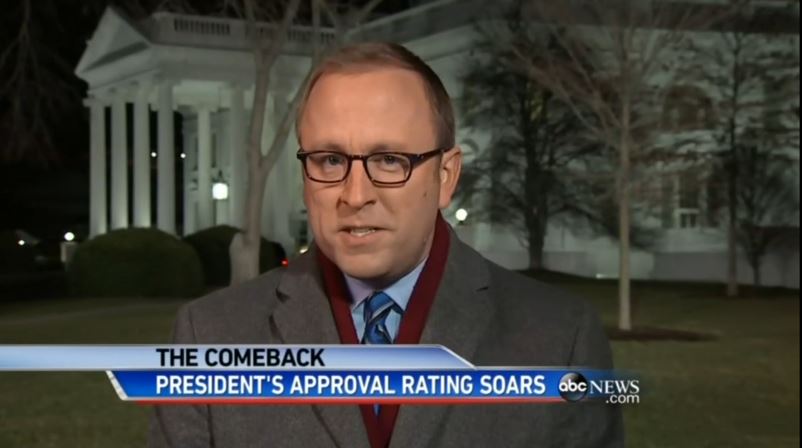 JONATHAN KARL: There's no doubt that is what's driving this. Gas prices low, the unemployment rate low. The President's message in the State of the Union will be America is back.

The economic resurgence is real and if you look at our poll, Americans are starting to feel it. Look. 41 percent believe the economy is excellent or good. That is a big change from just three months ago when it was just 27 percent, but David, tomorrow in that big speech, the President is going to play a little Robin Hood. He's going to propose tax hikes on the rich. Help for the poor and middle class. Those programs don't have much of a chance of passing, but it's a recognition that while the economy is growing, so is that gap between rich and poor.

The full transcript of the segment that aired on NBC Nightly News on January 19 can be found below. 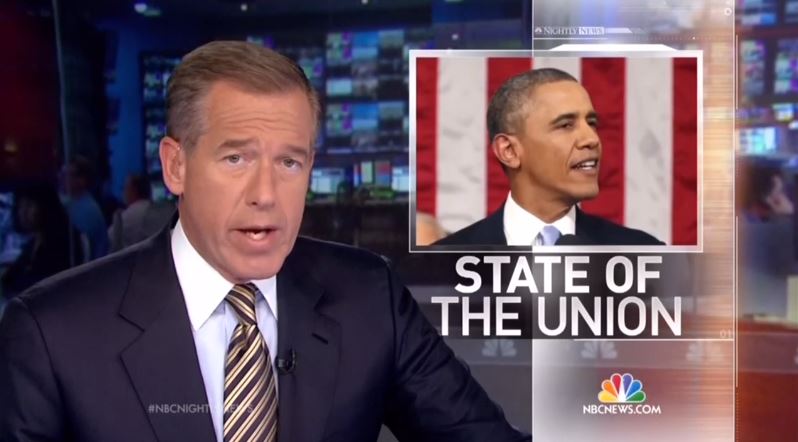 BRIAN WILLIAMS: Now to the looming showdown over money and taxes that will have affect just about every American family. 24 hours from now, give or take, the President will deliver his second to last State of the Union address, setting up a battle for the direction of the country in the final two years of his presidency. We get our preview tonight from senior White House correspondent Chris Jansing.

CHRIS JANSING: When President Obama makes his way into the House chamber tomorrow, he'll make the case that the American economic comeback is real and there is good news. Compared to when the President took office, the unemployment rate has dropped significantly, the stock market has jumped almost 10,000 points and consumer confidence is far stronger than in 2009, but what still has many Americans nervous and Republicans critical, the average household is making about $2,000 less than it was. It poses a tricky balance for the President and his speech writer, facing an uphill battle to persuade a skeptical audience with an hour-long speech.

STU ROTHENBERG: It's a Hail Mary in that it’s an attempt to make something relevant that is increasingly irrelevant.

JANSING: 67 million Americans watched Bill Clinton's State of the Union in 1993, half that many tuned in last year. Tomorrow, the President's speech will be a finale of a re-defined model of how to sell the State of the Union. For weeks, he's previewed the address, traveling the country to roll out plans from expanded home ownership to free community college tuition and beefed up cyber security, paid sick leave, more broadband access, and just this weekend, a proposed tax increase for wealthy Americans and cuts for the middle class. All of it hyped on social media. 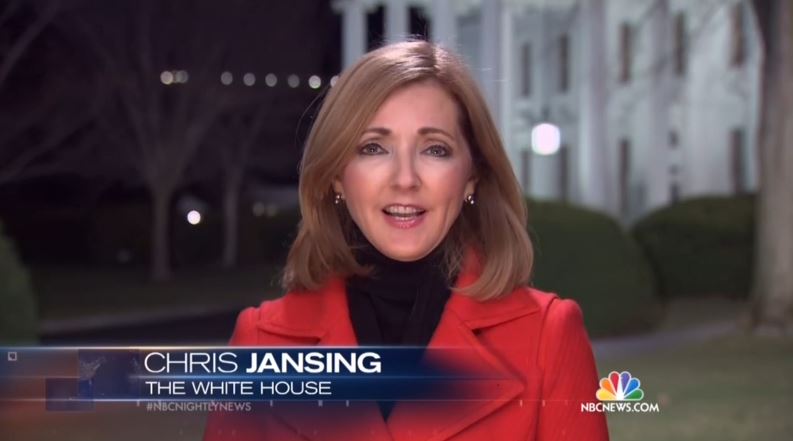 PRESIDENT BARACK OBAMA [in whitehouse.gov video]: But you never get completely used to it. There’s a certain pageantry to it.

JANSING: Republicans say it's the same old message in a different package, designed to build President Obama's legacy and doing nothing for the middle class. So in spite of a new strategy, the political battles are familiar and so is one tried and true tactic. Up in the gallery, the First Lady will be surrounded tomorrow night by a cross section of 22 Americans to help the President make his point.

The relevant portion of the transcript from the CBS Evening News with Scott Pelley on January 19 is transcribed below.

[ON-SCREEN HEADLINE CAPTION: State of the Union 2015; Previewing the Speech] 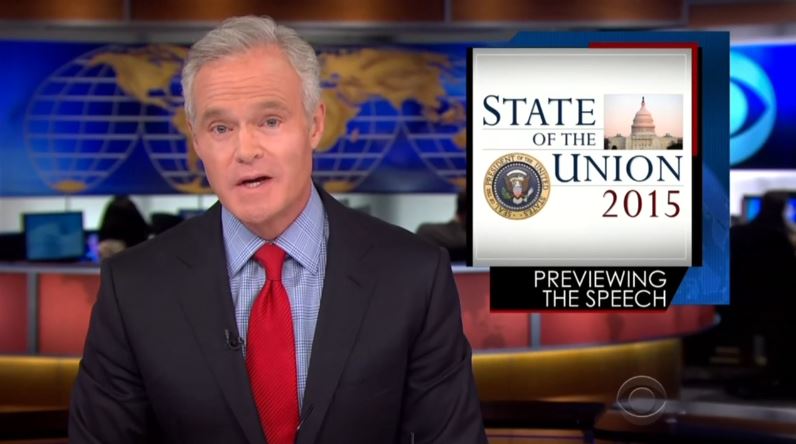 SCOTT PELLEY: The Vice President will be sitting right behind the President tomorrow when Mr. Obama delivers his State of the Union address and if there are any surprises, well, that will be a surprise because the White House has taken the unusual step of rolling out the President's ideas in advance. Here's chief White House correspondent Major Garrett.

MAJOR GARRETT: Over the weekend, the White House proposed $320 billion in new tax, achieved by raising the tax rate by investments for the top 1% of earners and closing inheritance loopholes for the wealthy. The White House says the new tax revenue would pay for all the President's new spending plans. Among them, free tuition for community college students, who maintain a 2.5 grade point average. Total cost, $60 billion.

PRESIDENT BARACK OBAMA: The doors of higher education shouldn't be a democratic issue or a Republican issue. This is an American issue.

GARRETT In the run-up to tomorrow's speech, the President has called for six weeks of paid family leave for federal workers, reductions to federal mortgage insurance fees, new subsidies for rural broadband access and a new push for consumer cyber-security connections.

OBAMA: If we're going to be connected, then we need to be protected. As Americans, we shouldn't have to forfeit our basic privacy when we go online to do our business. 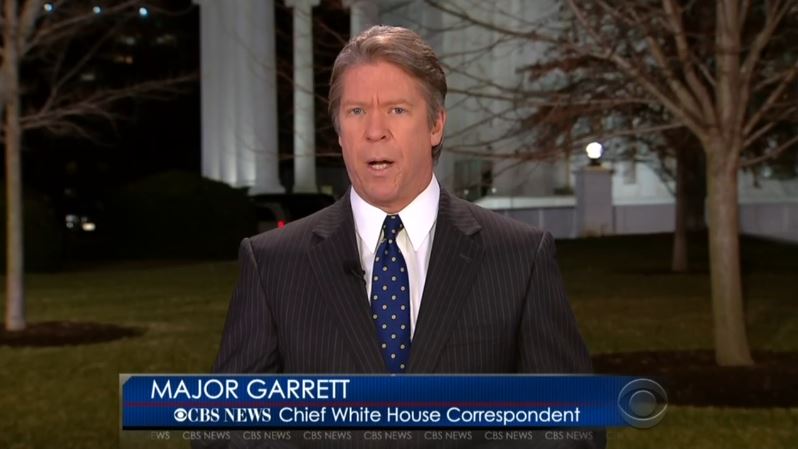 GARRETT: The White House unveiled these proposals in hopes of overshadowing the new Republican Congress and conveying some sense of policy and political momentum. Scott, Republicans say they're still waiting for what they describe as serious ideas and signs of cooperation from the White House on trade, tax reform and energy.