Between Monday night and Tuesday morning, the “big three” of ABC, CBS, and NBC covered the news that a golf outing by President Obama at a course in Hawaii forced a Army to move their wedding location after planning to have it on the 16th tee.

While they covered the news, each network made sure their were plenty of laughs and golf-related puns throughout their 12 minutes and 4 seconds of coverage that included “golf diplomacy,” “no one was teed off,” and “the golf club owner really missed the fairway.” [MP3 audio here; Video below]

On Tuesday’s CBS This Morning, substitute co-host Vinita Nair said in two teases to the program’s segment on the wedding that “we’ll show you President Obama’s course correction after he bogeyed a couple’s dream wedding” and how Obama’s “golf game almost forced their wedding into the bunker.”

Following CBS News national correspondent Chip Reid’s story, co-host Norah O’Donnell stated that it was “fair to say the couple was not teed off” and was followed by Glor joking: “No, the golf club owner really missed the fairway. He wants a mulligan.”

Glor seconds later concluded that the Army couple’s original plans were “trapped in the sand.”

Over on NBC’s Today, the hosts gushed that, while the couple’s plans had to change, it ended with an “unforgettable” and “very memorable” phone call from the President during which he apologized for the situation.

NBC News senior White House correspondent Chris Jansing reported that the newlywed’s “Commander-in-Chief phoned in some golf course diplomacy to make sure no one was teed off.”

To her credit, she noted that the couple had “no hard feelings” about what happened and this was not the first time Obama’s persistent golfing has made headlines. She brought up how the President went golfing right after making a statement about the murder of American James Foley by the terrorist group ISIS.

After her story, co-host Willie Geist jokingly suggested that the President should go on the their wedding registry and make sure to “get them the blender” while Savannah Guthrie said he should given them “salt and pepper shakers.”

ABC’s Good Morning America, the co-hosts shared some laughs following a brief from fill-in newsreader Ryan Smith. Smith sarcastically put forth the idea that, since the couple had not yet decided on an official honeymoon, they should be allowed to spend it in Washington and stay at the White House.

While the jokes were flowing freely on the morning shows, it’s doubtful that the laughs and smiles would be the same from the broadcast networks if it had involved George W. Bush when he was President (or any Republican President for that matter).

The relevant portions of the transcript from CBS This Morning on December 30 can be found below. 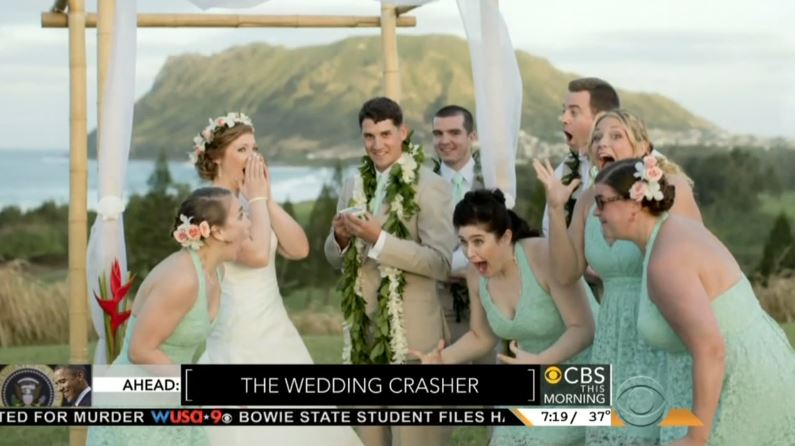 VINITA NAIR: Ahead on CBS This Morning –  the round of golf that left the commander in chief feeling terrible. We'll show you President Obama’s course correction after he bogeyed a couple’s dream wedding? [TO CO-HOSTS] Can you guys think of some more there?

JEFF GLOR: That was quite a few. Impressive.

NAIR: Up next, President Obama forces a mulligan on a couple's wedding plans.....His phone call to the bride and groom after a presidential golf game almost forced their wedding into the bunker. [TO CO-HOSTS] That’s two more. 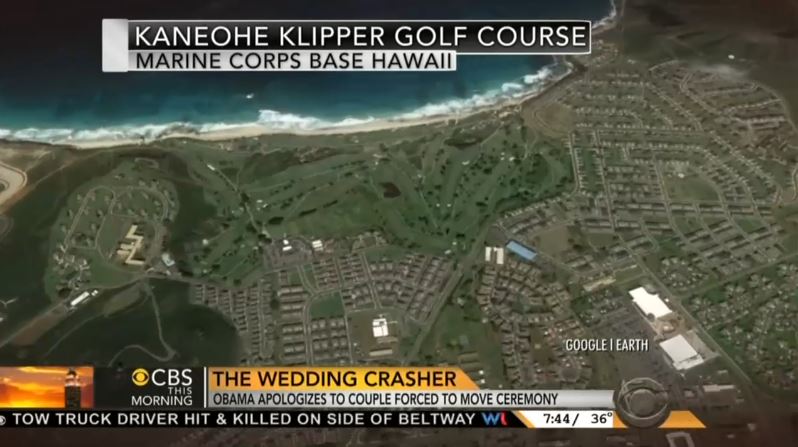 NAIR: This morning, some newlyweds say they have no hard feelings toward the President after his golf game at a military course in Hawaii forced them to change their wedding plans. Chip Reid shows us the round of golf that nearly left the bride and groom in the rough.

CHIP REID: There have been some missed presidential putts this vacation, but there have also been some crowd-pleasing victory, like a par last evening on the 18th hole.

REID: This past weekend, though, he flirted with trouble when he decided to play on a scenic course at a military base. The problem, a wedding of two Army captains, Natalie Heimel and Edward Mallue was scheduled at the same time, on the 16th tee. The manager of the golf course, without informing the White House of the conflict, asked the couple if they would mind relocating to a lawn near the base commander’s home, on a hilltop with a commanding view of the ocean. Fortunately, they said they had no problem with the change and were happy their Commander-in-Chief would not be disrupted, according to a spokesperson at the base. When President Obama was later informed of what had happened, he, quote, “felt bad,” according to a source familiar with the situation. So, catching the couple by surprise, he called them right after they took their vows and apologized. 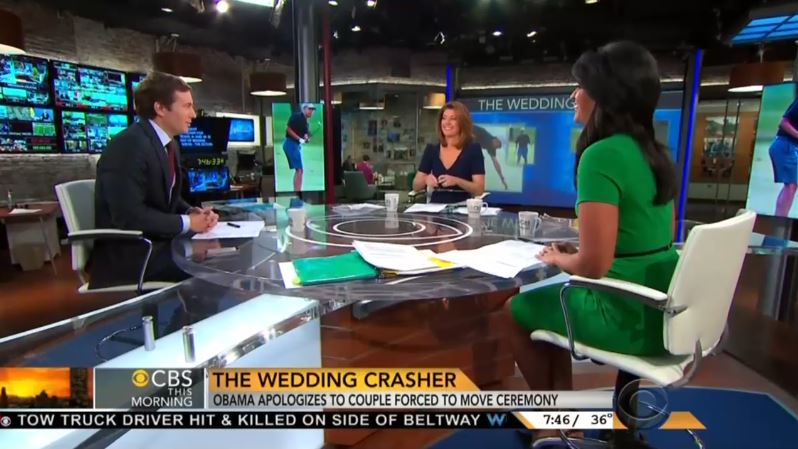 NORAH O’DONNELL: Wow. Well, apparently, the couple got to go in front of the commander’s house, which is an even better view than the 16th hole, so everything turned out nicely. They had nice pictures and I guess it’s fair to say the couple was not teed off.

GLOR: No, the golf club owner really missed the fairway. He wants a mulligan.

NAIR: I can't. I really can’t with you today.

O’DONNELL: As I said on the Evening News last night, you know, golf, some people say, is a good walk spoiled. In this case, it might have been a wedding spoiled.

GLOR: It’s trapped in the sand.

The relevant portions of the transcript from NBC’s Today on December 30 can be found below. 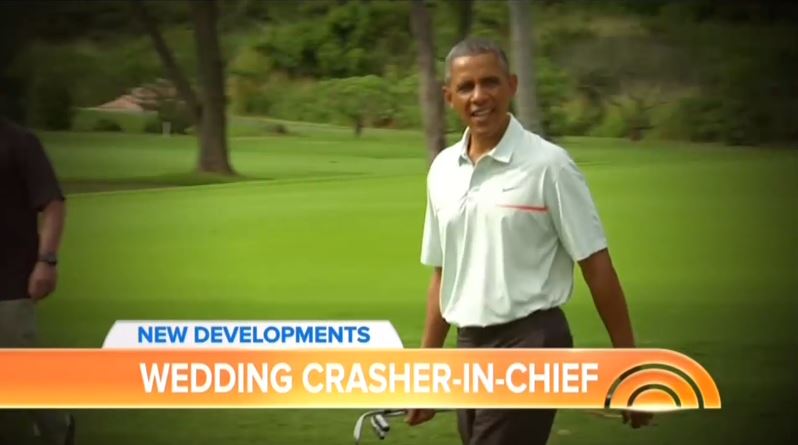 SAVANNAH GUTHRIE: Wedding crasher in chief. Two soldiers forced to move their wedding on a Hawaiian golf course so the President could tee off, leading to this unforgettable phone call.

WILLIE GEIST: Two American soldiers who tied the knot in Hawaii now have quite a story to tell as President Obama's golf outing forced them to scramble to move their wedding. On the upside, it did lead to a very memorable phone call. NBC’s senior White House correspondent Chris Jansing is in Hawaii and talked to the couple exclusively. Chris, good morning.

CHRIS JANSING: Good morning Willie.. The golf course President Obama plays the most when he is in Hawaii and they always warn people planning events when he's in town, expect last-minute schedule changes, but neither the President nor two U.S. Army captains who got married there Sunday expected that the Commander-in-Chief might become their wedding crasher. Newlyweds Ed and Natalie didn't mind when his cell phone rang right after their I do’s.

JANSING: Both Army captains, their Commander-in-Chief phoned in some golf course diplomacy to make sure no one was teed off. 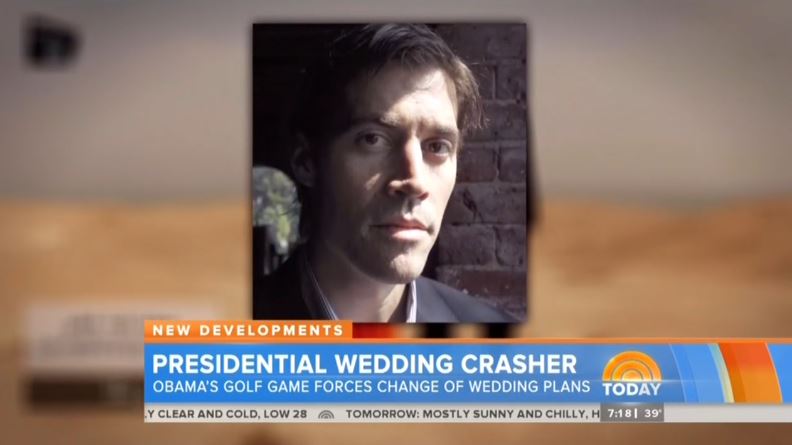 JANSING: The new location, right above the old one, but the headlines weren't good for White House and it's not the first time that Obama's love of golf has provoked critics. He admitted his mistake after hitting the links following ISIS’s execution and of Ameircan hostage James Foley, but Ed and Natalie say this is no controversy. This photo tells the story of a uniquely memorable wedding.

WEDDING PHOTOGRAPHER KEAO SUNAOKA: Unbelievably shocked and awed. It was an incredible moment

GUTHRIE: Or the salt and pepper shakers.

The relevant portions of the transcript from ABC’s Good Morning America on December 30 can be found below. 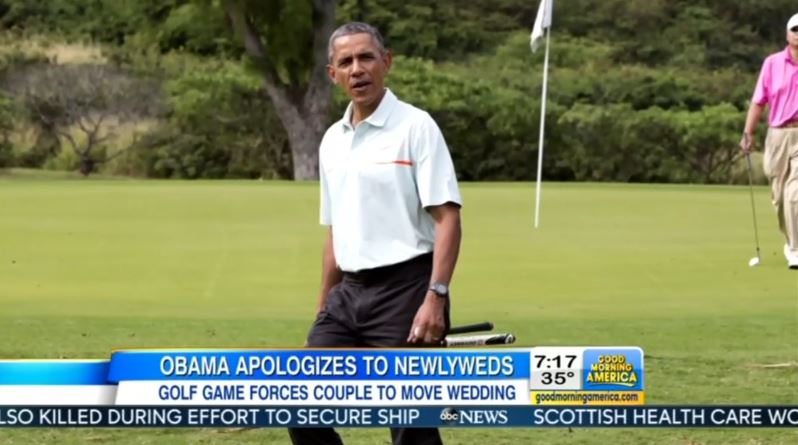 RYAN SMITH: And finally, a young couple got the surprise of their lives on their wedding day in Hawaii.

They were forced to relocate their ceremony on a golf course because President Obama had scheduled a tee time at the same location. So when the President found out, he called the couple, two Army captains and he apologized.

SMITH: Oh, the couple invited the President to their reception and mentioned there would be an open bar. Right? He politely declined, I should say. He asked where they were going on their honeymoon since they were already stationed in Hawaii, that’s kind of hard to beat, but they haven’t decided yet. I’m thinking maybe the White House? Maybe stay there?