During a discussion on MSNBC’s The Cycle about the disparaging comments ObamaCare architect Jonathan Gruber made about the law’s passage and the “stupidity” of voters, New York Times writer and substitute Cycle co-host Josh Barro sought to defend him by blasting the expectations that Americans have about health care as “completely incoherent” and lying was the only solution to make them happy.

Barro told fellow panelists and guest Lauren Fox of National Journal that “what drives me crazy about this story” was that: “Jonathan Gruber was right. Public opinion on health care policy is just completely incoherent.” [MP3 audio here; Video below]

From there, he expanded on what he viewed as unreasonable expectations the public places on politicians and policymakers when it comes to health care:

People think we ought to have health care plans that are cheap, that provide high quality coverage to everyone, that everyone should see whatever doctor they want, they don't want their premiums to go up, they don’t want to pay for anything through taxes. Well, what people want is impossible and it's like with the budget, people say, we hate budget deficits, we hate tax increases and you ask them about any programs, they don't want to cut any programs.

Thus, Barro continued the desperate spin of defending Gruber by opining that it is indeed “the public” that “puts politicians in a position where the only thing they can do to make the public happy is lie and so, people lied.”

Earlier in the segment, co-host Krystal Ball fretted about the possibility of congressional hearings being held on what Gruber said during his series of videos:

If you’re a member of Republican leadership who is actually looking to move the party to some sort of governing agenda, you have to be very dismayed by the idea of endless hearings over what Jonathan Gruber may or may not have said and what it may or may not have meant.

Substitute co-host Luke Russert also chimed in at the segment’s conclusion to add that, while ObamaCare “was sure a part of negative ads” during the 2014 midterms, he saw it as having “really played no role in them as it did in 2012 and 2010.”

The complete transcript of the segment that aired on MSNBC’s The Cycle on November 12 is transcribed below. 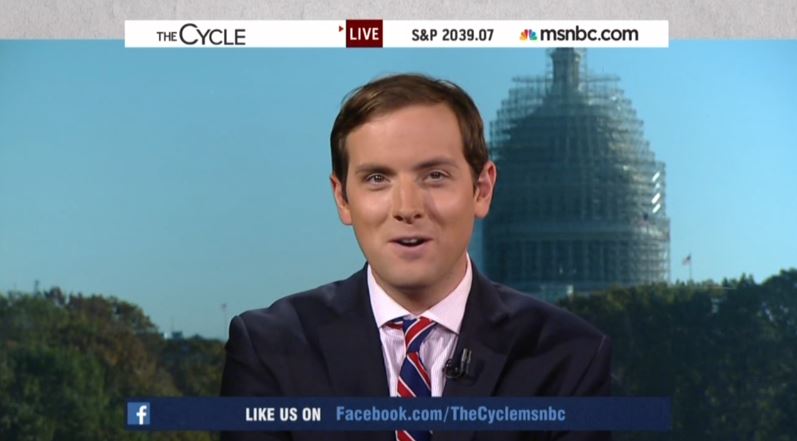 LUKE RUSSERT: Speaking of out there, what in the world was ObamaCare architect John Gruber thinking? Controversial new video has blown up online in the past 24 hours. It shows the M.I.T. Professor and key adviser on the health care law at a conference last year speaking candidly about how Dems got the law passed.

JONATHAN GRUBER: Lack of transparency is a huge political advantage and basically, you know, call it the stupidity of the American voter or whatever, but basically that was really, really, critical to get it to pass and really, you know, it's the second best argument. Look, I wish Mark’s right, we could all make if transparent, but I would rather have it law than not. So, it’s kind of like his reporter story. There are things I wish I would change but I would rather have this law than not.

RUSSERT: ‘You got it, you like it, you keep it, not so much,’ probably what he was alluding to right there. He also called voters stupid, not the smartest move. Unsurprisingly, Gruber was in damage control mode yesterday when he talked with MSNBC's very own Ronan Farrow in an interview that’s getting plenty of attention.

GRUBER: The comments in the video were made at an academic conference, I was speaking – speaking off the cuff – and I basically spoke inappropriately and I regret having made those comments. Public policy that involves spending is typically less politically palatable than policy that involves doing things with the tax code. It would have made more sense to do Obamacare the way we did Massachusetts, which would be to actually give people money to offset the cost of their health insurance. That was politically infeasible, so instead it was done through the tax code and that's the only point I was making. 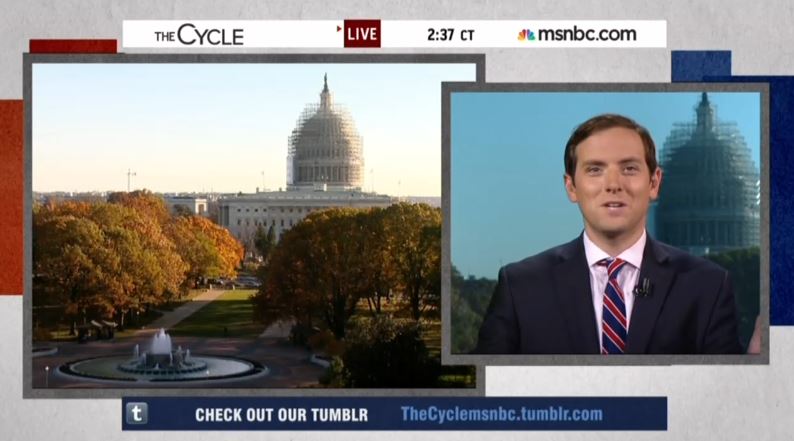 RUSSERT: ‘I was just speaking off the cuff in a room full of my own friends.’ Of course, all this comes as open enrollment starts this weekend in a new GOP-led Senate is threatening to dismantle parts of the law. For more, let's bring in Lauren Fox, correspondent at National Journal. Lauren, thanks so much for being on the show.

LAUREN FOX: Thank you for having me.

RUSSERT: So, I've seen it already on the Twitter’s, “Gruber-Gate” it's being called by some out there on the right [KRYSTAL BALL LAUGHING]. From where you sit, where do you see this in terms of how much of an impact it could make in removing – moving forward on the repeal of health care? Is this something that will really galvanize the GOP to say, “this has been a conspiracy since the beginning. We have to repeal it right now.”

FOX: On the Capitol Hill, it is already galvanizing Republicans. We've heard from some House Republicans are interesting in holding some sort of a congressional hearing on the law and I think that there’s definitely a sense from Senate Republicans, who are getting ready to hold the majority in the U.S. Senate, that this kind of is the next – it adds fuel to the fire to help repeal the law, of course, in Congress. Of course, the president is never going to sign something like that, but I think there is – certainly gives momentum to Republicans to move on Capitol Hill.

KRYSTAL BALL: Yeah and to your point, Lauren, Robert Costa of The Washington Post was reporting earlier, we heard Congressman Jim Jordan saying “we may want to have hearings on this.” Jordan, very influential. If you’re a member of Republican leadership who is actually looking to move the party to some sort of governing agenda, you have to be very dismayed by the idea of endless hearings over what Jonathan Gruber may or may not have said and what it may or may not have meant. 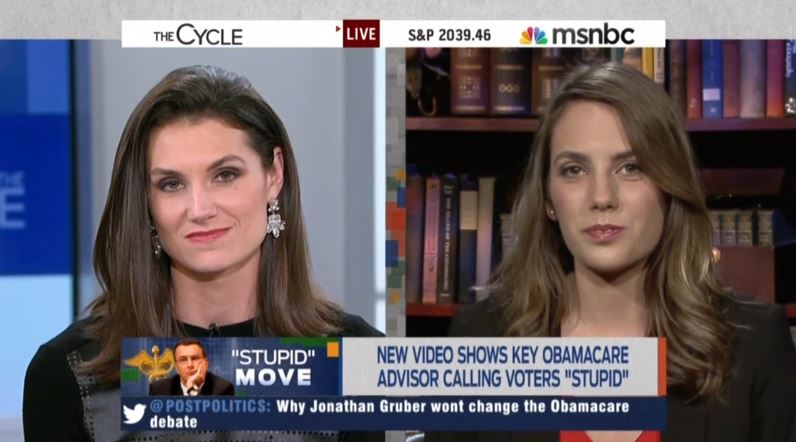 FOX: I certainly think we're seeing this from Senator Mitch McConnell. McConnell has certainly said before that the realistic possibilities of repealing the Affordable Care Act aren't really there, but still he's willing to go through the motions. So, I think even some leaders and senior members of the party still are willing to move forward with this, even though it's certainly a distraction and it could hurt Republicans moving forward.

JOSH BARRO: You know what drives me crazy about this story?

BARRO: People think we ought to have health care plans that are cheap, that provide high quality coverage to everyone, that everyone should see whatever doctor they want, they don't want their premiums to go up, they don’t want to pay for anything through taxes. Well, what people want is impossible and it's like with the budget, people say, we hate budget deficits, we hate tax increases and you ask them about any programs, they don't want to cut any programs.

So, the public puts politicians in a position where the only thing they can do to make the public happy is lie and so, people lied. 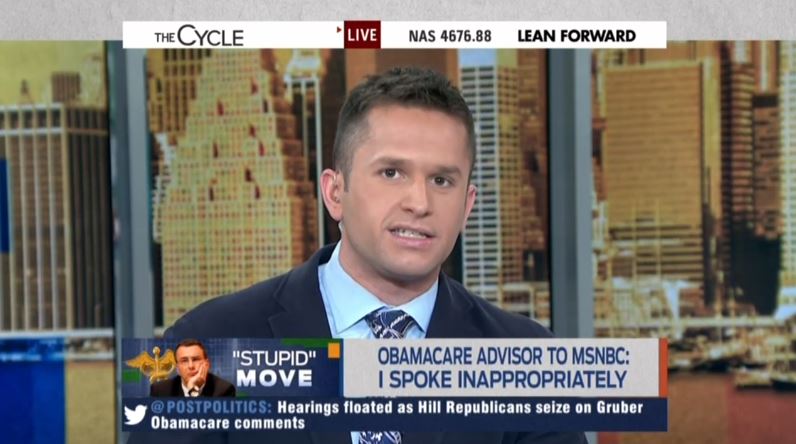 BARRO: The Democrats lied about health care, Republicans lie about health care, Jonathan Gruber and the people who put together Obamacare lie about what the true cost of it is, but really, it’s – Abby, how can we fix this without the public having reasonable expectations?

ABBY HUNTSMAN: Lack of transparency but also making it so incredibly complicated that the politicians don't understand it and voters don't understand it either. This is something, Lauren, Jonathan Gruber was talking to his, as Luke said, his group of buddies, he said, “if you had a law that made it explicit that healthy people are going to pay in and sick people are going to get (subsidies), it would not have passed and to that point, Lauren, not only were Americans not really read in on this legislation, but my guess is the lawmakers didn't read the 2,000-plus pages of legislation on ObamaCare. Had they done that, had they done the research and fully understood what this was about, would the outcome have been different?

FOX: Well, I think that it's always hard to look back on what was going to happen with a law that's already passed, of course. But, you know, this was the President's signature achievement. This was the first thing that Democrats wanted to look for and mark as a President's legacy and I think that what we would have seen from Democrats is that, you know, this was still a law they wanted to pass and this is something that they had been working on for a long period of time and something we should also know, you know, Republican Governor of Massachusetts was able to do in his own state and so I think that it is complicated, but, you know, any law that Congress passes is going to be complicated. I don't think that keeps a government from passing laws.

RUSSERT: What's interesting, Lauren, is that these last midterms, the health care law really played no role in them as it did in 2012 and 2010. It was sure a part of negative ads, but not nearly front and center as it was in the last two cycles. I'm curious as to your opinion, you obviously see the possibility at hearings regarding Mr. Gruber's comments, this idea of the Supreme Court will make a very substantial ruling on the Affordable Care Act, probably some time around June. Could we see 2015 be another year where health care rears its head [BALL OR HUNSTMAN GROANS] after it first came out in 2009 as a very contentious partisan issue for a very long time? 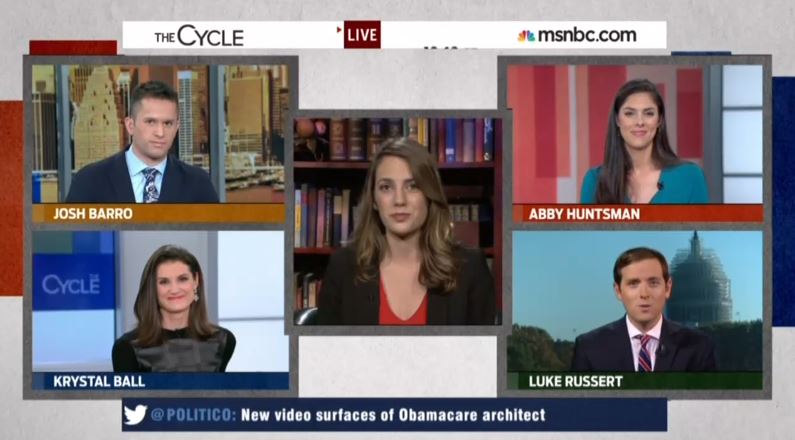 FOX: I think as long as President Obama is in the White House, as long as this law is on the books, it's going to become a contentious issue. Whether or not it's Gruber's comments, whether or not it's the Supreme Court. I think any time that the Affordable Care Act comes up, it's contentious. We know what side of the aisle Republicans are on and we know where Democrats stand.

RUSSERT: Yes, we do, indeed. Lauren Fox from National Journal, thank you so much for being on the show. We appreciate it.