On Wednesday, the results of the St. Louis County autopsy of 18-year-old Michael Brown, who died after being shot by Ferguson, Missouri police officer Darren Wilson on August 9, were leaked to the St. Louis Post-Dispatch newspaper and largely supports Wilson’s claims that he had a physical altercation with Brown inside his police SUV.

When it came to the major broadcast networks offering any mention of this big development, CBS and NBC failed to cover the story on both their morning and evening newscasts, respectively. [MP3 audio here; Video below]

Meanwhile, ABC World News Tonight with David Muir covered the story in its Wednesday night program with a segment from ABC News correspondent Steve Osunsami that lasted about a minute and a half.

Anchor David Muir introduced Osunsami’s segment by saying that it was “[a] major headline” in this ongoing story and Osunsami followed by noting the autopsy’s findings in the Post-Dispatch story, which concluded that Brown had marijuana in his system at the time of his death and that “he suffered one of nine gunshot wounds while he was either in or alongside Officer Darren Wilson's police SUV.”

Osunsami described the findings as “important” since police and Wilson “have been arguing that Brown violently fought with Wilson inside the vehicle and went for the officer’s gun, after Wilson told Brown and a friend to get out of the street.”

The story in the Post-Dispatch said that Brown “was shot in the hand at close range” and quoted the St. Louis medical examiner, who has no role in the investigation, as saying that the autopsy “does support that there was as significant altercation at the car.”

Additionally, sources told the paper “that Brown’s blood had been found on Wilson’s gun” and “tissue from Brown was wound on the exterior of the driver’s side of Wilson’s vehicle.”

On Saturday, The New York Times reported in a front-page story on what Wilson (according to sources) had told a St. Louis grand jury about what had transpired as they continue to investigate what happened and whether or not to press charges against Wilson.

CBS and NBC last covered the Brown case on Saturday when CBS This Morning: Saturday, the CBS Evening News, and NBC’s Today ran stories based on what the Times reported.

The portions of the transcript that mention the Michael Brown case on ABC World News Tonight with David Muir on October 22 are transcribed below. 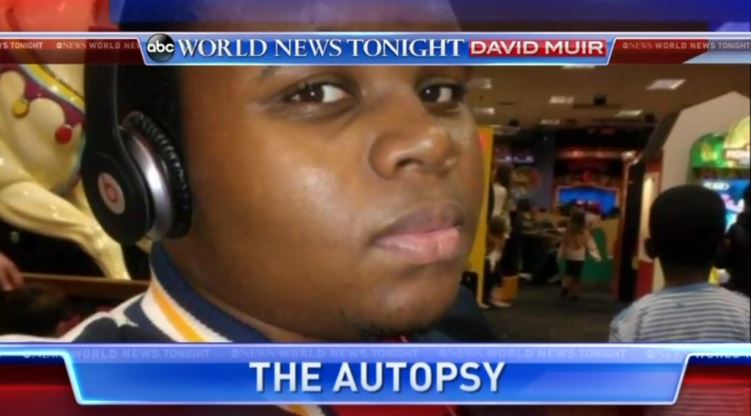 DAVID MUIR: The autopsy, what it reveals about the unarmed teen shot by police outside St. Louis. What the report now suggests about a moment before he was shot.

MUIR: A major headline out of Ferguson, Missouri this evening. The autopsy results now published for Michael Brown, the unarmed black teen gunned down by police. ABC's Steve Osunsami with what the report might reveal about the moments before the shooting. 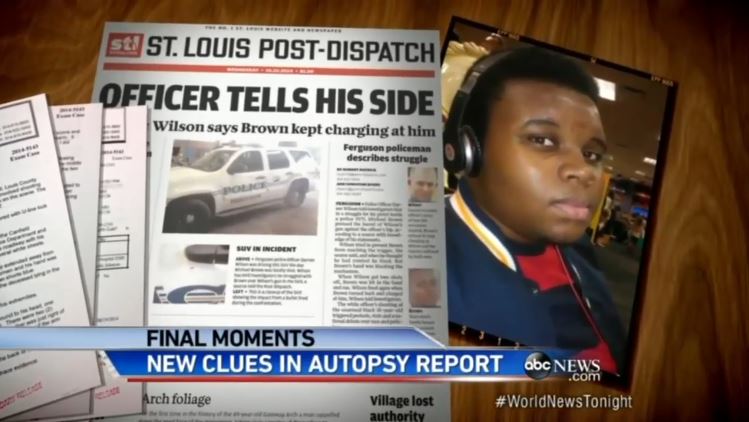 STEVE OSUNSAMI: The full county autopsy report, published in the St. Louis Post-Dispatch, shows that Michael Brown had marijuana in his system, and that he suffered one of nine gunshot wounds while he was either in or alongside Officer Darren Wilson's police SUV. That's important because police have been arguing that Brown violently fought with Wilson inside the vehicle and went for the officer's gun, after Wilson told Brown and a friend to get out of the street. According to the autopsy, Brown's tissue fragments were found on the exterior surface of the police officer's motor vehicle. It's yet another leak in the investigation, suggesting that a grand jury here, looking into the shooting death, may end up siding with the police officer. In a statement today, Brown's family says this still doesn't explain why Wilson kept firing at their son, “and killed him even though he was more than 20 feet from his patrol car.” Police are bracing for more fights with demonstrators.

UNIDENTIFIED FEMALE PROTESTER: This is the chains being broken, this is the fight back.