Over on CBS, it continued to ignore these poor numbers as the CBS Evening News made no mention of them on its Tuesday evening newscast. In contrast, NBC Nightly News both unveiled and discussed its own NBC News/Wall Street Journal poll.

His overall approval rating of 42 percent was one point off of his lowest number measured in ABC News/Washington Post polling.

Earlier in the day, ABC’s morning news show, Good Morning America, offered only a mere sentence on its own poll showing Obama’s foreign policy disapproval rating at 56 percent (which they failed to mention is a majority of Americans for the first time).

Returning to NBC Nightly News, it highlighted the latest version of its own polling, which showed much the same story for the President. Their poll cited only 32 percent of Americans as approving of how President Obama is doing his job when it comes to foreign policy with 62 percent disapproving.

NBC News political director and moderator of Meet the Press Chuck Todd told anchor Brian Williams that “[h]e’s got a major political problem on his hands” with numbers like these as his approval rating on foreign policy “has just plummeted.”

Todd observed that “[i]t's a huge spike this summer and it has all about what has appeared to be unsteadiness in handling this ISIS crisis.”

He also reported that the poll found 47 percent of Americans feel less safe then they did before the 9-11 terrorist attacks, which is the highest number since NBC News/Wall Street Journal polls began asking the question in 2002.

To Todd’s analysis, Williams inserted some favorability toward Obama and opined that “we’ll have answers tomorrow night” after the President’s speech from the White House.

The almost nonexistence of reporting on polls concerning President Obama is nothing new as study released on Monday by the Media Research Center showed that the networks of ABC, CBS, and NBC have worked to largely bury Obama’s bad polls.

The complete segment that aired on NBC Nightly News on September 9 is transcribed below.

BRIAN WILLIAMS: And our moderator of Meet the Press and political director Chuck Todd with us here in New York with more on these new poll numbers. 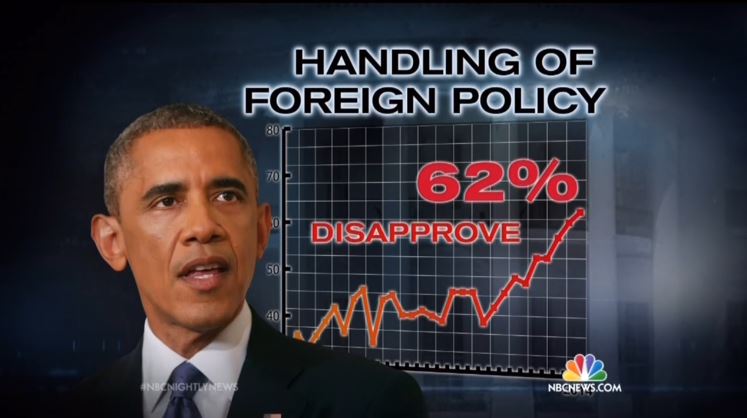 CHUCK TODD: Look, the spike in the 9/11 fear all comes from the coverage of the beheadings of the two American journalists. The most followed news story that we've tracked in five years and that's where the anxiety level comes from and that's why we've seen such a flip on somehow, we now want to see intervention in Syria. 61% in our poll say they would like to see some military action, including 33% who would actually like to see us send combat troops. Talk about a flip. A year ago, we were talking about military strikes in Syria. Well, a year ago, only 21% wanted to do that because it didn't impact Americans. That was about chemical weapons and Assad and then Chris just talked about the stakes for the President himself tomorrow night. He's got a major political problem on his hands: Handling a foreign policy on – in our poll has just plummeted. Just 32% approve of the job he's been doing. 62% disapprove. It's a huge spike this summer and it has all about what has appeared to be unsteadiness in handling this ISIS crisis.