Beginning on Monday afternoon, Democrat and former Mayor of New Orleans Ray Nagin began a 10-year prison sentence for corruption charges that were as result of his actions following the landfall of Hurricane Katrina and subsequent flooding of the city in August 2005.

When it came to reporting on the story during their evening newscasts, ABC World News Tonight with David Muir refused to cover the story while NBC Nightly News offered only a 15-second news brief. Over on CBS, the CBS Evening News with Scott Pelley was preempted due to coverage of the men’s tennis final at the U.S. Open.

In the news brief, anchor Brian Williams did allude to Nagin as a Democrat:

Ray Nagin has gone to federal prison, a ten-year sentence on corruption charges for the former Democratic mayor of New Orleans who came to national prominence in part due to his bizarre behavior when Hurricane Katrina consumed his city in the aftermath.

According to an article posted on the Los Angeles Times’s website, Nagin will serve his sentence at federal prison in Texas and “could be eligible for parole after eight years.” An Associated Press article noted that he “was convicted on 20 counts including bribery, conspiracy and money laundering stemming from his two terms as mayor.” The article from the Times reported the bribes totaled more than $200,000 “from contractors vying to help rebuild the city in the aftermath of Katrina.”

As the Media Research Center has reported since Nagin’s indictment in January 2013, ABC and CBS have refused to identify his party affiliation with NBC citing that he was a Democrat only after he was sentenced. When he was indicted, ABC’s Diane Sawyer referred to him as “the face of Hurricane Katrina...then the Mayor of New Orleans fighting for his city.”

When the trial had ended and Nagin was convicted on February 12, the story was much the same. NBC Nightly News side-stepped Nagin’s Democratic affiliation, but had no issue labeling Trey Radel a Republican when he resigned from Congress after pleading guilty to cocaine possession on January 27.

Lastly, when Nagin received his 10-year prison term at sentencing on July 9, ABC and CBS continued to ignore this basic fact about him while NBC’s Brian Williams finally took the step of labeling him the “former Democratic Mayor of New Orleans” (as he did tonight).

The full transcript from the news brief that aired on NBC Nightly News on September 8 is transcribed below. 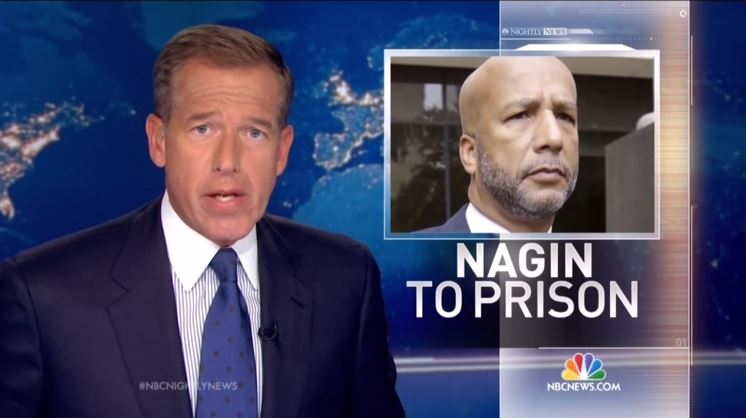 BRIAN WILLIAMS: Ray Nagin has gone to federal prison, a ten-year sentence on corruption charges for the former Democratic mayor of New Orleans who came to national prominence in part due to his bizarre behavior when Hurricane Katrina consumed his city in the aftermath.