The little man has a lot of Hart. 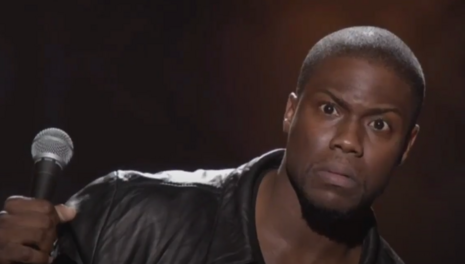 Cancel culture is no joke to Kevin Hart. The comic has weathered the storm and ultimately come out on top each time. As the highest-earning comedian, surpassing even the legendary Jerry Seinfeld, it will take more than some politically correct crybabies to take him down.

In a new interview with The Sunday Times, Hart said he “personally [doesn't] give a s***” about it. “I’ve been canceled, what, three or four times? Never bothered. If you allow it to have an effect on you, it will. Personally? That’s not how I operate.” Kevin Hart is simply “built different.”

One of the more recent occasions when the woke mob moved to Kancel Kevin was in 2019 after some of his old tweets resurfaced mocking members of the LGBTQ mafia. Hart apologized at the time of the tweets and then again after the fact. As the selected host for that year’s Oscars, the Academy presented him with an ultimatum: publicly apologize yet again or the Academy would select another to do the job. Hart chose the latter. He told The Sunday Times, “If people want to pull up stuff, go back to the same tweets of old, go ahead. There is nothing I can do. You’re looking at a younger version of myself. A comedian trying to be funny and, at that attempt, failing. Apologies were made. I understand now how it comes off. I look back and cringe. So it’s growth. It’s about growth.”

Allowing some grace in the public sphere is certainly a reasonable point of view. “”I understand people are human. Everyone can change. It’s like jail. People get locked up so they can be taught a lesson. When they get out, they are supposed to be better. But if they come out and people go, ‘I’m not giving you a job because you were in jail’ — then what the f*** did I go to jail for? That was my punishment — how do you not give those people a shot? They’re saying that all life should be over because of a mistake? Your life should end and there should be no opportunity to change? What are you talking about? And who are you to make that decision?”

The Get Hard star is not denying there be any moral accountability. “If somebody has done something truly damaging then, absolutely, a consequence should be attached. But when you just talk about … nonsense? When you’re talking, ‘Someone said! They need to be taken [down]!’ Shut the f*** up! What are you talking about?” he he said. Hart remarked on the ridiculous plight comedians face today, that “you’re thinking that things you say will come back and bite you on the ass.” Comedians feel compelled to hold back out of fear of being cancelled and as a result, humor dies. “I can’t be the comic today that I was when I got into this,” Hart said.

“When did we get to a point where life was supposed to be perfect? Where people were supposed to operate perfectly all the time? I don’t understand. I don’t expect perfection from my kids. I don’t expect it from my wife, friends, employees. Because, last I checked, the only way you grow up is from f***ing up. I don’t know a kid who hasn’t f***ed up or done some dumb shit.”

Hart’s success demonstrates the will of the people for humor that has no limitations and makes no apologies. “I say this humbly but I’m as talented as F***. I’m really good at what I do.”