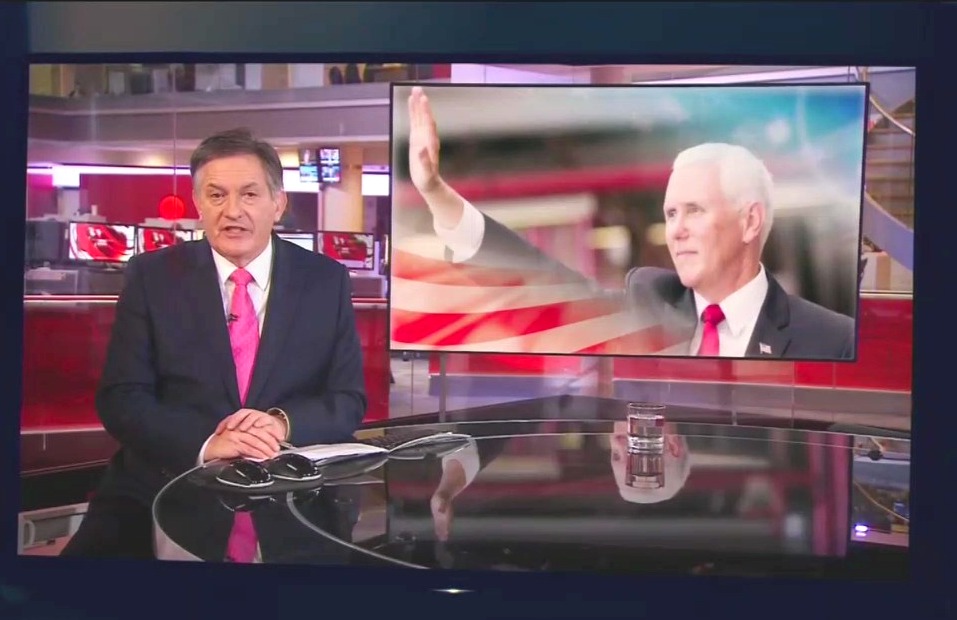 On the second episode of BBC’s Years and Years, which aired in the United States on HBO July 1, the woes of the Lyons family have become more catastrophic.

A year has passed since the nuking of the Chinese island of Hong Sha Do in the final days of the Trump presidency, which has brought about sanctions and trade wars. Edith (Jessica Hynes) returns from her years-long trip to Asia, but she has a shortened expected lifespan due to radiation exposure from being near the island, a detail her family learns of while watching her do a television interview.

A news montage portrays a less than ideal world with President Mike Pence in office.

Edith (on TV): Okay, that might be true, but never mind me. Hong Sha Dao will have consequences for all of us, and it terrifies me. Because the world keeps getting hotter and faster and madder. And we don't pause, we don't think, we don't learn. We just keep racing to the next disaster. And I keep wondering what's next? Where are we going? When's it ever going to stop?

Woman on TV: But we're making it worse. The more we impose sanctions, the more America swings to the right.

Edith says sanctions are needed against America because “they turned a trade war into an actual war.” Members of Edith’s family are against the sanctions, and suffering personally for it. “And who pays the price?” Celeste (T'Nia Miller) asks, while watching Edith’s interview. “Me.” Let’s not forget the viewers subject to this propaganda.

Stephen (Rory Kinnear), his wife Celeste, and their daughters are forced to sell their house and “downsize” since she’s out of work. “My bosses are basically American, so with all these sanctions, they're going to withdraw,” she explains. It doesn’t even look like she’ll earn severance. By the episode’s end, the bank where Stephen and his family have all of their money has filed for chapter 11 bankruptcy, leading to chaos and rioting in the streets as people show up to the bank to demand answers.

Edith may have left Asia, but she hasn’t left her odd ways behind her. At the news that the "North Pole melted,” she goes on a bit of a doomsday rant, about how she warned people but now it's too late.

In addition to global economic and environmental problems, the Lyons deal with their own personal crises. Daniel (Russell Tovey) is in the process of divorcing from his husband, Ralph (Dino Fetscher), whom he cheated on last episode and is now living with that young man, Viktor (Maxim Baldry), a Ukranian asylum seeker. Viktor, who is detained and deported back to Ukraine by episode’s end, reveals it was his parents who turned him into the government for being gay. As you might have guessed, it’s chalked up to them being Christians:

Muriel Dan said about your parents...

Muriel: They reported you to the police?

Viktor: In fairness, they thought it was their duty. They're Christians. I mean, it genuinely hurts them.

Muriel: Do you forgive them?

Viktor: I have to try.

Muriel: And you're very welcome here for the rest of your life. Oh, don't cry. You're not going to get a hug or anything.