On Thursday night, the New York Yankees played the Chicago White Sox in the twilit Iowa cornfield where the classic sentimental baseball movie* Field of Dreams was filmed. Kevin Costner, star of the picture, did a ponderous, cheesy monologue as he slowly walked in from the corn in centerfield, followed by the players themselves. “Is this heaven?” he intoned. “Yes it is.” 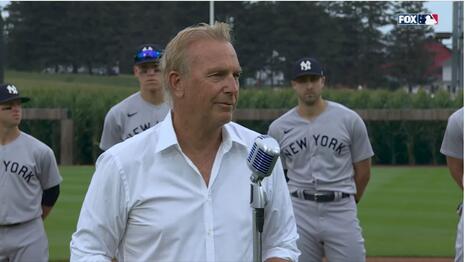 The game turned out great, a classic American League slugfest the White Sox won 9-8 with a walk-off homer. And it seems like a win for baseball. But The Washington Post couldn’t leave it at that, and writer Chelsea Janes told readers “beyond the corn and the sentiment, the evening stood also as an exhibition of contradiction, a reminder of the vast plains between the place MLB wants its sport to hold in the minds of its followers and the reality of its stewardship.”

Some of what she mentioned was valid, like MLB’s idiotic black-out rules that make MLB games so hard to find in Iowa, or the introduction of legal betting to the game of the 1919 “Black Sox” scandal. But this being the Post, she led off with the most important issue of all: race.

So, “as MLB attempts to grow its fan base, fans who see themselves in 'Field of Dreams' are not the only ones the sport needs to reach.”

“See themselves,” means seeing people who look like them. Identity politics has robbed Americans of the moral imagination to see the universal in a work of art.

“White Sox shortstop and Alabama native [Tim] Anderson, for example, said he has never seen the movie, which centers on White baseball legends at a time when Black players were not allowed to play alongside them.”

It also featured a black writer as a main character. But bean-counting is exhausting:

Anderson, one of the game’s brightest young stars and a board member of the Players Alliance, a nonprofit organization of more than 150 current and former Black big leaguers focused on social justice issues, is one of many Black players who have spoken about the challenges Black players face as they try to find belonging in MLB.

He’s spoken about it, but apparently he wasn't speaking to Janes about it last night. “He said that his wife watched the movie this week and filled him in. Anderson also acknowledged wandering through the cornfield before the game and said that he hopes the White Sox can win over some Iowans, even if some of their players don’t have much history here.”

Take that, whitey! Wait, that’s it? Maybe the Hispanic players have some complaints:

José Abreu, who grew up in Cuba, spent most of batting practice pumping his fist and celebrating with Dominican Eloy Jiménez and Cuban Yoán Moncada, every time one of them hit one into the corn. The game may not have had the same significance for everyone who played in it. But it seemed to mean something to everyone.

In other words, the only one talking about race was Chelsea Janes. Fine. Lefty sports writers are obsessed with race. So when she wrote that “MLB Commissioner Rob Manfred announced that the game will be held in Dyersville again next August,” she could have added “unless somebody lies about Iowa’s voting regulations. Then Manfed will yank the game and put it in Denver.

And speaking of Denver, that’s where a moral panic last week led to the Rockies conducting a witch-hunt for a fan who yelled 'Hey Dinger.'"

See, there’s lots of raceball to talk about. It just wasn’t in Iowa.

*“Field of Dreams” is a sentimental favorite, and if you can get past the Boomer 60s nostalgia into the baseball nostalgia, you can see why. “Bull Durham” was the best baseball movie ever, followed by “Major League.” (Don’t even bring up that “Wonderboy” bat garbage!)