The U.S. Women’s National soccer team lost 3-0 to Sweden in their Olympic opener on Tuesday. That probably hurts the team’s chances for the gold. But let’s not forget that this was a victory of sorts too. The U.S. ladies proved they could maintain a busy schedule of politicized grousing, kvetching and posturing, and still find time to lose a soccer game. You really can have it all, gals! 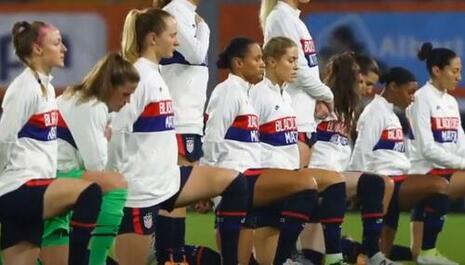 Just in case sports fans forgot how deeply the team feels the world’s every injustice, they and their opponents knelt before the game to strike a blow against racism or something. Then they got down to the business of being trounced.

According to USA Today’s Nancy Armour, the Brat Pack was “completely outclassed by old foe Sweden.” In fact, Armour said, the outcome could have been worse: “The Americans were outplayed, out of sync and, in the few opportunities they did have, off target.”

Oh sure, they missed the net and maybe the ball sometimes. But the Angry Amazons for Equity have other targets dead in their sights: “racist infrastructures,” sexism, and reality based economics.  And attractive women’s lingerie is toast.

Besides, they haven’t been knocked out of the tournament yet. They play New Zealand Saturday. I don’t know anything about the NZ team’s on-field quality, but if the competition becomes a battle of virtue signaling, the American gals shouldn’t be overconfident. Their opponents hail from a nation where environmental groups cancel themselves for racism.