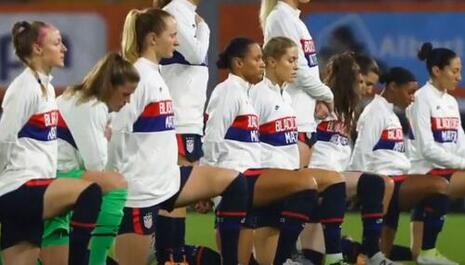 “The players on the U.S. women’s national team wish they could simply focus on soccer.” If you are at all familiar with the USWNT, you just did a spit take. That sentence opens Caitlyn Murray’s March 30 Yahoo Sports article on the team, and it’s a genuinely funny start for a piece about USWNT trying to fit race into an already bulging portfolio of things to be aggrieved about.

“For a team that has been as outspoken for as long as the USWNT has been on hot-button issues,” says Murray, “there’s been a glaring omission: race.” That’s because race hasn’t really entered into the ladies struggle against basic economics. They’ve mostly been stamping their cleats to be paid the same as the men’s team.

It wasn’t until BLM became radical chic last summer that the gals got woke. “Once games resumed in late 2020, the players all wore training jackets emblazoned with ‘Black lives matter’ and issued a joint statement that said, in part: ‘We protest against the racist infrastructures that do not provide equal opportunity for Black and brown people to fulfill their dreams, including playing on this team.’”

Which racist infrastructures are those? Ladies? Ms. Murray?

“Team captain Becky Sauerbrunn was hesitant to give herself and her team too much credit, though,” says Murray. “‘I'm actually conflicted that it took us this long as a national team to get to this point,’ she admitted recently, ‘because, we for so long, we have fought for so many things: for gender equality, for pay equality, we wear jerseys for LGBTQ, for military. We've never as a group come together to fight for social justice and racial inequality [sic].’”

That’s a good start. In a couple of months Sauerbrunn may be on her knees confessing her privilege. She’ll sound a lot like Cindy Parlow Cone, “current president of U.S. Soccer and a player on the 1999 World Cup-winning team.” Murray quotes her heartbreaking confession: “I never fully understood the struggles that my Black and brown teammates went through on a daily basis because we never talked about it.”

That’s okay, so long as everybody’s obsessing about it now. The groupthink is all, even for those players who didn’t kneel for the national anthem last season, which Murray calls “a rare instance of the USWNT not appearing unified.”

But such reactionary behavior will be stamped out soon, with help from the not at all Marxist-sounding group, the “Black Women’s Player Collective.”

But really, the USWNT wishes it could stick to soccer. Really. Maybe if they formed a Soccer Player’s Collective...