It would be easy to chalk up Salon staff writer Chauncey DeVega’s latest piece to the stress of virus lockdown. It’s a long, ominous and deeply paranoid warning about “racial authoritarians, along with other white neo-fascists” led by Donald Trump using the coronavirus pandemic “to advance their goal of undermining multiracial, pluralist democracy.” It’s just the kind of screed one imagines coming from a mind fevered with the strain of isolation and relative powerlessness. 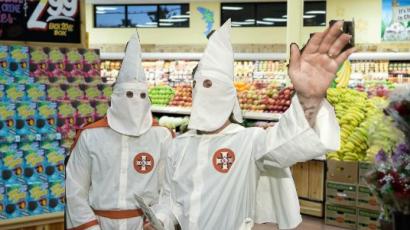 But then you look at what DeVega has been writing for years and realize that ominous and deeply paranoid is his oeuvre. He’s batty. Still, “Trump's darkness: White supremacy, Christian nationalism and the coronavirus” is special even for a guy who gets paid to imagine and write about an America of festering racism, sexism, homophobia and all sorts of related oppression.

The white Christian menace is “using this crisis to engage in terrorism and other acts of political violence — along with other, deeper machinations,” DeVega writes. “Reportedly, some white supremacists have strategized online about how to use the coronavirus as a biological weapon to infect and kill nonwhites, Jews, Muslims and other targeted groups.”

Yeah, there are crazies out there, to be sure. Just today Germany arrested four ISIS members who were plotting to blow up U.S. military bases there. But DeVega’s only worried about certain kinds of terror:

These plots reflect a rising tide of white supremacist and other right-wing violence during the Age of Trump. To point: The Southern Poverty Law Center reports a 50 percent growth in the number of white nationalist groups from 2017 to 2019.

It’s at this point futile to mention that SPLC has less credibility than the Chinese Communist Party. Woke activists like DeVega keep going to the poisoned well of dubious statistics and dishonest allegations.

He goes for slander too. “White supremacy and white nationalism are central to the Trump phenomenon, which has effectively conquered the Republican Party, the right-wing news media and their collective public.”

And get this: “White Christian conservatives are Trump's most stalwart supporters. He enjoys a 99 percent level of support among them. This is the very definition of a cult.” Sorta like the support blacks gave Obama … are we allowed to call them a cult?

And clearly, white Christian conservative cultists are all in it together. How do we know? “Black Americans are much more likely to be both hospitalized and die from the coronavirus than are other groups in the country.” Ahah! How is Trump giving them the virus? Does he send out infected federal agents to lick the doorknobs in black neighborhoods? Well, no. DeVega allows that “There are many factors which explain that disproportionate outcome.”

And every last one of them has to do with -- wait for it! -- “dramatic social inequality” that’s the creation of fascist white Christian nationalist supremacist neo-Nazis. And they aim to use the virus to be mean to everyone else.

“As reported by civil liberties and human rights groups such as the ACLU, the coronavirus is imperiling the lives of people being held in Trump's concentration camps and other detention centers,” DeVega asserts. “Trump's ICE enforcers are also using the pandemic as an opportunity to further terrorize nonwhite immigrant communities by launching raids when so many people are confined at home and therefore easier to target.”

It’s tough to get worked up about the civil rights of people who are in the country illegally and therefore have no civil rights. It is ironic that the most prominent civil rights violations have been against Christians trying to go to Easter service, and that most of the petty tyrants emerging from the crisis are aligned with DeVega -- check out the dictatorship running Michigan right now.

But DeVega accounts for that, and he knows what white people are really on about with their constitution and independence talk:

Trump's followers are not really threatened by the coronavirus — or at least they believe they're not. For them, the coronavirus is a metaphor or representation of a general racial paranoia about a country they imagine as imperiled by changing demographics. The coronavirus is also seen as an imposition on the "freedom" of white people in the form of "big government" and "political correctness" — code words laden with racial resentment and hostility toward "elites" — and as a threat to continued white privilege.

I imagine it's sort of freeing to be able to express such hatred -- and that’s what it is -- with impunity. It must make virus lockdown easier to take. Still, when this is all over, Chauncey should get out more.