Fox Show’s Black Nurse to White Racist Patient Protester: 'How Alt-Right Are You?' 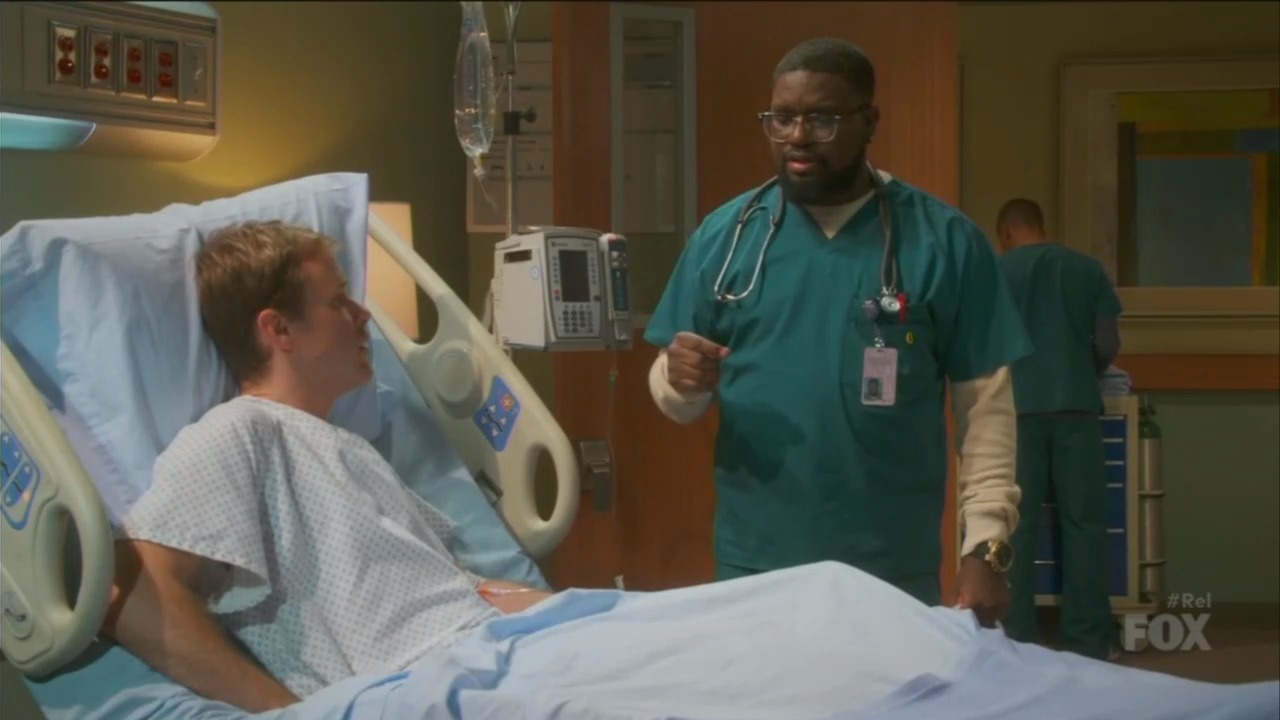 The topic of white nationalists was handled in a heavy-handed way during the December 9 episode of Fox’s Rel. Rel (Lil Rel Howery), an African-American man, is a charge nurse in a Chicago hospital. In “Hate & Hip Hop,” his patient turns out to be a racist who fainted during a white nationalist protest rally. The white patient isn’t impressed when Rel calls him a blood brother, as they both have O negative blood.

Rel explains to Tommy Smith (Josh Duvendeck) that only 7 percent of the population have O negative blood. Rel at first assumes that Tommy was at the protest rally to stand up to the white nationalists. When Rel learns that his patient was a participant in the protest to “take back America” for white people, Rel asks him just how alt-right he is attending his khaki-wearing, tiki torch-carrying protest.

Tommy: What do you mean "Blood brother"?

Rel: I'm just saying only seven percent of us have that blood type. You know what I mean? So you got it, I got it, so you my O negative blood brother. All right, um... I see you fainted at the protest yesterday due to a blood clot. Man, that's crazy, the protest was wild yesterday from what I heard, and they said a bunch of the alt-right dudes showed up with the khakis and the tiki torches. It's good for you standing up for your beliefs.

Tommy: Yeah, I was protesting inequality.

Tommy: And how this country has turned its back on true nationalists in favor of a politically correct global conspiracy.

Rel: So you are actually one of those tiki torch, khaki-wearing alt-right guys. How alt-right are you?

Tommy: This country was founded by and for the white man and we need to take it back.

Rel describes the interaction with his patient to his father and brother once he gets back home. His brother reminds him that Michelle Obama told her audiences, “When they go low, we go high,” but Rel’s father reminds them that a new slogan has replaced that one. He recites the uglier version that former Attorney General Eric Holder told his audience – “When they go low, we kick ‘em.” Rel decides that the only way to try and win Tommy’s respect is to be as professional in caring for him that he can be.

Rel gives it his best shot. Tommy tries to antagonize Rel by asking if he got his job through affirmative action and he even throws the alleged hand signal of white nationalists, the OK formed by his index finger and thumb. Then he demands a white nurse when the time comes for his catheter insertion. A white female nurse tries but isn’t skilled in that maneuver so Tommy, in pain, ends up asking Rel to do it.

After Tommy’s surgery to remove the blood clot that made him faint at the rally, the doctor explains that though the surgery was successful, he required a blood transfusion and Rel was the blood donor. Tommy flips out and even demands the blood be removed. Later, after he calms down, he does apologize to Rel for losing his mind. “You opened my eyes. You’re one of the good ones,” he says to Rel.

Needless to say, that leads to further squabbles. Tommy tells Rel he needs to get off the Democrats' plantation. He explains to Rel that he has been unemployed for three years and he blames it on the “minority” caravans coming and taking jobs. Then, the final blow is when Tommy is told that the insurance he carries through the Affordable Care Act is, in fact, Obamacare. Rel embellishes by telling Tommy that “Barack been paying your bills and you didn’t even know it.”

Tommy: I overreacted yesterday. And you treated me great while I treated you terribly, and you saved my life, and, um, I am sorry. You, Rel, have opened my eyes.

Rel: That's a good first step. I mean, we got to communicate.

Tommy: Yeah. Yeah. Like, you're not living off of government handouts, you're... you're educated, y-you're well-spoken.

Rel: Do you know how racist you sound? I mean, even when you're not even trying to sound racist, you sound racist. How did you get like this?

Tommy: Now, look. You don't understand, okay? It's getting harder and harder for a white man to succeed. Okay? I-I've been-- I've been unemployed for three years because the-- these minority caravans are taking our jobs.

Rel: Okay, whoa, whoa. Okay, bro. You-you...you talking about jobs? For real? First of all, y'all always had the jobs. Okay? And second of all, dude, if you stop going to all these meetings and rallies and just maybe go to a job fair or... ...or take some classes or send a résumé...

Tommy: Okay, you know, o-of course you'd say that. You-you need get off the Democratic plantation.

Rel: Okay, you know something? I-I see what this is. Right? For the first time in your life, you know, you're not just getting something handed to you based on the color of your skin, right? You got to earn it. You got to be qualified. Just a whiny, uneducated, entitled little punk. I'm not gonna waste my breath with you no more. I did my job, you'll be discharged shortly. Oh, and I forgot. Uh, we're gonna make sure we bill your Obamacare.

Tommy: I-I do not have Obamacare. I have health insurance through the Affordable Care Act.

Rel: Well, I hate to bust your bubble. That is Obamacare. That's right. Barack been paying your bills, and you didn't even know it. Surprise.

Of course, Barack isn’t paying anyone’s bills but his own because Obamacare is funded by taxpayers. Americans pay for it whether they want to or not. The Affordable Care Act was not some benevolent move by a generous Barack Obama. It was the takeover of 1/6 of the American economy and still doesn’t provide everyone uninsured person with health care insurance.

The episode could have been worse, I suppose. Rel could have succumbed to the more ridiculous suggestions given by his father, for instance. His father encouraged him to put Ex-Lax in his drink or to leave a thermometer in Tommy’s behind. Rel decided to be professional and try to earn Tommy’s respect. Along the way, the writers of the show take every liberty to include every hyperbolic stereotype possible. It’s Trump’s America and this is what we’ve come to expect from Hollywood.