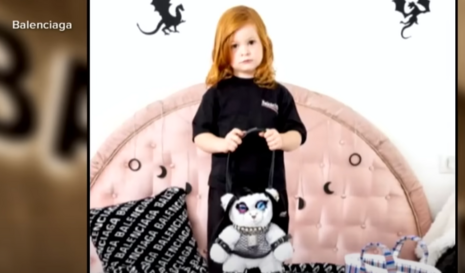 The NFL constantly pumps its woke “Inspire Change” campaign, and Rams’ receiver extraordinaire Cooper Kupp turned that into a positive over the weekend. Cupp slammed Balenciaga for a BDSM-themed ad campaign featuring children.

The fashion company Balenciaga has apologized for the unthinkable ad featuring a child holding a teddy bear dressed in bondage attire.

The most valuable player of this year’s Super Bowl, Cupp wrote a statement demanding Balenciaga be held accountable for this sick, twisted imagery:

“To try to be a voice for our children, who rely on the protection of the men and women that were entrusted the responsibility of nurturing them and raising them up: please make yourself aware of the attack against our young ones by @balenciaga, and ensure that they are held responsible for it.

“For those of us in positions to create change in the way that companies manipulate people and advertise evil, please stand up!”

How refreshing! A key figure in a league known for woke nonsense stands up for children and makes a crucial point on the declining cultural state of the nation.

Balenciaga came under fire for teaming up with Adidas for a second ad with disturbing child abuse imagery. This ad also included language from the U.S. Supreme Court case on pedophilia, United States v. Williams, regarding the distribution of child pornography.

Balenciaga apologized for both ads and indicated it is pursuing legal action against the people responsible for creating them.

Fox News reported the photographer for the “Toy Stories” campaign is Gabriele Galimberti. The despicable photographs have been “mostly scrubbed from the global brand’s website,” said Fox’s Ryan Gaydos.

“We strongly condemn child abuse; it was never our intent to include it in the narrative. Our plush bear bags and the gift collection should have not been featured with children. This was a wrong choice by Balenciaga, combined with our failure in assessing and validating images. The responsibility for this lies with Balenciaga alone.”

To say the least.