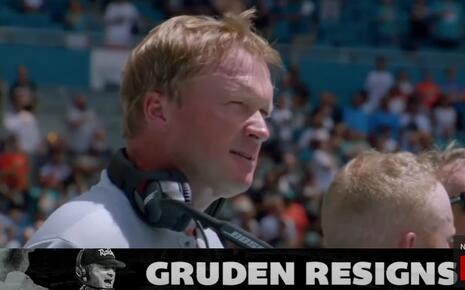 Who came off worse in the Jon Gruden controversy – the lightning rod former coach of the Las Vegas Raiders or the egg-faced National Football League? It may come down to a coin toss.

Gruden stepped down Monday after it was revealed, according to The New York Times, that he “used misogynistic and homophobic language for years, a review of his emails shows. He denounced the emergence of women referees, the drafting of a gay player and the tolerance of protests during the national anthem.”

In one email after the then-St. Louis Rams drafted Michael Sam from Missouri, Gruden said they should not have been pressured into drafting “queers.” The ex-coach also called NFL Commissioner Roger Goodell a “faggot” and “clueless anti football pussy.” In light of cancel culture and the power the LGBT movement has to destroy careers over their word choices, those were reckless things to write down.

Gruden also criticized NFL Players Association President DeMaurice Smith for having lips the size of “Michelin tires.” Smith is black and that was another very stupid thing to say. Gruden tried to excuse it away by claiming he uses the term "rubber lips" when he accuses people of lying.

In a 2012 email exchange with former Washington executive Bruce Allen, Gruden referred to current President Joe Biden as a “nervous clueless pussy”. Denouncing a high-profile Democrat is sacrilege to the left-stream media and won’t win many friends.

The NFL isn't getting off by hiding behind Gruden, either.

“Every rapper the NFL has performing at the Super Bowl has more offensive lyrics than Jon Gruden had in his emails. How does the NFL reconcile the difference in treatment? These are questions all sports media would be asking if they were real journalists..

Then there’s the NFL’s Deshaun Watson scandal. The Houston quarterback continues to draw from his $177 million salary despite being sidelined by his team. He’s been accused of sexually assaulting 24 women.

Watson is currently eligible to play in the NFL, Travis said. “Yet Jon Gruden was just forced to resign as a coach because of years-old derogatory emails. Actions used to matter more than words. Now it’s the opposite.”

Mike Florio, on NBC’s Pro Football Talk, said: “With the Texans content to pay him to not play and with Watson content to not play and get paid for it, the NFL has no reason to do anything about it. He’s already on paid leave." Just another lovely scar on the NFL's badly battered face.

How bout the Urban Meyer mess, too? The 0-5 Jacksonville coach was caught on camera touching a woman not named Mrs. Urban Meyer below the waist. His team is concerned about the incident, but the NFL is not. He previously resigned in disgrace from his coaching job at Ohio State for sitting in confidence of the knowledge that one of his assistant coaches had abused his wife. But he found a home in the NFL, along with so many other scoundrels.

It’s just another day, another shameful day for the NFL. Heads or tails on that coin toss?